Teachbytes
Home Sports ‘A game we obviously should be winning’: Maple Leafs subpar in yet... 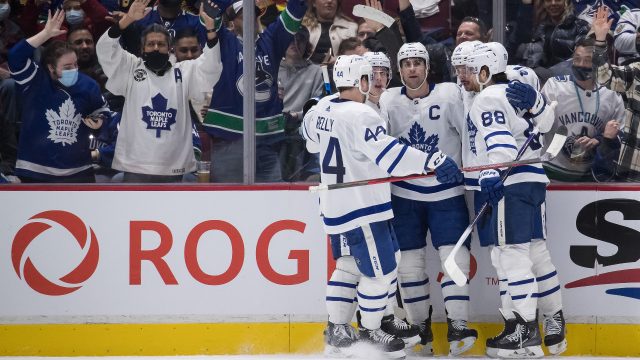 TEMPE, AZ — Normally, when you limit your opposition to a grand total of two shots in the first period and enter the third period with a lead, the win should be a lock. Normally.

But little is normal at the 4,600-seat Mullett Arena, a cozy but raucous NHL barn literally cast in the shadows of Arizona State’s Sun Devil Stadium to the west and Sun Angel Stadium to the east.

The metaphor writes itself.

No, the Arizona Coyotes — both rebuilding and in need of one — are not the big man on campus.

And yet, whenever the Yotes draw the Toronto Maple Leafs, with their deep pockets and grand Stanley Cup aspirations, they show up huge.

It should not be normal that a talent-thin, lottery-bound squad owns Toronto, but that has been precisely the case in 2022, when Arizona has triumphed in all four meetings.

With Vince Vaughn along the glass and Michael Phelps drowning in the din, the Coyotes rallied for a 6-3 comeback home win Thursday, spoiling another Auston Matthews homecoming and sending their half of Mullett’s split-partisan attendance home happy.

Blame some missed execution and ill-time penalties on the Leafs’ part. Credit some smart coaching by Arizona’s André Tourigny, whose players made it difficult for the Leafs to weave through the neutral zone and is dragging out game-breaking performances by the likes of Jack McBain and Nick Bjugstad.

Or raise an eyebrow at Toronto’s goaltenders, who are showing signs of sliding back down to earth.

On this night, both Keefe and perpetrator Conor Timmins — who otherwise had a fine performance — pointed to the defenceman’s careless high-sticking of Christian Fisher as a turning point. Because J.J. Moser scored on the ensuing power-play and gave the home side life.

“I took a bad penalty early in the third period, let them back in, and then it’s a tie game,” Timmins said. “We just got to limit those mistakes, myself especially.”

Morgan Rielly, making his first appearance in more than five weeks, failed to get a bouncing puck deep, and McBain cashed in the winner off a rush.

The Coyotes added a pair of empty-netters and became the first team this season to defeat Toronto in regulation when trailing after 40 minutes.

“That’s a game that we obviously should be winning and gave it away,” lamented Alexander Kerfoot.

The Maple Leafs are back in action on New Year’s Eve in Colorado, where they’ll have a chance to tighten up and end their road trip — and 2022 — on a winning note.

• New fourth-liner Dryden Hunt made himself noticed in his eight-minute Maple Leafs debut: a team-high six hits, a fight, a shot on goal, a drawn penalty that led to a power-play goal, plus some diligent work on the forecheck.

Hunt admits he was getting anxious to play after 10 days without action since his trade from Colorado.

“The team was playing great without me. But you watch a couple games and look at the lineup and kind of see where you fit and what the team needs. I try to bring that energy and be that reliable guy that can kind of change momentum when need be,” Hunt says.

• A fine night for revenge.

“I’m just playing with great players and in a really good system that fits my game,” Timmins says. “We’re on a winning team, and guys are doing a good job finishing.”

The Leafs cannot trade either pick until the Coyotes make their choice.

• Following in the footsteps of Keefe and Dallas Eakins, the Marlies’ Greg Moore was named head coach of the North Division at the 2023 AHL All-Star Classic, which takes place Feb. 5-6 in Laval.

Moore’s squad leads the division at the turn of the calendar with a 19-8-1-1 record.

“In the dressing room, he credited it to the team and the players, which is a part of it. But you have to want to play for your coach in order to win,” Marlies captain Logan Shaw said. “The way he’s got our team working, everyone’s pulling in the same direction. It’s nice to see, and it’s very well deserved.”

• Speaking through a swollen mouth, Zach-Aston Reese says he has a sore tooth and needed eight to 10 stitches mostly on the inside of his mouth to repair damage from Tuesday’s uncalled high stick.

The checking winger says he appreciated Coach Keefe going to bat for him after the injury (to the tune of a $25,000 fine no less).

“Just a little rattling. I’m not getting on the scoresheet as much, so it would’ve been nice to be able to draw a four-minute power-play for the fellas going into overtime,” Aston Reese says.

“I don’t really want to comment on the refs or anything like that. We’re all trying to do a job, and unfortunately they missed what I thought was a high stick.”

Every Fashion Person Owns One of These 29 Sneakers That Are...