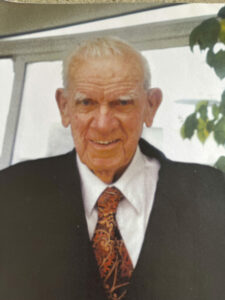 As part of the Howick 175 events and celebrations, we have asked Howick/Pakuranga residents to share some of their memories. Today Pam Taylor shares excerpts from a story written by her late father Norm Robertson recalling memories from when he was 8-years-old.  Norm passed away in 2010 at the age of 88 years.  He led an amazing life.

Fifty years ago I was a schoolboy, the same age as Gavin, my grandson.

I would like to tell you about a hitch hike from Pakuranga to the then little village of Howick. Even in those days, hitch hikes were the in thing.

Walking along the Pakuranga Highway, I got as far as Roberts Road which is on top of the big hill when out from his farm came old Joe Roberts driving a four-wheeled dray or cart pulled by two handsome grey horses.

“Where are you going young fellow?” he asked.

Without any further to do he told me to jump up beside him. Sitting high p beside Old Joe (his nickname), I was able to view the countryside as we travelled along at a steady pace. Old Joe was one of the first pupils at the Pakuranga School and his folks were among the first to farm at Pakuranga.

Down the hill we went and we got a cheery wave from Mr Norm Millen, his brother-in-law, who was working on his farm.

“Bring me back a sack of chaff when you come back for my horse will you Old Joe,” he asked.

We carried on down to the bottom of the hill passing the little Presbyterian Church on our right. Climbing slowly up the other side of the hill we passed Mr Archie Millen’s farm Marvon Downs with well-cut hedges, clean paddocks and first-class fencing. Old Joe and Mr Millen were also brothers-in-law.

There was a lot of activity on Marvon Downs this day because the Pakuranga Hunt Club were starting their meeting here. What a wonderful sight to see, the Master of the hounds in his red coat, white pants, black [riding hat] and his horn calling his hounds to bay, 50 of them, all barking and wagging their tails, eager to set off on the hunt.

Ladies and gentlemen [were] all done up in their finery with old Mrs Smith, the Master’s wife, riding side saddle. [There were] even boys and girls on their ponies and none looking better than Shirley Millen riding her pony Bubbles.

Soon we passed Matson Farm then the Pakuranga Hall which still stands today. This hall was the meeting place for the locals. What great dances they used to hold there. Women always wore long evening dresses and the men looked smart in their best suits.

The ban comprised a piano and saxophone and a set of drums. About a quarter of a mile further on at the corner of Bucklands Beach Road was the Pakuranga Post Office. It had the dubious honour of being one of the smallest post offices in New Zealand. It would be approximately 2 ¼ metres wide x 3 ½ metres long. The Post Mistress was Miss Alice Webb, a cheery old soul who knew everyone in the district.

We continued on down the gentle grade and around the bend and passed the old Pakuranga School. Mr Meleville was the headmaster, a real dour Scot while Miss Williams was his only assistant. They taught all classes up to Std 6. The total number of pupils at school while I was there was 52.

Not many for a whole school but when one counted the houses from the Panmure Bridge to the school, the tally would only have been about 20.

The Pakuranga Highway were driving on was concrete and it was the only road in the whole of the districts of Howick, Pakuranga or Bucklands Beach that was not metal.

The first road past the school is called Hutchinson Road and here we saw Mr Connelly driving home. He was the local dog ranger. Up the hill and around the bend [we] passed Botany Road. There was no school or shops built in 1930, just the Presbyterian Church.

As we carried on we passed Alexander Farm on our left and Mr White’s garage on our right. It was on the site where Auckland Motor Company now has their big building. Another gentle climb up to Bleakhouse Road corner.

This road got its name because one of Charles Dickens’ relations built a house in this road.

Around the corner passing Mr Kelsey’s house and it was from here that most of the residents from Howick had their milk delivered, once again by a horse-drawn float.

Next point of interest, we passed was Stockade Hill, the site of a fort built in the early 1860s for a defence against the warring natives.

At this point we got our first view of the village. The first building was Crawford Bush Shed.

This was the company that started the first bus (horse-drawn) service to Auckland. On the other side of the road was the Volunteer Fire Brigade Station, the old Catholic Church on our left then Rishworths Store.

Not the big grand building you see today but a room built onto the front of a house.

Here, one could buy cottons, buttons, dress materials etc and one would be served by Mr Rishworth, a kindly old chap who always wore a tape measure around his neck.

Every Wednesday afternoon he would drive to Auckland in his old Model A Ford car to get his supplies. In the 1930s, all shops in the village closed at 12 noon but opened on Saturday morning.

The post A hitch hike to Howick Village 1930 appeared first on Times.

5 things to know this Tuesday, January 3

British tourist 45, is killed in speedboat crash near Turkish resort