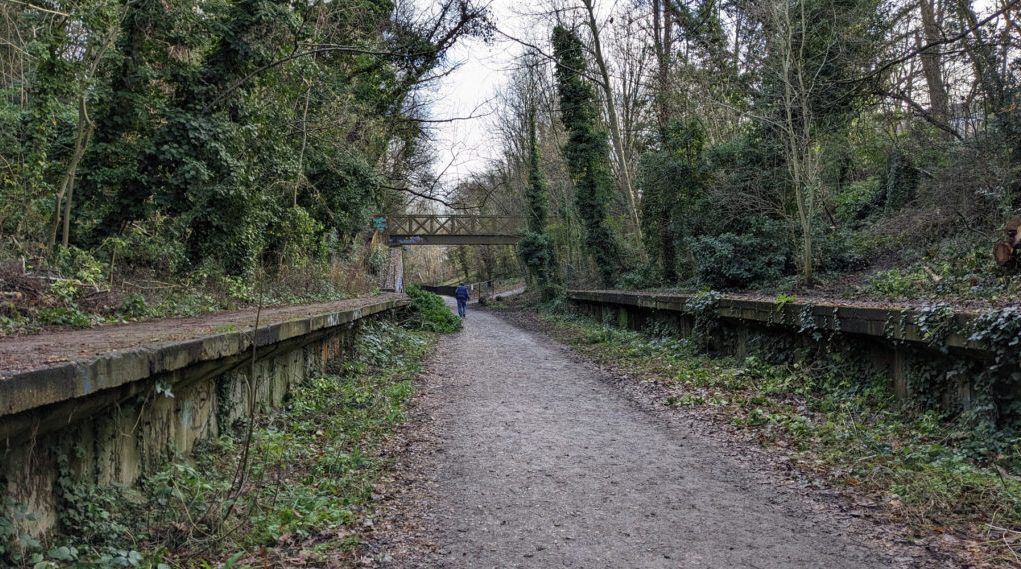 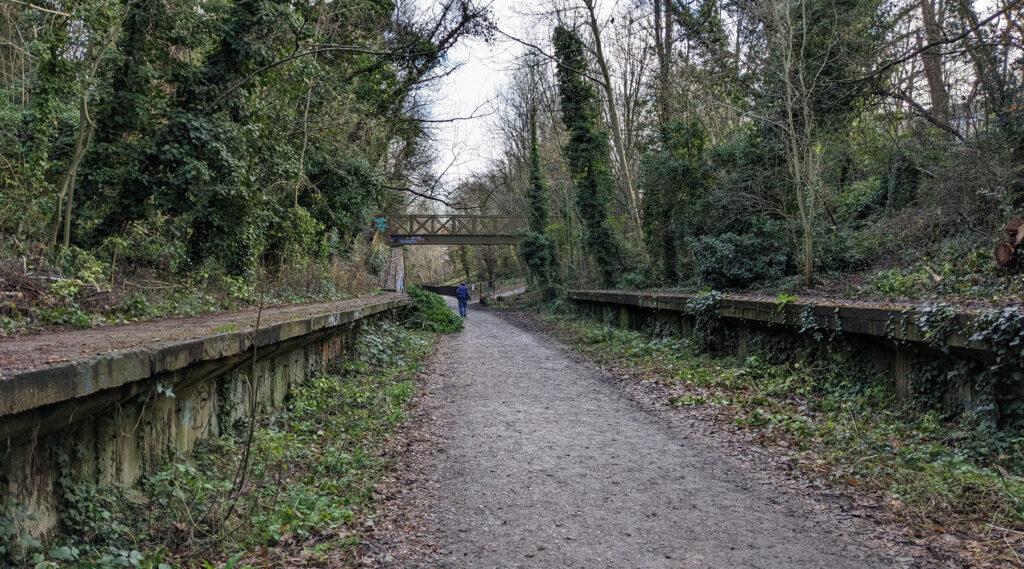 A bit of history

The aptly named Parkland Walk runs along a section of the Great Northern Railway that was authorised for construction in 1862 from Finsbury Park through Stroud Green, Crouch End, Highgate, Finchley and Mill Hill to Edgware.

It opened in August 1867 as a single track railway, but was under severe pressure from overcrowding by 1900. Plans to electrify the line in 1923 came to nought, and then a decade later came the New Works Programme, a post-war project to upgrade parts of the London Underground. This would have doubled the single-track to twin, and run Northern line electric trains from Finchley to Edgware tube station. Although work started, WWII got in the way, and after the war, the combination of increased car use and post-war funding shortages meant the plans were put on hold in 1950.

With dwindling passenger numbers the line was closed by British Railways on 3rd July 1954, and the line closed to goods traffic in October 1970. The tracks were lifted in 1972, and most of the buildings along the line were demolished.

The route was nearly cleared for housing the in the late 1970s, and in the 1980s it was earmarked to be part of a new road. The road scheme was scrapped in March 1990, with the then Transport Secretary Cecil Parkinson calling for more investment in public transport instead.

It’s now managed by the Friends of the Parkland Walk.

Go for a walk along the old railway line

Don’t immediately follow the path though, but take a small detour to the side where the line runs up to the old tunnels that lead to the disused platforms at Highgate station. The tunnels are now a bat reserve, and it’s illegal to disturb them. So don’t.

The rest of the walk is relatively flat, and in many places at this time of year, very muddy path that ranges between deep tree lined valleys and soaring tree lined embankments.

The mud aside, the best time to walk is winter, as the trees are rather naked at the moment, and that gives you really good views at times across this part of London when you’re up on the embankment sections.

Dotted along are a number of bridges, both road bridges walk under or railway bridges to walk over. My walk was punctuated by many joggers and walkers, and dogs, lots of dogs, but interestingly, no cyclists.

About halfway along is something that more than anything you’ll along here reminds you that you’re walking along an old railway line — and that is the remains of Crouch End railway station. The two platforms are still here, which you can either walk along or do something that anywhere else would be highly dangerous – walk along the railway track.

There’s not much else railway wise along here, although you’ll spy the occasional left over bit of concrete posts along the sides, and at times bits of old concrete structures that look suspiciously railway like but would need an expert to confirm.

What you will notice is a couple of what may be WWII anti-tank blocks still here and covered in graffiti. And I was terrifically pleased to see an old date sign from when the railway was first built which I spotted in the undergrowth to the north of Crouch End station.

More sombrely is the Baby Loss tree, covered in memories of the babies who died mainly during and just after pregnancy. The tree as a point of pilgrimage started in around 2015, and gained a plaque in 2020.

There’s also something else colourful along the route, a protest. There are plans to rebuild the Stanhope Road bridge, which needs rebuilding, but at the same time, the council wants to make the route easier to get to for people with disabilities. However, those plans require ten trees to be cut down and the path to be less muddy, and people are not happy. The irony of having a protest to protect trees happening right next to one of the nature signs telling you about the trees you can see on the walk was not lost on me.

The outcome of this conflict between nature and accessibility is one that will likely please no one though.

The walk though is a delight, just muddy enough to be unsettling at times, but that’s the weather for you – it’ll be bone dry at other times, but also wide enough that even at patches where the dog walkers are numerous, it’s never crowded. Unlike say the Regent’s Canal which can seem very busy at times because of the narrow corridor to walk along.

It’s about a mile and a quarter of walking behind the backs of houses along a route that was once a railway, nearly a road, and now a nature reserve.

Along the route are a number of “tube map” style signs showing the highlights, and I noticed afterwards that the little walking figure that shows where you are is always walking towards Highgate, so it seems that I walked the route backwards.

(You can also continue further north around to Alexandra Palace, I am saving that for another day) 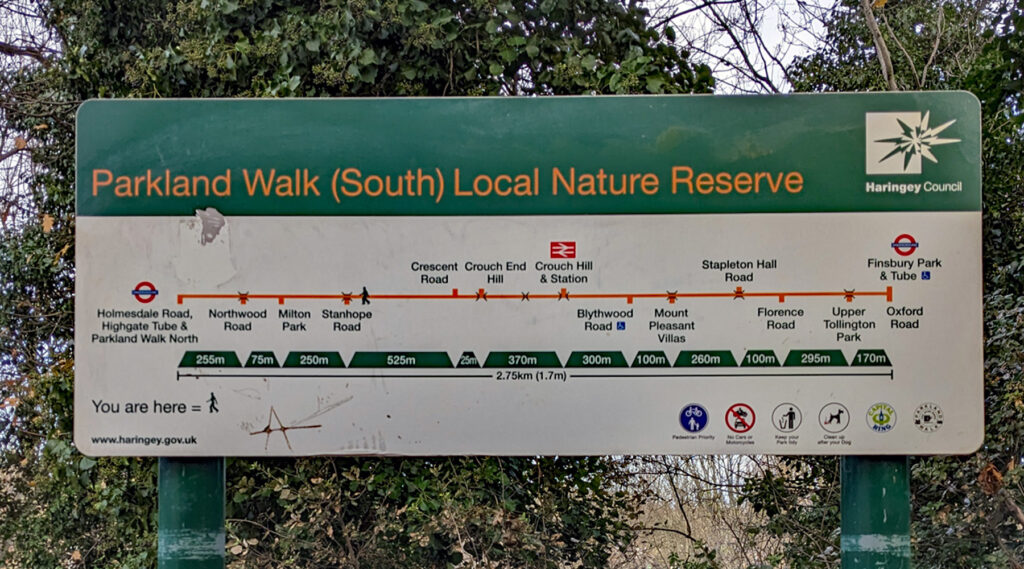 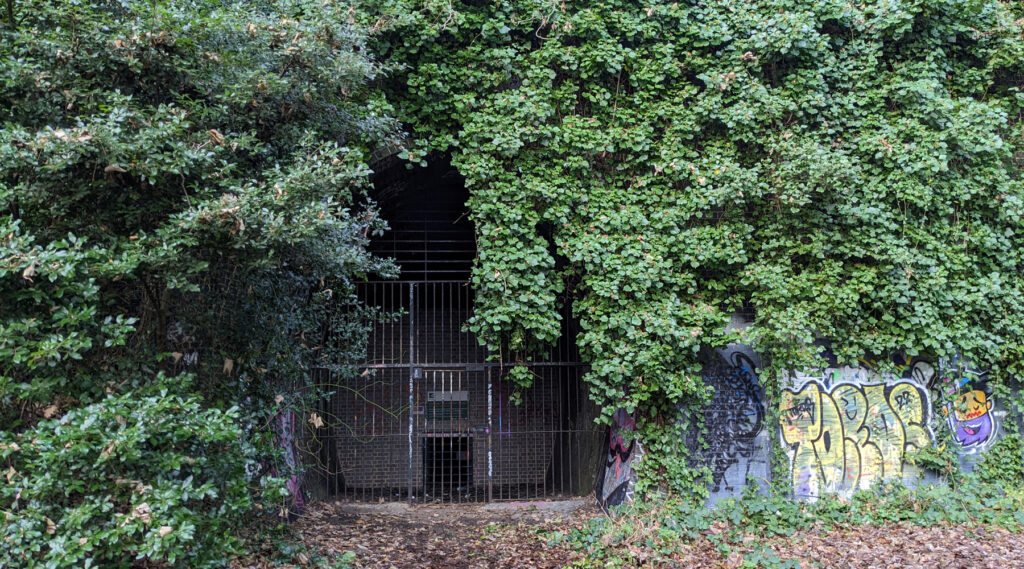 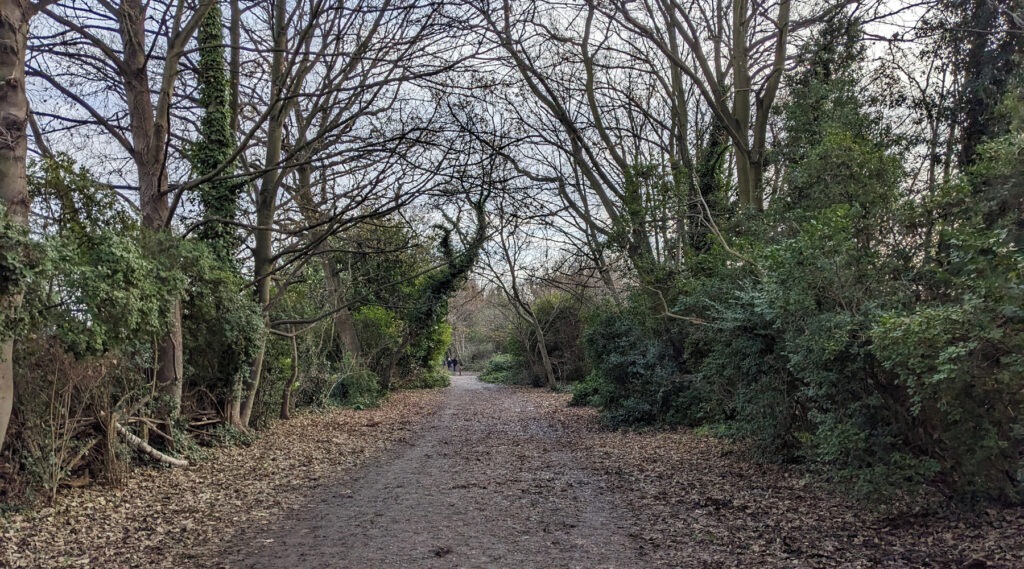 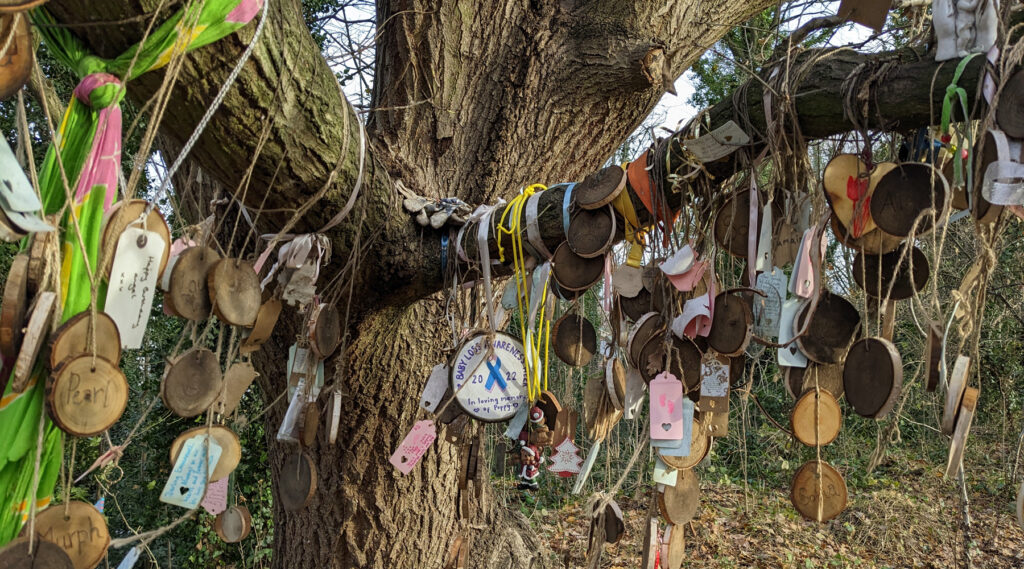 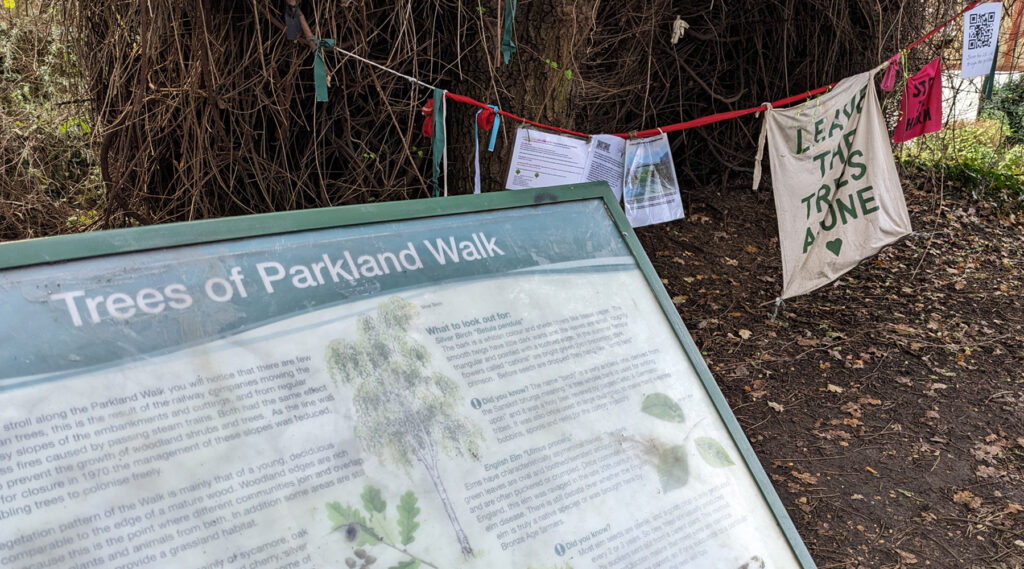 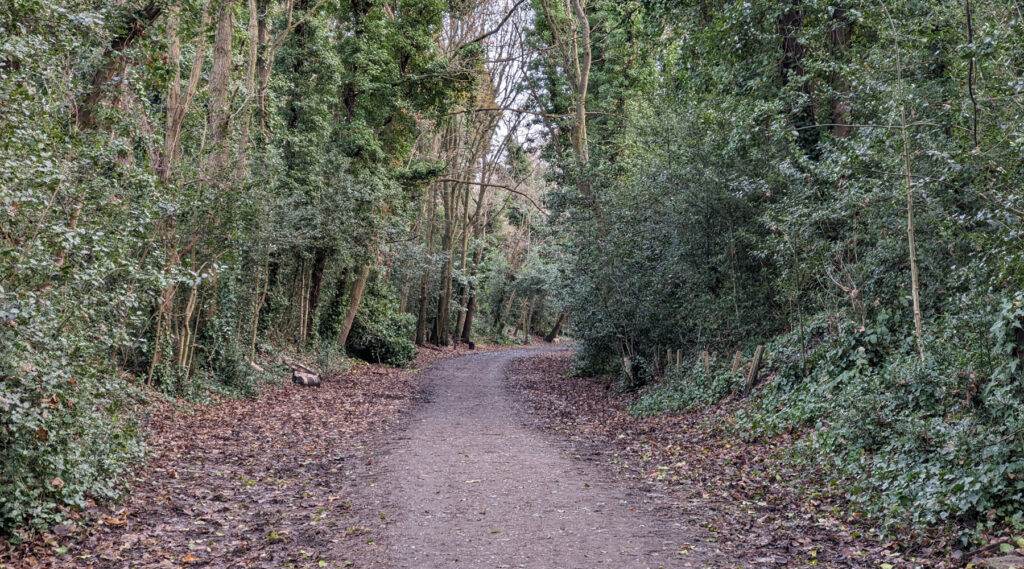 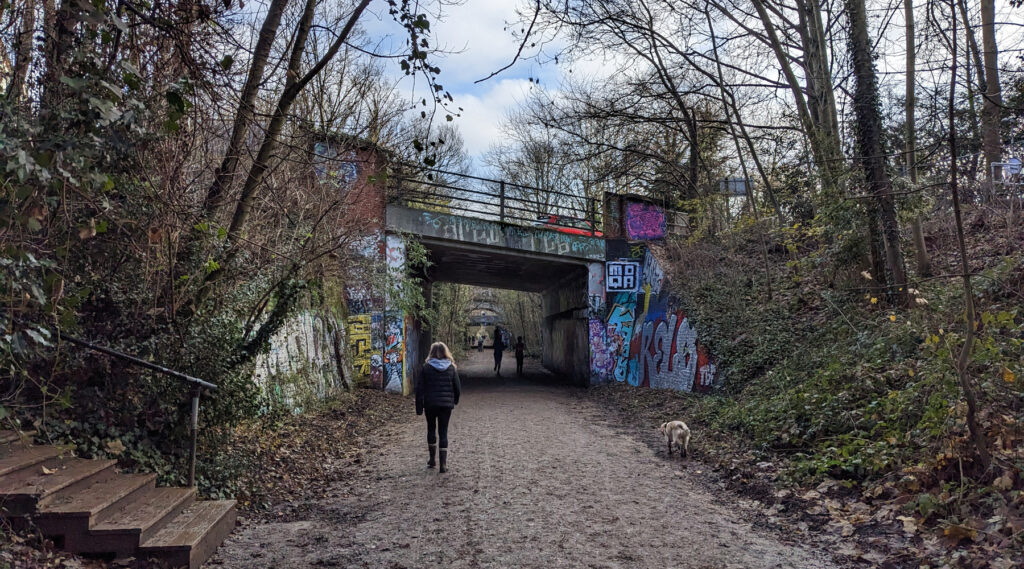 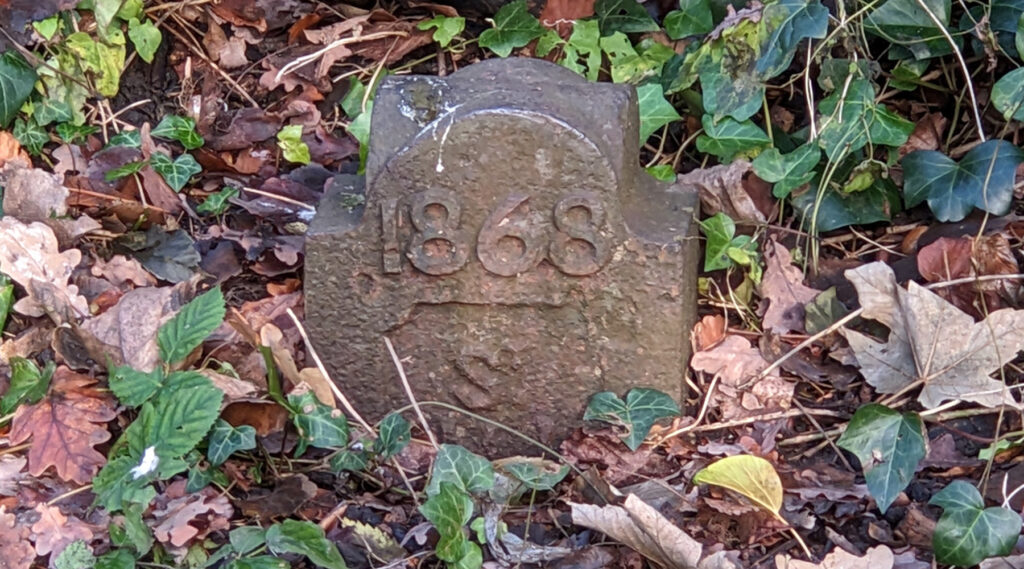 The post A parkland walk along a disused railway line appeared first on ianVisits.

Could Twitter Force Musk to Close the Deal? Here’s What We...

Did the Vikings Just Play the Craziest 2-Week Swing in History?