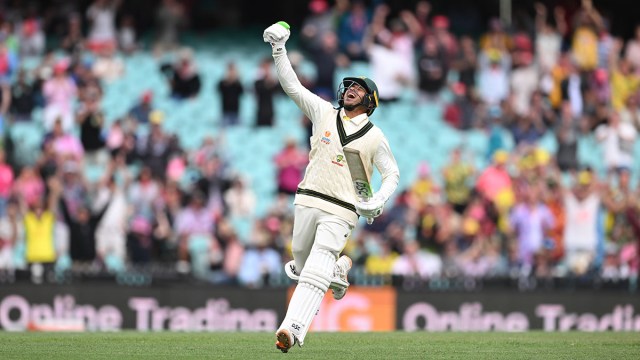 Usman Khawaja has celebrated the one-year anniversary of his return to the Test team, with his fifth century in 12 months helping Australia to 4-475 against South Africa.

Khawaja was on the verge of his maiden Test double century when rain stopped play in the last session on day two of the third Test, unbeaten on 195 after he and Steve Smith both struck tons.

Travis Head then motored along to 70 off 59 balls in an entertaining final session, continuing his swashbuckling summer, striking at more than 95 with an average of 87.5.

Having already wrapped up the series, Australia is now laying the platform for a 3-0 whitewash and the chance to lock in a spot in June’s World Test Championship final.

Only rain looks likely to stand in its way, with more wet weather forecast on Friday and Saturday after a dark day one.

In superb form since he was recalled to Australia’s team last January, Khawaja has averaged more than 75 since his comeback.

Unable to hold down a spot for the majority of his Test career, 36-year-old Khawaja is now enjoying one of the great late-career resurgences at the top of the order.

After resuming on 51no on Thursday, the right-hander worked the ball off his pads nicely and hit out-of-sorts spinner Keshav Maharaj over cover for six.

He also helped take 14 off one Kagiso Rabada over in the middle session, cutting the South African quick for four and then twice guiding him to the third-man boundary.

The one opportunity he offered up also went for four, middling Rabada to Anrich Nortje at point before the ball brushed the quick’s pants and flew to the rope.

Smith, too, looked at home against the Proteas’ bowling before becoming Maharaj’s first victim of the tour on 104.

He had earlier cleared the rope off both of South Africa’s spinners, dispatching Maharaj (1-108) over the legside and Simon Harmer back down the ground.

He brought up his 30th century pulling Nortje for four, becoming the fourth Australian to reach the milestone.

Such was Australia’s dominance, when Smith was caught and bowled by Maharaj, it was hard to tell if the batter or SCG crowd were more shocked.

He hit eight boundaries all around the ground and a big six down back over Maharaj’s head, before eventually being caught off the bowling of Rabada (1-119) on the square-leg boundary.

South Africa’s long day in the field adds to a lengthy list of tough days on this tour, with Maharaj and Rabada both poor and Nortje the only threatening bowler with two wickets on day one.

The post Another Usman Khawaja ton at SCG drives Australia towards 500 against South Africa appeared first on The New Daily.

Why You Should Go To… Folkestone

5 things to know this Thanksgiving Day