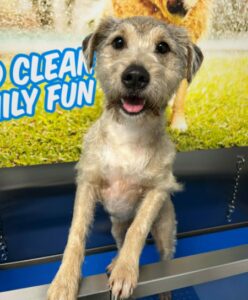 If George the dog could talk he’d have a heck of a tale to share.

The almost three-year-old pooch, who’s a mix of Fox Terrier, Jack Russell and Miniature Schnauzer breeds, was at his owner Delaney Ferabend’s workplace at a Botany pet store on August 30 when he escaped at about 11am.

Delaney had briefly headed to Kmart to get a charging cable when she received a phone call from her manager saying George had “done a runner”.

“He got out of his harness and chased a German shepherd out of the store,” the 19-year-old says.

“He went across to where McDonald’s is and then Paradice Ice Skating.

“Everyone saw him run from there but he’s very timid so he bolted straight away.”

Her mother Nicky Davison arrived and they launched a search.

“We went out and looked for him, just driving around for two hours,” Delaney says.

The area George went missing in was unfamiliar to him as he’d been staying with Davison in Maraetai.

He somehow managed to get across Ti Rakau Drive unscathed and then vanished.

The days turned into weeks and then months as Delaney and her family and friends tried to find him.

They publicised his disappearance on Facebook and put up posters in the area calling for sightings of him.

“It was terrifying,” she says.

“We tried everything and as soon as someone said they thought they’d seen him we were out there looking.

“There were so many days we were in the rain looking for him and calling for him in the bush.

“He went all over the show, all around Botany.”

George was seen on people’s properties near Point View Drive and in Kilkenny Park in Dannemora.

“We looked there for about a week,” Delaney says.

“He stayed in that area for quite a while so we were out there most days looking for him.

“We put flyers out and everything. It was definitely stressful.”

She says George is a “big cuddler” so while she had high hopes he was surviving she was also wondering how he’d cope.

“It was raining, the weather was terrible at the time and it was starting to go into spring and was really hot some days.

“Everywhere he was seen there was running water, like freshwater streams, so we thought that must be where he was drinking from.

“But he’s such a baby and always has to be near us, cuddling us, and have us nearby.”

Delaney and her family became increasingly upset as September and October came and went and George was still missing.

“I was crying most nights [at] the thought of him being out there by himself, not knowing where he is or what to do,” she says.

“It was very nerve-wracking and it was coming to the end of the two months.

“I just thought there’s no way [he’s alive]. It’s been two months, who knows what he’s been eating and nobody’s seen him for a while so there’s no way.

“I definitely did lose hope toward the end of the two months.”

Then, all of a sudden, Delaney received news George had been sighted in a park off Cyril French Drive in Flat Bush.

“We got a photo on a Sunday when I was at work. I got a text from someone and I started balling my eyes out.

“A girl was on her way to school and she saw him in the bush.”

Delaney and her boyfriend headed out again to look for George in the rain to no avail.

Then, three days later, just after 8.30pm on November 3, a miracle arrived.

A dog spooked by fireworks turned up at a family’s East Tamaki Heights home.

The property’s occupants posted two photos of the dog on Facebook and asked if anyone knew the owner.

It was George. Davison quickly saw the post and tagged in her daughter.

“I started bawling my eyes out,” Delaney says.

“I didn’t even know what to do with myself.

“Then I started getting calls from people and getting tagged in the photo. It was so surreal.”

Delaney raced to be reunited with her pooch.

“I got there and the people were so lovely. George was hiding behind the couch.

“I popped my head around and he was wagging his tail and whining and barking from happiness.

“I have to thank the people who found him and looked after him.”

George was taken to the vet after being reunited with his family, which led to the biggest mystery of all.

He somehow managed to gain weight while he was lost in the wilds of east Auckland for nine weeks.

“When we got him back he had no fleas, no worms and wasn’t skinny at all,” Delaney says.

“The vet was shocked. I don’t know how he did it.

“Dogs have instincts for hunting so it must have brought that out of him.

“I’m thinking [he ate] rabbits or rats or maybe even possums.”

She says it’s been amazing to have George back home and she missed him so much.

“He’s been in my life for two years. He’s my best friend.

“He’s always been there for me through everything. It was really hard not having him.”

While George was clearly impacted by his ordeal and has separation anxiety, one positive for his owner is how the community rallied in support while he was missing, with people searching for him and sending her sightings.

“It was so awesome,” Delaney says. “I’ve had people come in to work and say they were so happy I found my dog and I had people constantly calling me and asking for updates.

“I’m so grateful there were people out there looking for him.

“It gives me hope and it’s amazing to see there are still people out there like that.

“I’m so grateful for all the calls I got and for being tagged in posts.”

Madoff lawyer: I would take Trump’s case if asked

How to Master the Layered Blazer Look for Winter