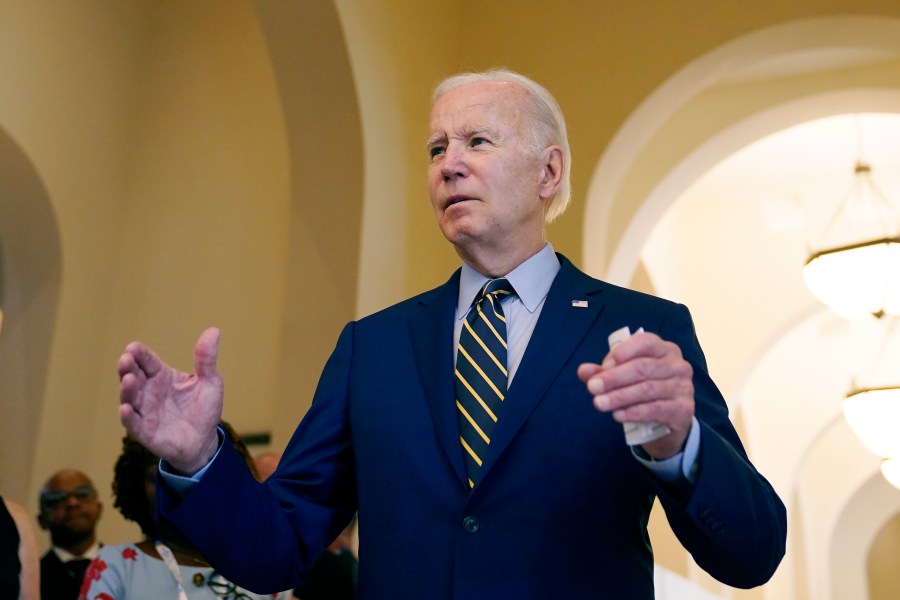 PHNOM PENH, Cambodia (AP) — There won’t be concessions from the U.S. side. No real deliverables, which is government-speak for specific achievements. Don’t expect a cheery joint statement, either.

During President Joe Biden’s highly anticipated meeting with Chinese President Xi Jinping on Monday, the leaders will be circling each other to game out how to manage a relationship that the U.S. has determined poses the biggest economic and military threat.

At the same time, U.S. officials have repeatedly stressed that they see the two countries’ interactions as one of competition — and that they want to avoid conflict.

Here’s a look at what each side is hoping to achieve out of the leaders’ first in-person encounter as presidents, to be held on the island of Bali in Indonesia:

FOR THE UNITED STATES

Essentially, Biden and other U.S. officials are trying to understand where Xi really stands.

In a news conference shortly before leaving Washington, Biden said he wanted to “lay out … what each of our red lines are, understand what he believes to be in the critical national interests of China, what I know to be the critical interests of the United States.”

That mission has become all the more imperative since the conclusion of the Community Party congress in Beijing, during which Xi secured a norm-breaking third term as leader, empowering him even further.

It’s a goal that will be much more readily achieved in person, White House officials say, despite Biden and Xi’s five video or phone calls during the U.S. president’s term.

Biden told reporters on Sunday that he’s “always had straightforward discussions” with Xi, and that has prevented either of them from “miscalculations” of their intentions.

“I know him well, he knows me,” Biden said. “We’ve just got to figure out where the red lines are and what are the most important things to each of us, going into the next two years.”

The U.S. president will want to send a message to Xi on White House concerns about China’s economic practices. Taiwan is sure to come up, and Biden will want to emphasize to Xi that the U.S. will stand ready to defend the self-governing island should it come under attack by China. Biden also will seek to make clear his concerns about Beijing’s human rights practices, as he has in their previous interactions.

Biden will also use the meeting to press for a more aggressive posture from Xi on Russia’s invasion of Ukraine. The Chinese leader has largely refrained from public criticism of Vladimir Putin’s actions while declining to actively aid Moscow by supplying arms.

“We believe that, of course, every country in the world should do more to prevail upon Russia, especially those who have relationships with Russia, to end this war and leave Ukraine,” said U.S. national security adviser Jake Sullivan.

Finally, U.S. officials say they’re eager to see where the two superpowers could actually collaborate. Though there are numerous areas in which Biden and Xi won’t see eye to eye, the White House has listed several issues where they conceivably could, including health, counternarcotics and climate change.

Xi has yet to give a wish list for talks with Biden, but Beijing wants U.S. action on trade and Taiwan.

Perhaps most importantly, the Group of 20 gathering in Bali and the meeting with Biden give China’s most powerful leader in decades a stage to promote his country’s image as a global player and himself as a history-making figure who is restoring its rightful role as an economic and political force.

China pursues “increasingly assertive foreign and security policies aimed at changing the international status quo,” Kevin Rudd, a former Australian prime minister who is president of the Asia Society, wrote in Foreign Affairs. That has strained relations with Washington, Europe and China’s Asian neighbors, but Xi is unfazed and looks set to be more ambitious abroad.

The meeting is “an important event of China’s head-of-state diplomacy toward the Asia Pacific,” said a foreign ministry spokesman, Zhao Lijian. He said Xi will “deliver an important speech” on economic growth.

Zhao called on the Biden administration to “stop politicizing” trade and embrace Beijing’s claim to sovereignty over Taiwan, the self-ruled island democracy that split with the mainland in 1949 and never has been part of the People’s Republic of China.

Beijing wants Washington to lift tariffs imposed by former President Donald Trump in 2019 and to pull back on increasing restrictions on Chinese access to processor chips and other U.S. technology. Biden has left most of those in place and added curbs on access to technology that American officials say can be used in weapons development.

Xi’s government has stepped up efforts to intimidate the elected government of Taiwanese President Tsai Ing-wen by flying fighter planes near the island and firing missiles into the sea.

Beijing broke off talks with Washington on security, climate cooperation and other issues after U.S. House Speaker Nancy Pelosi visited Taiwan in August in a show of support for its government.

“The United States needs to stop obscuring, hollowing out and distorting the ‘one-China principle,’” said Zhao, referring to Beijing’s stance that Taiwan is obligated to join the mainland under Communist Party leadership.

Another goal for Xi: Don’t get COVID-19.

The G-20 will be only Xi’s second foreign trip in 2 1/2 years while his government enforces a severe “Zero COVID” strategy that shut down cities and kept most visitors out of China.

Xi broke that moratorium by attending a September summit with Putin and Central Asian leaders. But he skipped a dinner and photo session where Putin and others wore no masks.

State of the lingo