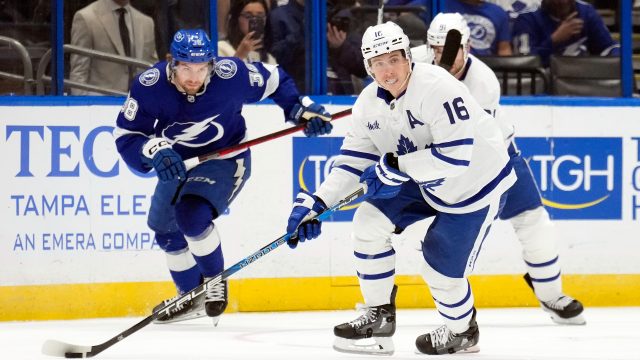 Luke Schenn of the Vancouver Canucks, after a six-hit night, has been crowned the hit king amongst NHL defencemen, passing Brooks Orpik for most hits since the stat has been recorded.

Some 2,947 hits later, the journeyman hasn’t stopped doing what he does best and is now able to say he stands at the peak of his craft. He hit the mark in 888 games.

A couple of days ago Schenn told Sportsnet that he “didn’t really think too much of it,” and that he “doesn’t really care too much about the number,” however as he broke the record, the fans in attendance made sure to let him know how much they cared.

Chants of “LUKE! LUKE!” broke out at Rogers Arena in Vancouver for the new leader in the category.

The 33-year-old has played for seven teams throughout his career and won two Stanley Cups during his time with the Tampa Bay Lightning. On every team he’s been on, he’s done what he does best. Hit.

Five forwards still remain above him on the hits leaderboard: Milan Lucic, Alex Ovechkin, Matt Martin, Dustin Brown, and the recently coronated Cal Clutterbuck sits atop the rankings with 3,647.

It was a celebratory day for the Schenn family, as brother Brayden played in his 800th NHL game across the country as his St. Louis Blues took on the Pittsburgh Penguins. But Brayden still has a ways to go if he wants to catch up to Luke’s physical domination, as the centre only has 1,700 hits to his name.

ALL racing cancelled today for The Queen’s funeral, BHA confirm

Think you know Korea because you love K-pop and watched ‘Squid...