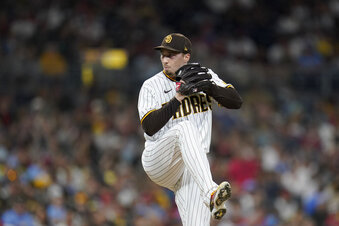 The offensive woes continue for the Cardinals. They get shutout for the third straight game, losing 1-0 to the Padres on Wednesday night in San Diego. The Redbirds haven’t scored since last Saturday night’s 1-0 extra inning win over the Reds.

Padres starting pitcher Blake Snell threw seven shutout innings in Wednesday’s win, striking out 13 Cardinals in the process. Albert Pujols broke up Snell’s no hit bid with a single in the 7th inning. Juan Yepez followed Pujols with a single of his own. Those were the only two Cardinals hits in the game. Josh Hader came on in the 9th inning to pick up the save. The Cards have not scored off Hader since the 2019 season. Miles Mikolas was the tough luck loser, allowing just one unearned run. His record falls to 11-13.

Jack Flaherty will try to avoid the series sweep to the Padres when he pitches on Thursday afternoon in San Diego. The Cardinals magic number remains at six. The Brewers won their game over the Mets on Wednesday.