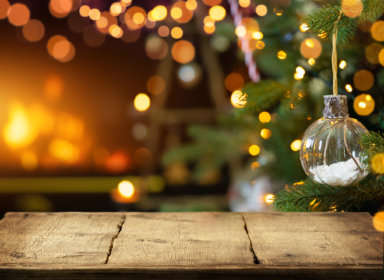 Celebrate the holiday season with these performances all over New York! There’s something on this list for everyone in the family.

The 2022 Christmas Spectacular will feature the new lyrical number “Dance of the Frost Fairies.” The scene centers on the whimsical frost fairies who emerge during the magical first snowfall of every season.

In “Dance of the Frost Fairies,” the Rockettes transform into fantastical, winged fairies, performing alongside fairy-drones which dance high above the audience, turning Radio City into a wintry wonderland.

November 27-December 30, See website for schedule. Sundays at 11am are family show with pre show experience 1 hr before show

Charles Dickens’ classic holiday tale about the joy of community triumphing over selfishness, presented in this fresh musical adaptation by Sgouros & Bell. Follow Ebenezer Scrooge on his emotional journey, as he is visited by four forewarning ghosts.

Will Scrooge catch the holiday spirit and save himself in the process? Find out at this special holiday show with a story so warm it will melt the cold heart of even the grumpiest Scrooge!

The holiday season kicks off with what has become an annual tradition for singers all across New York City: the annual sing-in of Handel’s Messiah in Harlem’s Union Theological Seminary. The 40+ member The Dessoff Choirs will be joined by audience members of all ages and singing capabilities.

Pay as you wish

This holiday season, Electric Root hosts a celebration of community and love headlined by Michael Mwenso and his band the Shakes for a rocking, soul-satisfying selection of multi-denominational holiday classics.

The cast, wearing costumes by Mizrahi, performs choreography by John Heginbotham, bringing the 30-minute story to life for the young and young at heart.

The String Queens: A Holiday Celebration!

Élise Sharp (cello), Kendall Isadore (violin), and Dawn Johnson (viola) are The String Queens, a dynamically versatile trio of women whose skills as educators, orchestrators and performers of beguiling renditions of pop, jazz, and gospel have earned them performances on the world’s greatest stages.

At this all-ages winter holiday concert, the trio presents music from RISE alongside festive family favorites from their EP, Our Favorite Things.

What Makes It Great? Benjamin Britten’s ‘A Ceremony of Carols’

Your favorite songs and carols are performed by the Principal Quintet of the Gramercy Brass Orchestra. Enjoy the glorious sounds of holiday brass amidst the seasonal finery of Gramercy Park.

A Charlie Brown Christmas Live is a fresh take on the timeless classic that gives the audience a completely new way of experiencing the storyline as portrayed by real actors who maintain the integrity and spirit of each Peanuts character.

This award-winning story by Charles M. Schulz has been a longstanding tradition, warming the hearts of millions of fans since it first aired on television over 50 years ago.

Now, the live on-stage adaptation of the classic animated special brings all your favorite characters to life – all set to the unforgettable sounds of the Vince Guaraldi musical score. A Charlie Brown Christmas Live encompasses each of your favorite scenes from the original animated show.

It even expands the storyline into greater detail with more fun, more music, more finding the true Christmas spirit.

This Peanuts Experience also includes an intermission and, after the final bow, the show crescendos into a celebration of song as the audience is invited to join the Peanuts gang in singing Christmas favorites.

So, join Charlie Brown, Snoopy, Lucy, Linus and the rest of the Peanuts gang in their journey to uncover the true meaning of Christmas.

Les Ballets Trockadero de Monte Carlo, captivating audiences since 1974, returns to The Joyce for another uproarious holiday program in its signature comic style. The beloved troupe of male dancers takes the stage for nonstop skilled pointe work and hilarious parodying of classical ballet.

Splash along with Baby Shark and Pinkfong as they journey into the sea for the Holidays to sing and dance through some of your favorite songs in Baby Shark Live!: The Christmas Show!

This one-of-a-kind immersive experience will have fans of all ages dancing in the aisles as they join Baby Shark and friends for exciting adventures into the jungle and under the sea to explore shapes, colors, numbers and so much more!

Follow the story of a young bird named Max and his family, as they begin their journey south for the winter. When Max gets blown off course and ends up at the North Pole…..his adventure begins!

Dancing toy soldiers, caroling worms and performing poinsettias, light up the stage. Audiences of all ages will treasure this magical and captivating tale of family, friendship and hope set to timeless holiday hits, including Nat King Cole, Mariah Carey and Tchaikovsky.

Navidad: A Mexican-American Christmas focuses on a young person caught between two worlds—their family’s past in Mexico and their present life in New York City.

Through a dream, this youngster attempts to bring the two cultures together where Aztec-inspired dance is performed to Christmas carols, and Mariachi music melds with Tchaikovsky.

Kids’ music superstars Laurie Berkner and The Laurie Berkner Band invite families to share the spirit of the season with them at two festive holiday concerts.

The rest of the program will be chock full of traditional and original holiday songs, including “Jingle Bells,” “Santa’s Coming to My House Tonight,” “The Dreidel Song,” and more.

Fans can expect an array of Laurie’s greatest hits, too, such as “We Are The Dinosaurs,” “Victor Vito,” and “Pig On Her Head.” Kids should plan to bring their dancing shoes and a stuffed animal (for their heads), and Laurie hopes everyone will join in the holiday spirit and sing along!

Celebrate the holiday season with this festive show filled with song and dance, led by none other than the Clauses and their North Pole friends! Plenty of surprises and fun photo opportunities await you in this festive celebration!

Hudson Chorale, under the baton of Artistic Director David Baranowski, will perform with soloists including acclaimed tenor Nils Neubert, who will sing the lead role of Nicolas in the Britten.

Usher in the season of light and rebirth with these performances, featuring an ensemble including harp, tympani, violins, organ and piano.

“Jessica Lynn’s A Very Merry Country Christmas” has become a genuine New York holiday tradition, rivaling, and even eclipsing some of the biggest of holiday spectaculars.

A sell-out performance every year, the show is a full multi-media presentation featuring dancers, marching bands, choirs, special effects and even an annual visit from Santa himself.

With all of the traditional holiday songs you know and love, people of all ages become a part of the show and experience the magic of Christmas while raising money and collecting toys for Toys for Tots.

The Choir of Holy Trinity Orthodox Church will present its Annual Christmas Concert featuring choral music of the Orthodox Church and traditional carols from both East and West.

Damien Sneed’s Joy to the World: A Christmas Musical Journey

This performance features a cast of ten singers and musicians performing well-known holiday classics such as “Silent Night”, “This Christmas”, “O Come Emmanuel”, “Little Drummer Boy”, “The Christmas Song”, “Joy to the World”, excerpts from Handel’s “Messiah”, and many others!

Splash along with Baby Shark and Pinkfong as they journey into the sea for the Holidays to sing and dance through some of your favorite songs in Baby Shark Live!: The Christmas Show!

Ring in the Holidays with Laurie Berkner

Kids’ music superstar Laurie Berkner invites families to share the spirit of the season with her at a festive holiday concert.

The rest of the program will be chock full of traditional and original holiday songs, including “Jingle Bells,” “Santa’s Coming to My House Tonight,” “The Dreidel Song,” and more.

Fans can expect an array of Laurie’s greatest hits, too, such as “We Are The Dinosaurs,” “Victor Vito,” and “Pig On Her Head.” Kids should plan to bring their dancing shoes and a stuffed animal (for their heads), and Laurie hopes everyone will join in the holiday spirit and sing along!

The spirit of the season comes alive with the signature sound of the top-selling Christmas music artist in history! America’s favorite holiday celebration for four decades features the beloved Christmas music of Mannheim Steamroller along with dazzling multimedia effects that bring the magic of the holidays to life.

This joyous celebration of traditional and contemporary Irish and holiday music captivates audiences of all ages with the magic of the season. Featuring the impeccable five-part harmonies of the Celtic Angels, the show-stopping step dancing of the Celtic Knight Dancers and music by Trinity Band Ensemble.

Light up the holidays with this magical family show! Lightwire Theater’s A Very Electric Christmas is performed in complete darkness with electroluminescent costumes, puppets and scenery.

Kids and adults will both be dazzled by the glow-in-the-dark stagecraft, as the North Pole comes to life with soaring birds, dancing toy soldiers and a sparkling Christmas tree. This story of family, friendship and hope is set to timeless holiday hits, from classic (The Nutcracker) to contemporary (Mariah Carey).

This spectacular celebration will feature Rob Mathes, his all-star band, and a chorus of saints and friends. Be prepared for a high-energy evening of rock, jazz, and blues — original tunes and new spins on your favorite holiday classics — that will put you in the spirit of the season.

This critically acclaimed extravaganza is a Broadway musical and new cirque adventure wrapped into the ultimate holiday gift for the entire family.

Audiences of all ages will marvel at soaring acrobatics, gravity-defying feats and extravagant theatrical production numbers.