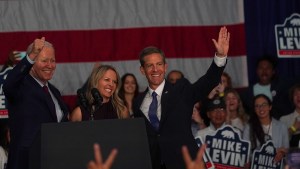 “With the vast majority of votes tabulated and the race called in our favor, it is with great honor and humility that I will return to serve California’s 49th District in the United States House of Representatives again,” Levin said in a statement.

“Serving this beautiful district and its talented residents has been a remarkable opportunity… I am particularly honored to have been able to work across the aisle to build bipartisan, common-sense coalitions to tackle many of these issues.”

“I also want to thank Brian Maryott,” Levin said. “A thriving democracy requires competition for citizens’ votes, and to those who voted for Mr. Maryott, I want to reassure you that my door is always open. I welcome opportunities to work together because the best legislation is always that with the broadest input.”

Meanwhile Republicans were projected to win a majority in the U.S. House of Representatives on Wednesday, setting the stage for two years of divided government as President Joe Biden‘s Democratic Party held control of the Senate.

The victory gives Republicans the power to rein in Biden’s agenda, as well as to launch potentially politically damaging probes of his administration and family, though it falls far short of the “red wave” the party had hoped for.

The final call came after more than a week of ballot counting, when Edison Research projected Republicans had won the 218 seats they needed to control the House Republican victory as California’s 27th Congressional district took the party over the line.

The party’s current House leader, Kevin McCarthy, may have a challenging road ahead as he will need his restive caucus to hold together on critical votes, including funding the government and military at a time when former President Donald Trump has launched another run for the White House.

The loss takes away some of Biden’s power in Washington but on Wednesday he congratulated McCarthy and said he would work across the aisle to deliver results.

“The American people want us to get things done for them,” Biden said in a statement.

House Speaker Nancy Pelosi said in a statement House Democrats “will continue to play a leading role in supporting President Biden’s agenda – with strong leverage over a scant Republican majority.”

Democrats have been buoyed by voters’ repudiation of a string of far-right Republican candidates, most of them allies of Trump, including Mehmet Oz and Doug Mastriano in Pennsylvania’s Senate and governor’s races respectively, and Blake Masters in Arizona’s Senate contest.

Even though the expected “red wave” of House Republicans never reached shore, conservatives are sticking to their agenda.

In retaliation for two impeachment efforts by Democrats against Trump, they are gearing up to investigate Biden administration officials and the president’s son Hunter’s past business dealings with China and other countries – and even Biden himself.

On the international front, Republicans could seek to tamp down U.S. military and economic aid to Ukraine as it battles Russian forces.

Where to eat Thanksgiving dinner in Chicago

I Tried 8 Pairs of Leggings—Here’s My Honest Opinion