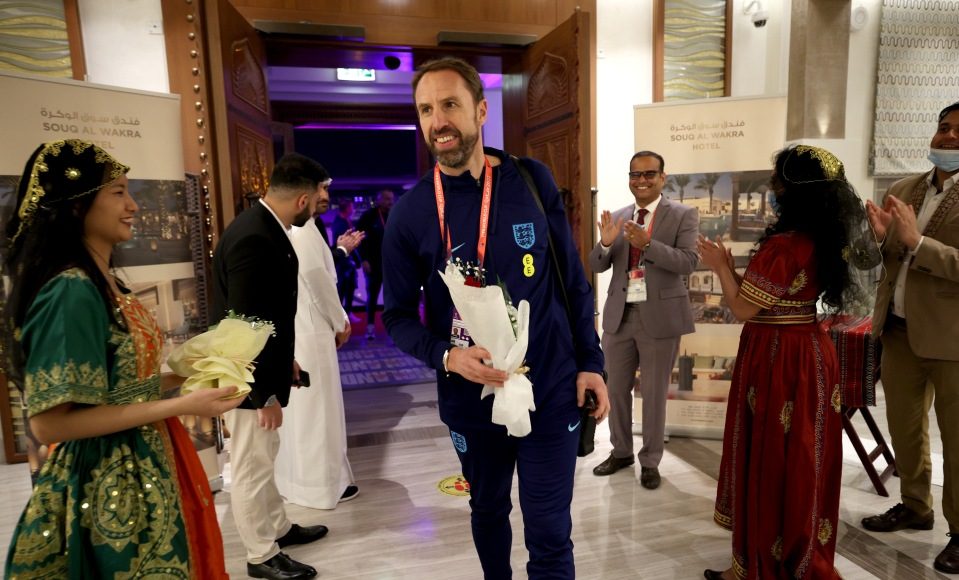 JACK GREALISH and James Maddison were all smiles as they were gifted roses upon arrival at England’s World Cup hotel.

Gareth Southgate’s side touched down in Qatar ready for redemption following heartbreak in last year’s Euros.

And the star-studded squad received a warm welcome as they arrived at the luxurious Souq Al-Wakra hotel.

Maddison, Grealish and Mason Mount were all seen beaming as they were handed flowers when arriving.

But the time for pleasantries will soon be over as Southgate prepares to pick his starting 11 for next Monday’s opener.

READ MORE ON THE WORLD CUP

England kick off their campaign against Iran and skipper Harry Kane is ready to get down to business.

He said: “The main aim is to bring the trophy home and win the whole tournament.

“Of course that’s the dream and what we’re aiming to do. We want to make our fans proud and happy.”

Kane added: “Excitement’s building among everyone.

“We’re happy to be here and looking forward to being out on the training pitch.


Ex-Prem star to go on trial after 'scamming investors in £2.5m plot'

RIGHT BACK AT YA

“It’s going to be a tough tournament, we have to prepare for that but really excited to get going.”

Manager Southgate said: “For every player and every manager it’s the pinnacle of world football so we’re really looking forward to testing ourselves on that stage.”

Gareth Southgate is greeted after arriving in Qatar[/caption]

APSU’s The New Gallery exhibits “The Sky is [Still] Mine” by...

This Denim Trend Is Crushing Everything Else—Here Are 5 Shoes to...