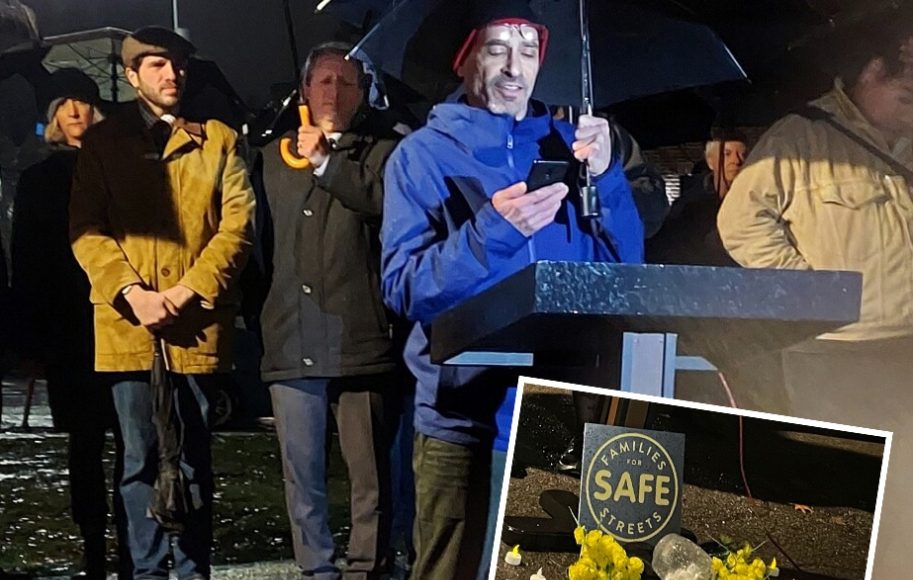 The big story of the day will be today’s 9 a.m. “die-in” at the intersection of Second Avenue and Ninth Street in Gowanus, the spot where Sarah Schick was killed by a truck driver last week.

Little remains known about the final moments leading up to the crash, but everyone knows that the Department of Transportation has had many years (and many false starts) in making that stretch of Ninth Street safe for cyclists. You’ll hear plenty of complaints from cyclists about near misses that could have become tragedies — and more calls for the city to do something.

Friday’s action comes just hours after grieving relatives and friends of Norman Fruchter gathered in Bay Ridge’s Owls Head Park on Thursday night to mourn the loss of the education reform giant who was killed earlier this month by a reckless driver steps from his home. Fructer’s wife, Rachel, was herself killed by a reckless driver in Prospect Park 25 years ago.

Neither driver — the trucker who killed Schick nor the reversing hellcat who ran down Fruchter — has been charged in the deaths, but legal accountability is only demand of city cyclists and pedestrians. The other is better design to slow down these reckless drivers who last year killed 17 cyclists and more than 125 pedestrians, according to city stats.

It’s worth repeating the litany of road hazards: Last year in New York City, there were 103,486 reported crashes, or 283 on the average day. Those crashes injured 49,408 of our fellow New Yorkers and visitors, including 5,014 cyclists and 8,935 pedestrians. Those numbers are, as the DOT pointed out earlier this month, getting better. But they are still horrific.

And, speaking of Ninth Street, there was a crash on a very busy stretch of the roadway between Fifth and Sixth avenues featuring a Virginia-plated driver who messed up big time. We pointed out that his plates are probably part of a “Where Do My Neighbors Live”-style insurance scam, given how many local tickets this scofflaw has racked up:

Especially when driven like this driver chooses to drive them: https://t.co/KESUMN3XqQ https://t.co/qbv72DNCDa

We appeal to @lawler4ny to study the numbers: More constituents take transit to the central business district than drive there. So starving transit in favor of drivers is bad politics AND bad policy (link to the local Assembly district with similar demo): https://t.co/IZJTUpFZKI https://t.co/chR1e6Zewa

What happens when a pup named POTATO & a reporter from @THECITYNY get stuck on an elevator at a Brooklyn subway station that recently closed for six months… so its elevators could be replaced.
? ? ?
I write this story, that’s what. https://t.co/4kvpjv0wVy

Four strangers drive to Cleveland from Tampa after their canceled flight