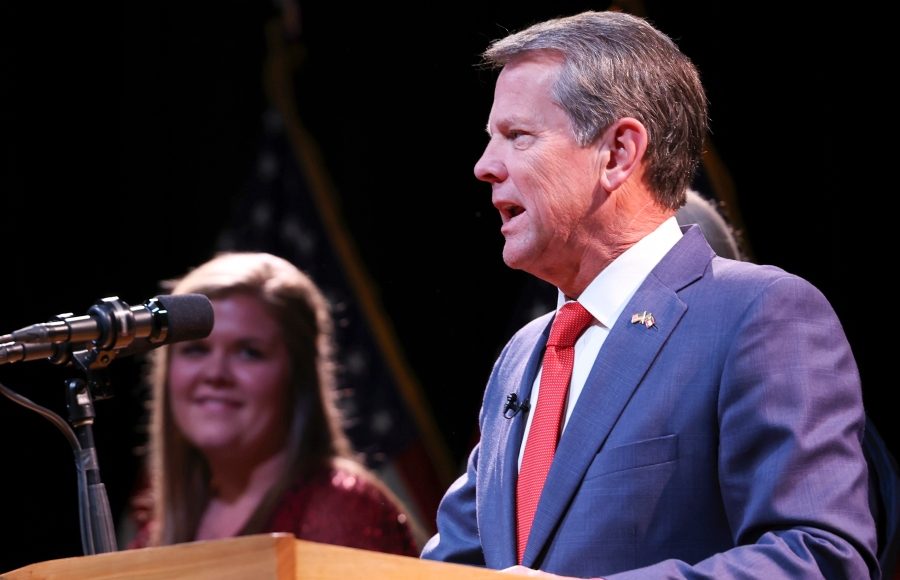 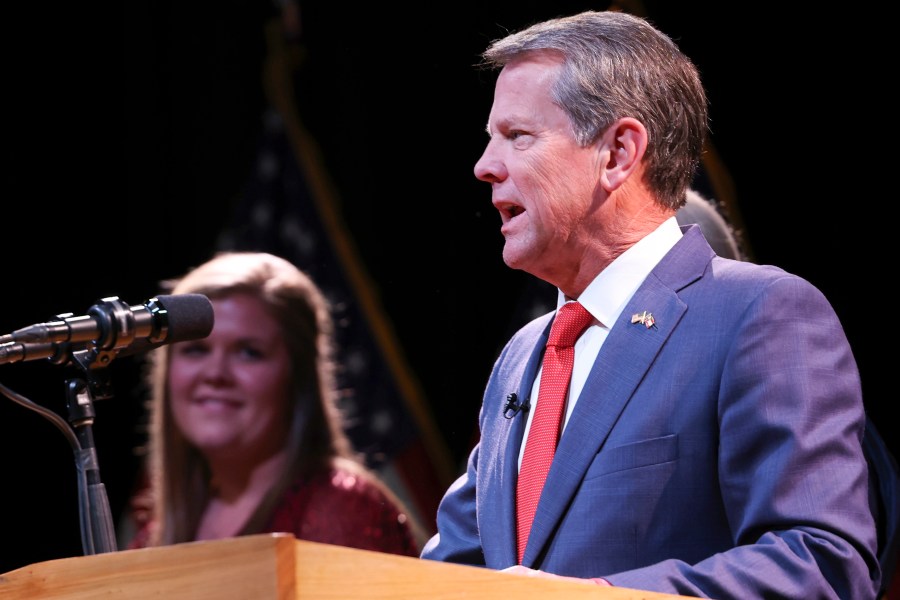 Then the Republican incumbent wore down Democratic superstar Stacey Abrams for a second time, culminating in a decisive Tuesday election victory.

Now, as he celebrates his reelection, Kemp is arguing that his no-drama conservative approach is the way forward for the GOP.

“This election proves that when Republicans stay focused on real world solutions that put hard-working people first, we can win now, but also in the future, y’all.” Kemp told supporters as he declared victory Tuesday.

Kemp largely played the foil to Abrams in 2018, making attention-grabbing ads where he pointed a gun at a teen and promised to use his truck to round up immigrants living in the country illegally to position himself as a conservative in a Republican primary.

As a public speaker, he drawls out short speeches punctuated with University of Georgia football catchphrases.

One of those slogans — “Keep choppin'” — dates to the Bulldogs’ 2018 team when Kemp first ran for governor. And it summarizes Kemp’s dogged approach.

Kemp focuses on what he can control. He never rose to the bait of attacking Trump in public even when Trump was savaging him every day for refusing to overturn the 2020 elections. He may not soar to rhetorical heights, but he rarely makes a stumble that he’s forced to defend. And he used his incumbency to maximize his advantage: The former secretary of state reaped benefits from voters concluding he has demonstrated independence and steadiness.

Seung Lee, a software tester, is one example of a voter who could have gone Democratic — he voted for incumbent U.S. Sen. Raphael Warnock over Republican challenger Herschel Walker. But the resident of the Atlanta suburb of Decatur chose Kemp, citing a level of comfort and satisfaction with the incumbent.

“We’re already familiar with how things are when Kemp is in office and I don’t really like Abrams,” Lee said.

Voters like that helped Kemp win more than 53% of ballots, beating Abrams by 300,000 votes out of 4 million. That may not sound like a landslide in other states where Democrats or Republicans breeze to victory. But Kemp’s win was more than five times as big as in 2018. And it may be close to the ceiling for a GOP candidate in narrowly divided Georgia, where partisans tend to be dug in, said Alec Poitevint, a Kemp supporter and former state Republican Party chairman.

“Of the votes that were available — that had an opportunity to vote for Brian Kemp — he got nearly all of them,” Poitevint said.

It’s quite a turnaround from early 2021, when county Republican parties passed resolutions censuring Kemp for being insufficiently supportive of Trump. Kemp was booed by some at the state Republican convention that year. But that opprobrium boosted Kemp’s image among moderate Republicans and independents who didn’t like Trump and who detested the former president’s attempts to overturn the 2020 election.

“He proved that he was not only a traditional conservative, but he was also his own man,” said Eric Tanenblatt, a lobbyist who was chief of staff to Republican Gov. Sonny Perdue and later national finance co-chair for Republican Mitt Romney’s 2012 presidential campaign. “He swore allegiance to the Constitution and not to a single political figure, and I think people respected that. He stood up for the rule of law when it counted most.”

The governor’s fortunes began to revive among Republican partisans when he signed a new voting law that came under sharp Democratic attack. After the public reaction led Major League Baseball to pull the All-Star Game from the Atlanta Braves’ stadium, Kemp went on the offensive, defending the law and its Republican supporters. The governor also won a gamble when he removed restrictions from Georgia businesses during the COVID-19 pandemic, despite a hail of criticism.

“He kept the state afloat during the COVID craziness,” said Herb McCaulla, the owner of a memorabilia business who voted for Kemp. “We’re not hurting like some other states that shut things down.”

Kemp’s contention that this move supercharged Georgia’s state economy was the cornerstone of a reelection campaign that mostly highlighted his record, making only a handful of new pledges for a second term.

“When you’re an incumbent, the election is a referendum on you,” Tanenblatt said,

Kemp also effectively used his power. He signed a raft of conservative bills that helped finish off a Trump-endorsed challenge from former Sen. David Perdue. Kemp embarrassed Perdue, winning by a wide margin. At the same time, Kemp was doling out federal COVID-19 relief money and surplus state funds — spending nearly $1 billion to suspend the state gas tax since March, another $1 billion to give income tax rebates, and more than $800 million giving $350 payments to recipients of food stamps, Medicaid and other public benefits.

Kemp’s spending, including pay raises for teachers and state employees, left Democrats fuming, because Kemp spoke out against the Democratic-backed bill in Congress that sent much of the money to Georgia.

“It’s always tough to go against an incumbent,” said Democratic state Rep. Al Williams of Midway, who is close to Abrams. “It’s doubly tough when the incumbent has control of an endless supply of federal money.”

Kemp said this was his response to inflation, what he sometimes called the “Biden-Abrams” agenda, linking Abrams to the unpopularity of President Joe Biden. That was a big part of the “headwinds” of which Abrams campaign manager Lauren Groh-Wargo repeatedly warned.

Nearly half of Georgia voters said the economy is the most pressing issue facing the country, according to AP VoteCast, an expansive survey of 3,200 voters in the state. Roughly a third of Georgians said their family is falling behind financially. A majority of those voters cast ballots for Kemp and Walker.

Rising costs were named a top concern among the state’s voters, with roughly 9 in 10 saying the inflated price of groceries, gas and other goods is an important factor in how they cast ballots.

Even though Abrams again outraised Kemp, with her total nearing $100 million compared with about $70 million for Kemp, she was unable to overcome the advantages Kemp built up. Kemp’s favorability ratings consistently topped those of Abrams in polls, reflecting in part years of attacks on Abrams by Republicans. Kemp fed that dislike, calling her “celebrity Stacey” and highlighting her national ambitions. The biggest applause line in his stump speech was delivered to whoops on Tuesday.

“Stacey Abrams is not going to be our governor or your next president,” Kemp said.