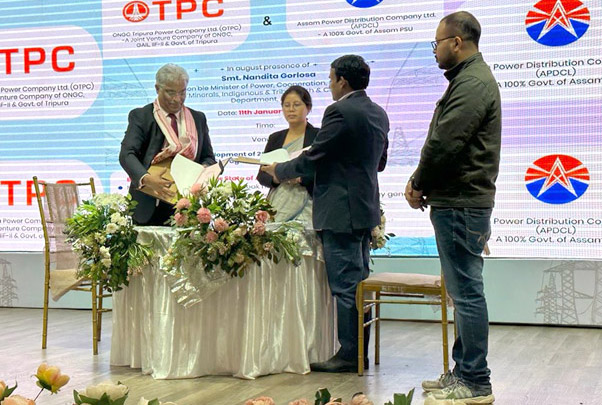 A Memorandum of Understanding (MoU) has been signed by a subsidiary of India’s state-owned Oil & Natural Gas Corporation (ONGC) for a large-scale battery storage project in Assam.

ONGC Tripura Power Company, founded in Tripura to leverage ONGC gas reserves in the northeastern state, has signed the MoU with Assam Power Distribution Company Limited (APDCL), which is the state of Assam’s power distribution system operating company, or Discom.

Signed on 11 January, the pair will create a joint venture (JV) to develop a battery energy storage system (BESS) project with up to 250MW rated power output and 500MWh capacity, ONGC said in an announcement.

The project would require around INR20 billion (US$245 million) investment in Assam.

Nandita Gorlosa, Assam’s Minister for Power, Mines & Minerals attended the MoU’s signing, later tweeting about its expected benefits and making a statement that the project will contribute to raising Assam’s status in India’s renewable energy transition.

India as a whole is targeting the installation of 450GW of new non-hydro renewable energy capacity by 2030, having already passed the 150GW mark. Energy storage has widely become seen as key to enabling that, whether in terms of large-scale pumped hydro energy storage (PHES), or lithium-ion BESS.

ONGC is owned by the government of India’s Ministry of Petroleum and Natural Gas and is claimed to be the country’s largest crude oil and natural gas company. It set up its Tripura subsidiary with the government of that state as a minority shareholder and owns and operates a 726.6MW combined cycle gas turbine (CCGT) plant in the state, with further involvement from parties including the US’ Global Infrastructure Partners investment group.

Regular readers of Energy-Storage.news will note from our coverage that another major Indian state-owned energy sector group, National Thermal Power Corporation (NTPC), has been tendering for large capacities of energy storage. It recently awarded contracts to a large-scale PHES project in a technology-agnostic solicitation, while it also holds technology-specific reverse auctions for BESS.

Energy-Storage.news’ publisher Solar Media will host the 1st Energy Storage Summit Asia, 11-12 July 2023 in Singapore. The event will help give clarity on this nascent, yet quickly growing market, bringing together a community of credible independent generators, policymakers, banks, funds, off-takers and technology providers. For more information, go to the website.

Rhian Brewster never doubted the goals would flow again – while...