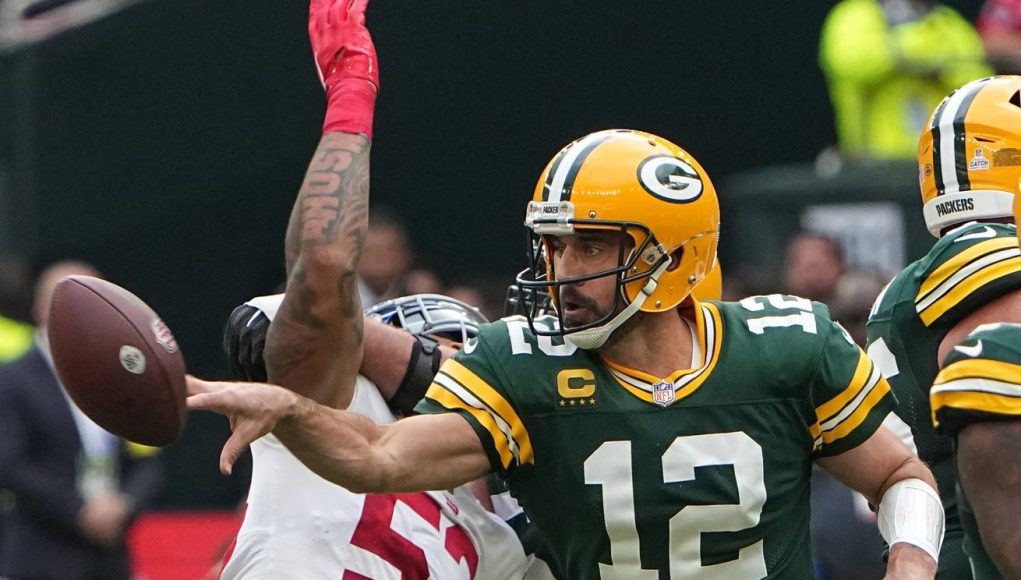 How do the Jets beat the Packers?

The Jets face a future Hall of Fame player in Aaron Rodgers likely for the last time Sunday. I’m sure this is a day that Zach Wilson will remember the rest of his life. The once in a lifetime chance to match abilities with a sure fire first ballot Hall of Fame player is something any young QB would relish.

When the NFL schedule came out Wilson probably circled this date immediately. He will look to be at his best in front of NFL royalty. He has probably focused all week on game tape. He doesn’t have to outplay Rodgers (although that would be sweet) but just play well enough to make Rodgers take notice of his talent. That in and of itself would be a resounding affirmation of him as a true NFL QB. It would just be a bonus he does it in Rodgers’ home stadium of Lambeau Field.

How do the Jets (not Zach Wilson) beat the Packers on their home turf?

For the Jets to win on the road they have to look at the Packers of today, not the Packers of a few or many years years ago. Look at the roster. You won’t find Donald Driver, Davonte Adams, Don Hudson, Sterling Sharpe, or Jordy Nelson. The 2022 Packers leading receiver is Randall Cobb who has 17 receptions for 249 yards with zero TDs. Cobb played 8 seasons with the Packers before he left to play with the Cowboys then the Texans before coming back to the Packers last year. Cobb is a former college QB who morphed into a WR but is now 32 years old without the speed and quickness he had a few years ago. He gets by on intelligence and experience, but he is no longer a gamebreaker.

Aaron Rodgers has been less than pleased by the talent he has to work with. His rookie Christian Watson missed most of the offseason and minicamps with a knee injury. He is now out against the Jets with a hamstring injury that could land him on IR.

That leaves rookie Romeo Doubs (great name), Allen Lazard, and Sammy Watkins as his wide outs along with Cobb out of the slot. Those three (minus Cobb) have a combined 44 receptions for 533 yards and 5 TDs in 5 games. Watkins is also out for this game as he was put on IR.

The Packers do have two very good running backs in Aaron Jones and AJ Dillion who have a combined 635 yards rushing on 124 attempts, which is over 5 yards a carry. They also have 23 receptions for 167 yards and a TD in 5 games. The Packers have always have had one of the best screen games in the NFL.

Defensively the Packers are tough allowing only 278 yards of offense a game. The Packers offense helps their defense by putting together long drives that keep the opposing offense off the field. Yet for a team that prides itself on offense, they have scored a single point more than their opponents through 5 games. Again this is not the great downfield passing attack that you have seen for the last decade and a half. This offense is more methodical. In fact the Jets offense has far more big play ability. The only difference is a QB who probably ranks in the top 10 of all the QBs in the history of the NFL; that of course is a huge bonus.

Still if you look at passing stats, Rodgers in 2022 ranks 17th in passing yards behind the likes of Trevor Lawrence, Geno Smith and even Carson Wentz. Rodgers averages just over 230 passing yards a game which is the lowest per game average of his career since he became the starter back in 2008. Time has also slowed Rodgers as he is not as nimble in the pocket as he once was. He is no statue like Joe Flacco, but his movement skills have been diminished in recent years. Rodgers was always able to keep drives alive by a timely run from the pocket for a first down. He was never a talent like Lamar Jackson, but he always had escape ability from the pocket. Not so much any more.

Back six or seven years ago Rodgers would run at least three or four times a game for an average of five or six yards a carry. Two years ago that average dropped to 3.9 and then last year to 3.1. This year Rodgers (in 5 games) has run only 8 times for a total of 9 yards with a long of 7 yards. He is averaging only 1.1 yards a carry and appears reluctant to do so.

So how do the Jets defense stop the Packers offense?

The Jets would be wise to play some zone coverage (not soft coverage) but also bring a safety down into the box to help against the run. The Packers are a team that now uses the run to set up the pass which is a switch from a few years ago. The Packers have been dominant in some games on the ground. The average 135 rushing yards a game. They annihilated the Patriots in Week 4 with 199 yards on the ground. They also destroyed a good Bears defense in a win with 203 yards rushing. The only win the Packers had without a great rushing attack was a 67 yard effort against the Buccaneers. The Packers only scored 14 points in the win (14-12).

If the Jets can stop the run they can make the Packers one dimensional. The Packers lack speed at receiver with their two fastest receivers (Christian Watkins and Sammy Watkins) not playing. Rookie Romeo Doubs (again super cool name) has 4.47/40 speed, but he isn’t going to run away from Sauce Gardner or DJ Reed. Allen Lazard is a big receiver but not very fast 4.55/40.

The most important thing the Jets need to do is rush the passer without committing to a heavy blitz concept. The Jets need their front four to win against a suspect Packers offensive line. The Packers best lineman is David Bakhtiari who has played of 4 games in the last 2 years. Last week was the first time in two years he played the majority of the snaps in a game. Bakhtiari is coming back from a devastating knee injury. He is not the same player he was a few years ago. On the opposite side tackle Elgton Jenkins has struggled mightily at right tackle (after playing the left side last year). He ranks as the 53rd best pass blocker (on PFF) out of 73 players. On the inside you have three unde inspiring players with Josh Myers at center and Royce Newman and Jon Runyan at the guards. Newman especially can be bull rushed. He was a ZBS type offensive tackle in college. He isn’t very stout against power.

If the Jets are successful on defense it will be due to Carl Lawson, Bryce Huff, JFM and Michael Clemons putting pressure on Rodgers. If you give Rodgers time he will eat you alive quickly, and decisive pressure will be needed for the Jets to win.

How can the Jets win this game on offense?

The Packers are a ball control type of team who possess the ball for 3 1⁄2 minutes a game longer than their opponents. They also run about 10 more offensive plays than their opponents as well. The best way to beat them is to beat them at their own game. Control the ball keeping Aaron Rodgers on his sideline. Rodgers will get frustrated when things don’t go his way so rushing him when he has the ball as well as keeping him sitting on the bench will do the trick.

The Jets’ hero in this game (if they win) will be Breece Hall. The Packers are vulnerable against the run (giving up 4.8 yards a play) so a big 220 lbs RB can have success against their 3 man defensive front. The Jets can use Michael Carter in passing situations to work against the Packers LBs De’Vondre Campbell and Quay Walker who are huge (6’ 3” 232 and 6’ 4” 241 respectively) but lack agility and quickness. Carter would be a mismatch in the open field as a target for Zach Wilson.

Zack Wilson doesn’t have to play hero ball in this game. He just needs to be accurate and mobile against a above average pass rush with Rashan Gary (5 sacks) and Preston Smith (3 1/2 sacks) leading the way. The Jets can use the snag passing concept like they did last week with success. The snag passing concept isolates the flat defender against the TE (over the middle) and a RB (Carter) in the flat for an easy completion. They can also use Hall as a decoy in zone read plays that will give Garrett Wilson and Elijah Moore some open looks in intermediate routes.

Zach was very accurate last week on some whip routes which gave the Jets first downs. The Jets could also try a couple of deep passes to keep the defense from moving up into the short zones thereby squeezing the offense. As long as Zach plays within himself, doesn’t make the big mistake, and makes enough plays in the passing game the Jets have a great chance for victory.

Even though the Jets are playing on the road they should also take umbrage to the fact they are 7 1⁄2 point underdogs to the Packers. The Jets are an emerging team while the Packers have a limited time before Rodgers retires. Once that happens they will be fighting for mere mediocrity. There is no doubt the Jets can win this game; they have two road wins already and were underdogs in both contests.

The Jets have to build on past success then take a “Us against the world” mantra. If the Jets can win this game they would go to 4-2 and make the national media look at them in a different light. If the Jets want respect (and they do), they have to earn it. No place is better to do that than on the hallowed grounds of Lambeau Field.

Also an interesting fact is the Chicago Bears have always led the NFL in total wins. Of course they have played more games than any other team. Yet right now the Bears and Packers are tied with the most NFL wins all time 785 wins. If the Jets win they can keep the Packers from becoming the winningest franchise in NFL history if even for a week.

So what is your pick?

Who wins between the Jets and the Packers and what’s the score?

The 3-Piece Outfit French Girls Are Loving This Season