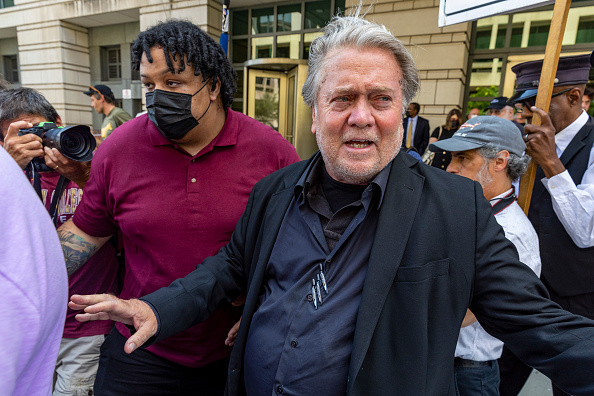 NewsNation) — On the eve of Steve Bannon’s expected surrender to New York police, his lawyer David Schoen told NewsNation’s Ashleigh Banfield that the charges against the former Trump strategist are a hit job to “shutdown Trump through (Bannon).”

Schoen also said he’s “well prepared” if Bannon’s presidential pardon is discussed in court. He’s confident that the federal pardon won’t be an issue in the case.

“There’s been no finding of guilt nor any admission of guilt with the pardon,” Schoen said during an exclusive “Banfield” interview Wednesday. “Mr. Bannon is presumed innocent at all times, unless and until he’s ever proven guilty.”

Bannon released a statement Tuesday night saying that the charges against him are “nothing more than a partisan political weaponization of the criminal justice system.”

“They are coming after all of us, not only President Trump and myself. I am never going to stop fighting. In fact, I have not yet begun to fight. They will have to kill me first,” Bannon added., which Schoen perceives as a hit job to “shutdown Trump.”

Details of the case currently remain unclear, and Schoen said he’s never encountered a “situation in which there was a sealed indictment.”

“We know that there’s more defendants than just Mr. Bannon, and we don’t know how many. We don’t know anything about the charges. We expect that tomorrow, a judge will order the indictment unsealed. And we’ll know a lot more,” Schoen said.

Bannon was convicted of contempt of Congress last month for resisting a subpoena from the Jan. 6 committee. The 68-year-old was found guilty of two misdemeanor counts of refusing to provide testimony or documents to the House of Representatives select committee.

The Washington Post reported Wednesday that Bannon is expected to face a new criminal indictment in New York and surrender to state prosecutors Thursday.

Welcome to Sweater Season—5 Trends That Are Out and 5 That...