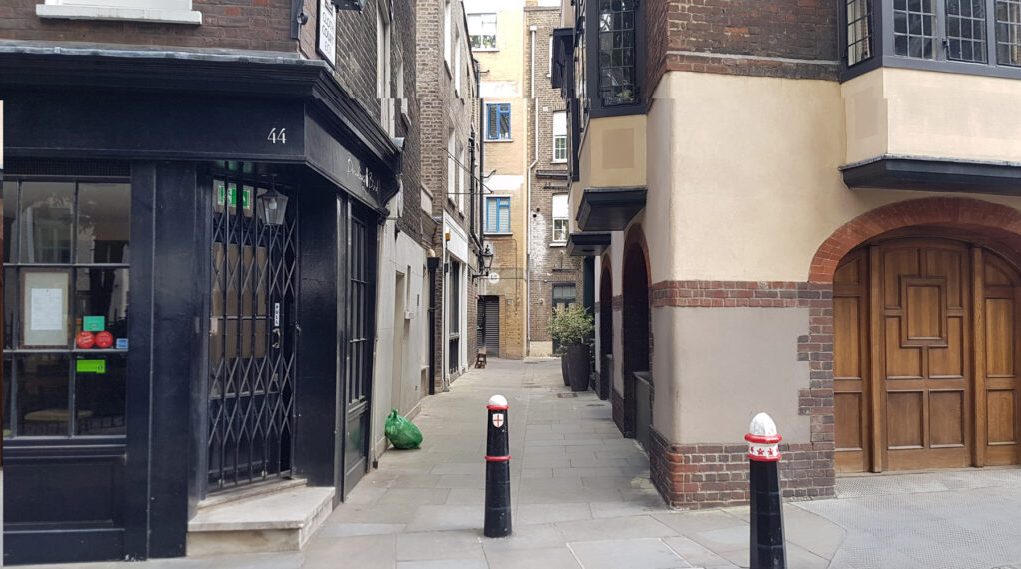 This is an ancient narrow alley that slips around the backs of buildings in Smithfield, and was for many years, a townhouse for Sir John Betjeman. 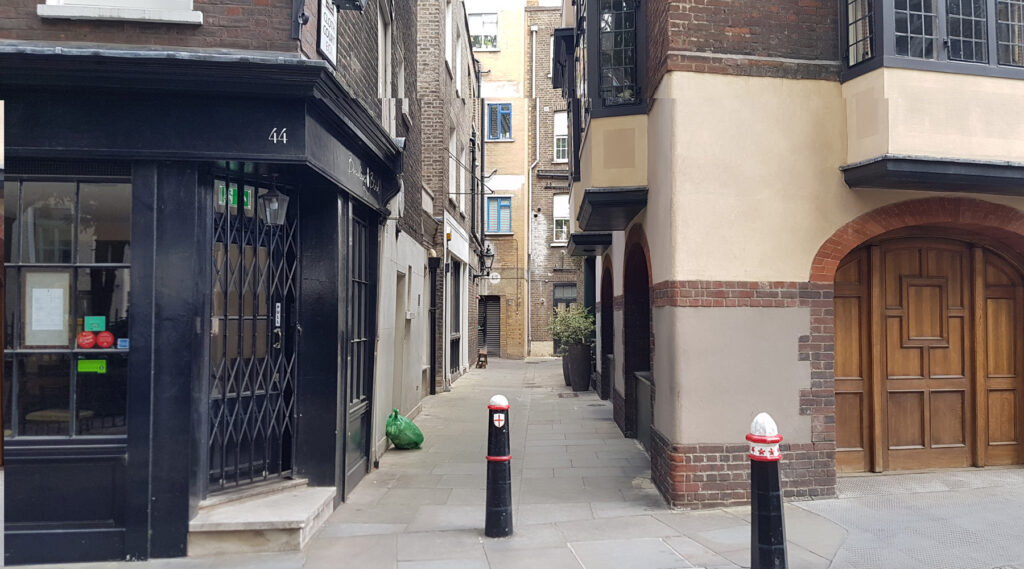 The area was once home to an Augustinian priory, which was set up during the time of King Henry I, and which generated a sizeable chunk of its annual income from a large fair that was held in the Smithfield next door. After the dissolution of the monasteries, by King Henry VIII, the land was sold off and developed into a cluster of narrow streets and back alleys, of which this is one.

The name of the alley is new though, as it used to be called New Court, but was renamed Cloth Court at some point between 1900 and 1940.

The crowded houses were overcrowded slums in the early 20th-century and in 1914, it was decided to clear the area to improve sanitation. Fortunately, some of the buildings were saved, including the building on the corner, which is claimed to be “the last Jacobean house in London”, even if it looks externally to be a pastiche of an old building.

That contrasting appearance is thanks to the modern style of the ground floor, but look up and that seemingly faux-Tudor appearance is actual Tudor, legit indeed. Nearly demolished, it was saved and converted into offices in 1930. The building was restored in the 1990s to something closer to its earlier appearance, replacing Georgian-era windows with more suitable lead glass windows. There’s a small plaque on the side noting that the restoration won a City Heritage Award in 2000.

A bit further around the corner of the alley is 43 Cloth Court, with a blue plaque on the side which is where the poet Sir John Betjeman rented a flat between 1954-1973. He rented the flat here in addition to his home as it is said to be where he spent time with Lady Elizabeth Cavendish, with whom he had a long romantic affair while still married.

The blue plaque doesn’t mention that.

It didn’t come out in my sunny photos on the day, but look at the window next to the blue plaque, as there’s a painting behind the glass. Much faded and difficult to see, but it’s worth trying to see if you can. It’s by Brian Thomas, and was commissioned by the architects to give them something interesting to look at from their office window opposite.

He chose the flat though because he was in contact with the architects, Paul Paget and John Seely who were working on saving and restoring Cloth Court, and it’s said that it was from here that Betjeman started many of his campaigns to save buildings from demolition, including St Pancras station hotel.

You can now stay in the flats above though, as the building is owned by the Landmark Trust and is rented out for short stays. Betjeman’s flat still looks much as it did when he lived there.

The windows to the ground floor restaurant are new, but the facia (apart from some of the brackets which had to be replaced) is original, dating from around 1800.

Heading along the alley, once you get past the initial buildings, it becomes very much more of a utility space, with high solid walls and infilled former warehouse delivery spaces close to the ground. A few doors give back route access for the shops that face onto the main shops of Long Lane, but apart from the use of cleaned up yellow stock brick is otherwise unadorned. 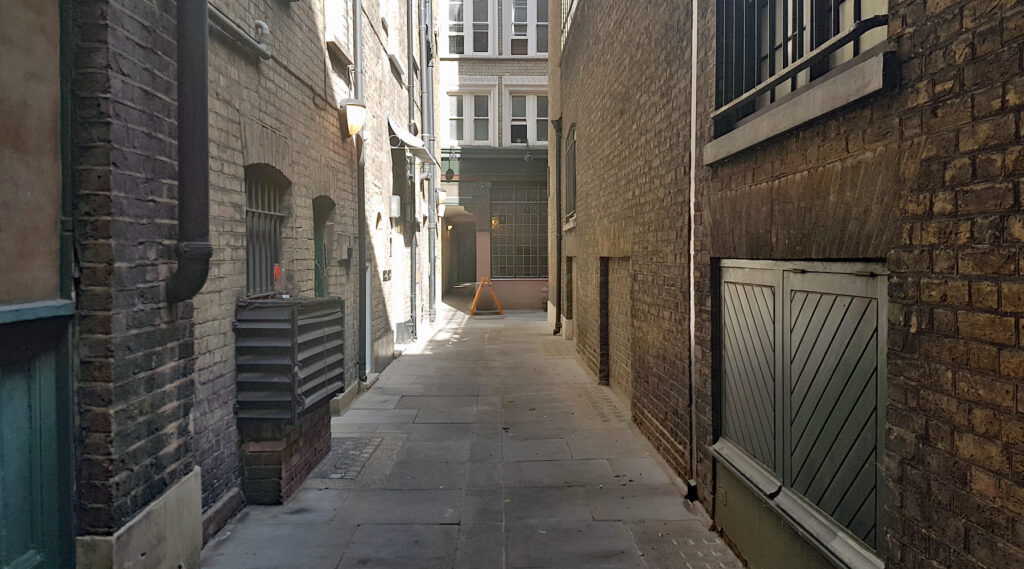 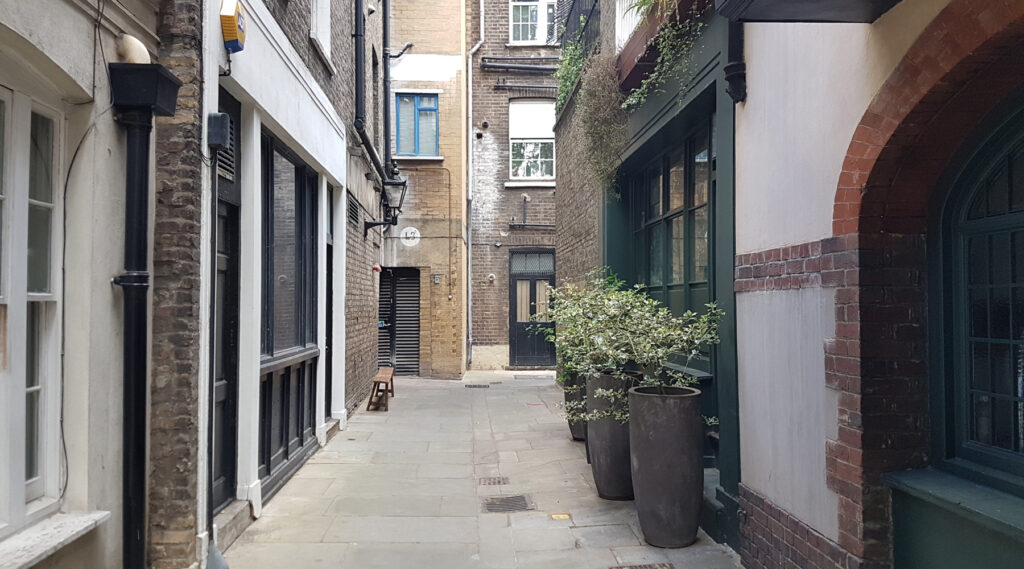 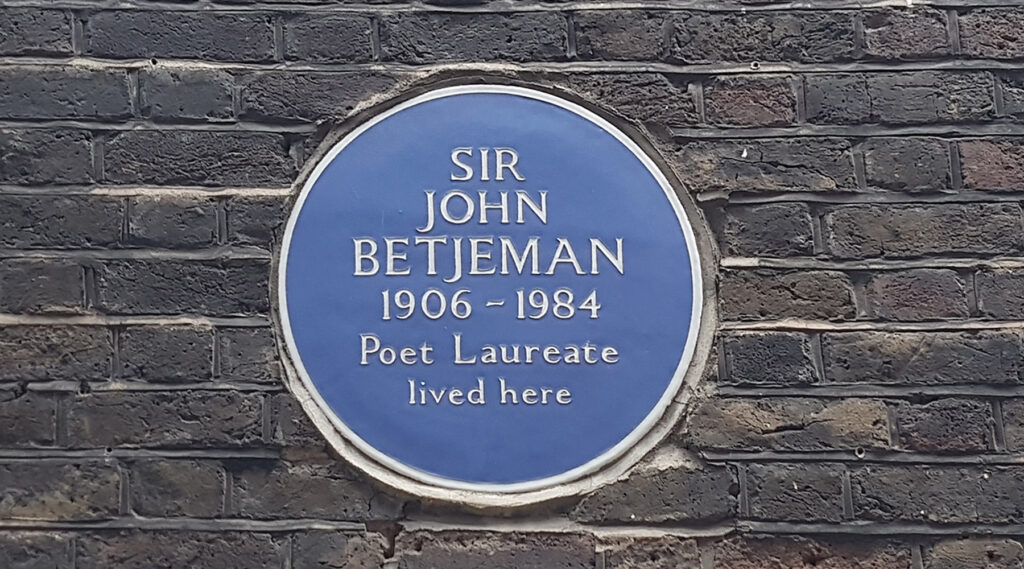 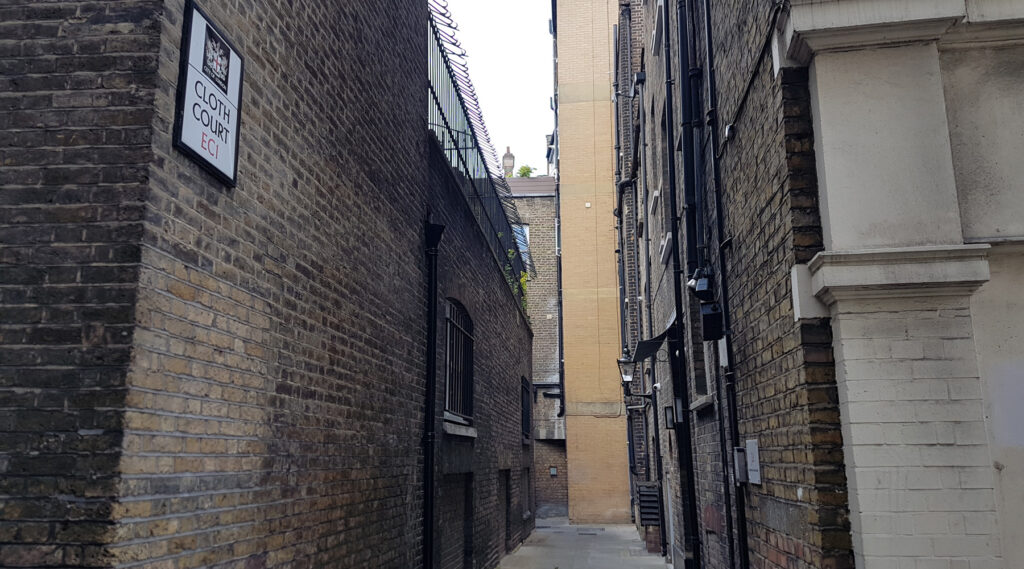 White teacher in Texas fired after telling students his race is...