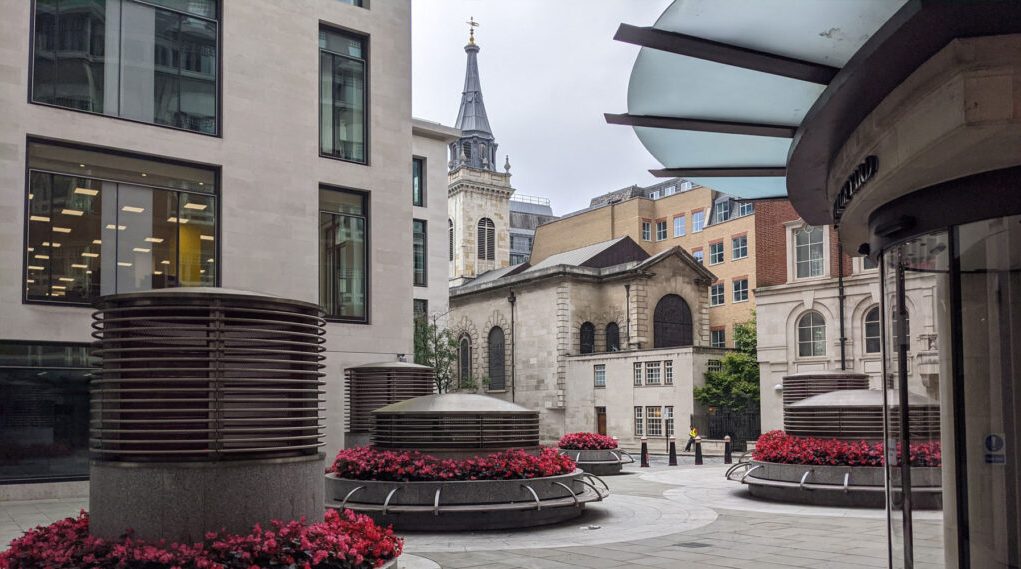 This is a former alley that’s now a large courtyard space surrounded by City offices and a Wren-built church, and sits in the centre of a cluster of smaller surviving alleys. 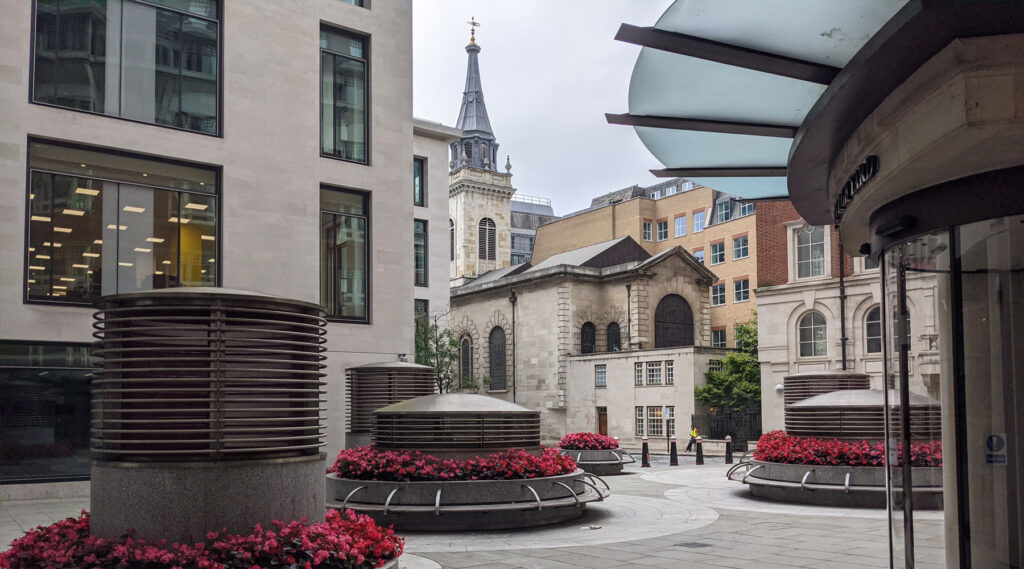 George Yard is named after the George Inn that stood on the site in Tudor times as a large coaching inn for travellers. By the 1670s the yard had become more of a narrow alley that lead off Lombard Street and had already gained the name of George Yard, and was little changed right up to recent times. 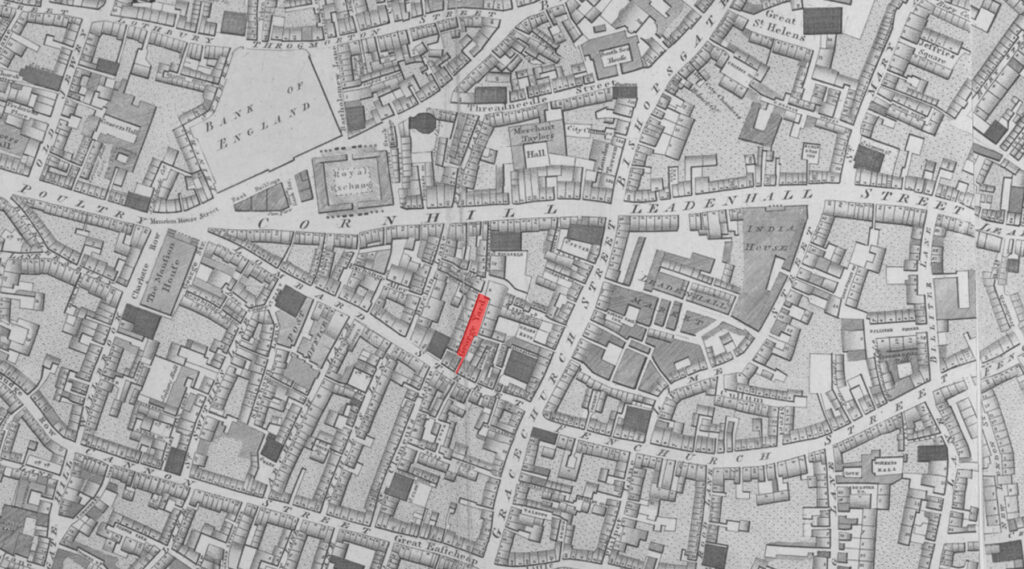 Although now it’s mostly surrounded by modern offices, on one corner is St Edmund the King Church, a post Great Fire rebuilt of a medieval church. It used to be known as St Edmund towards Garcherche, referring to a local market for hay, herbs and vegetables.

Opposite the church used to be a 16th-century wine merchant known as the George and Vulture after the owner tethered a live vulture to the pole that would usually hold a hanging sign. He had a living sign.

It is mentioned at least 20 times by Charles Dickens in The Pickwick Papers as he frequently drank there himself. The George and Vulture has been the headquarters of the City Pickwick Club since its foundation. When it was threatened with demolition, Cedric Charles Dickens, the author’s great-grandson, campaigned to save it. Since 1950 it has been the home of his Dickens Pickwick Club and, in the same year, it became the venue for the Christmas Day Dickens family gathering, in the Dickens Room.

The yard survived pretty much unchanged until the mid 20th-century when the clusters of surviving buildings were merged into larger office developments. The most notable is 20 Gracechurch Steet, one of the City’s more notable postmodern office blocks with its very distinctive curved roof profile. It was built in the 1990s for Barclays Bank, and took over the entire corner plot of the area, swallowing up dozens of smaller buildings.

Today the yard is split into two spaces, a large cobbled (setts) road space used for deliveries to the offices around it, and a paved area dominated by a cluster of circular almost sculptural ventilation shafts for the basement and seating around them.

The office block 2 George Yard which today looks fairly conventional used to have a very different ground floor, as it was an “undercroft” with the yard extending under the building to provide a covered entrance for Barclays Bank’s directors to use. That’s now been filled in with a normal office entrance.

The site 2 George Yard is itself interesting as back in the 1780s, it was a bookshop and printers, and was where the Society for Effecting the Abolition of the Slave Trade was founded, campaigning to educate the public about the evils of the slave trade. It was successful and was able to abolish itself in 1807 when the UK passed the Slave Trade Act.

Where there are two trees in planters used to be a large ventilation shaft. So in a way, where the yard shrank by expanding the office’s ground floor, it also got larger by removing a big block of ventilation shaft from the yard.

The paved area for pedestrians also used to have a single large vent clad in dark granite, and a little bit of seating. This was replaced with a cluster of smaller and more interesting circular spaces, which also massively increased the number of seating spaces.

The corners of the yard split off into a cluster of narrow alleys that survive from the original 16th-century layout, and part of the reason for the refurbishment of the yard was to remove the big ventilation shafts as they were impeeding pedestrians. The yard is now a much easier place to walk through and head off down the side alleys as people really wanted to do all the time. 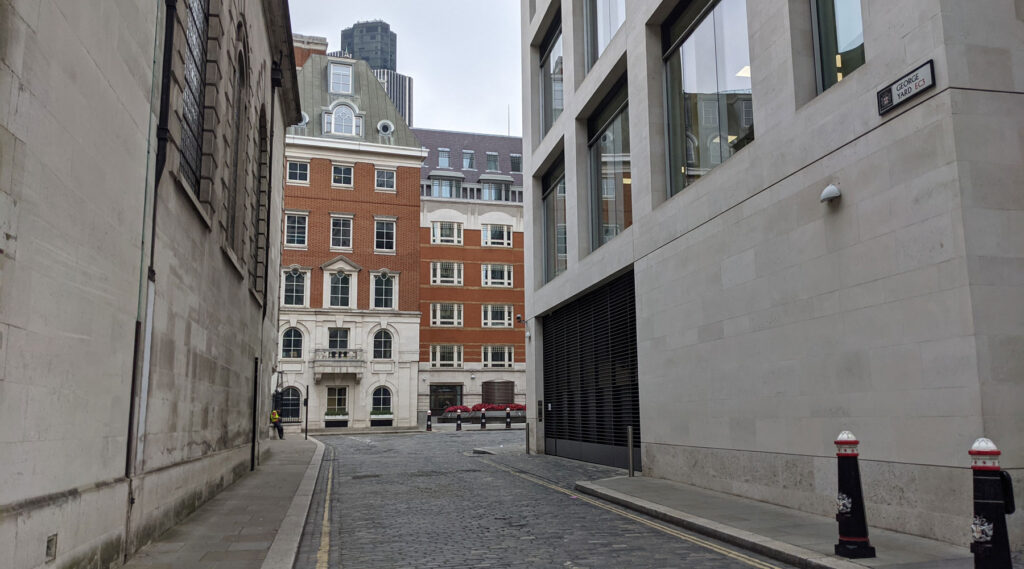 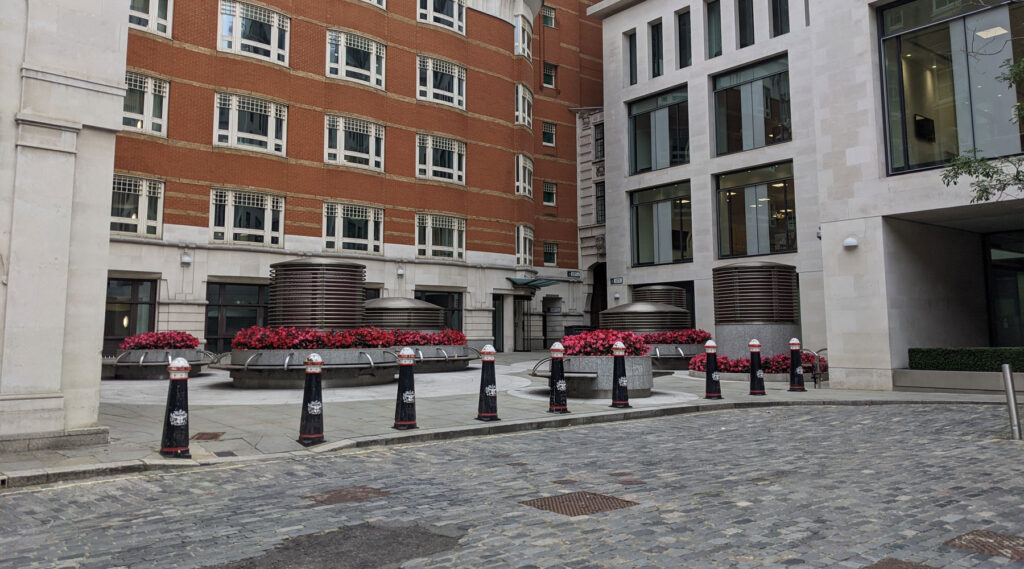 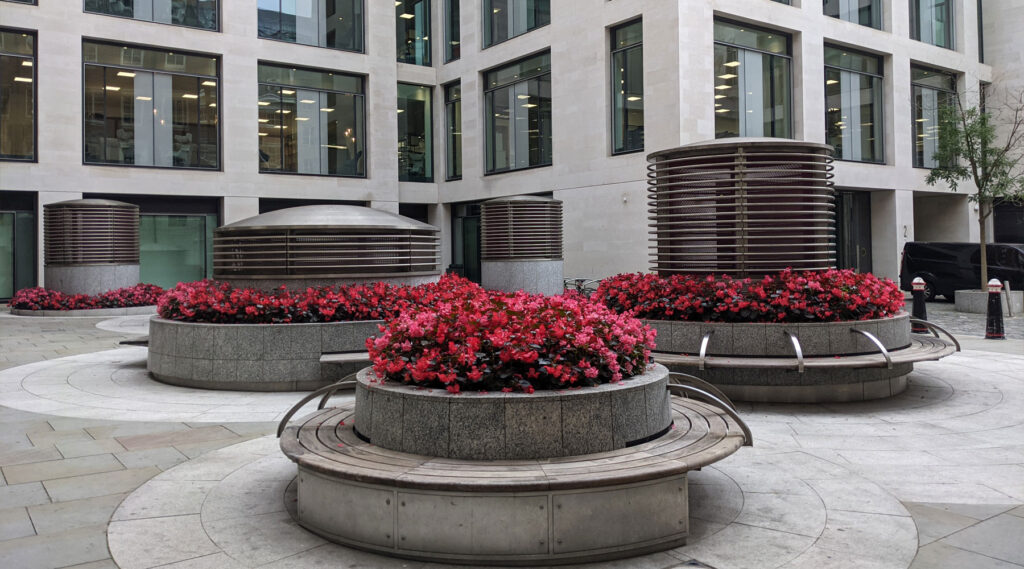 Stunner: Little Elm rallies from 20 down to top Bowie in...

Kenya: UN steps up protection for drought-hit women and girls