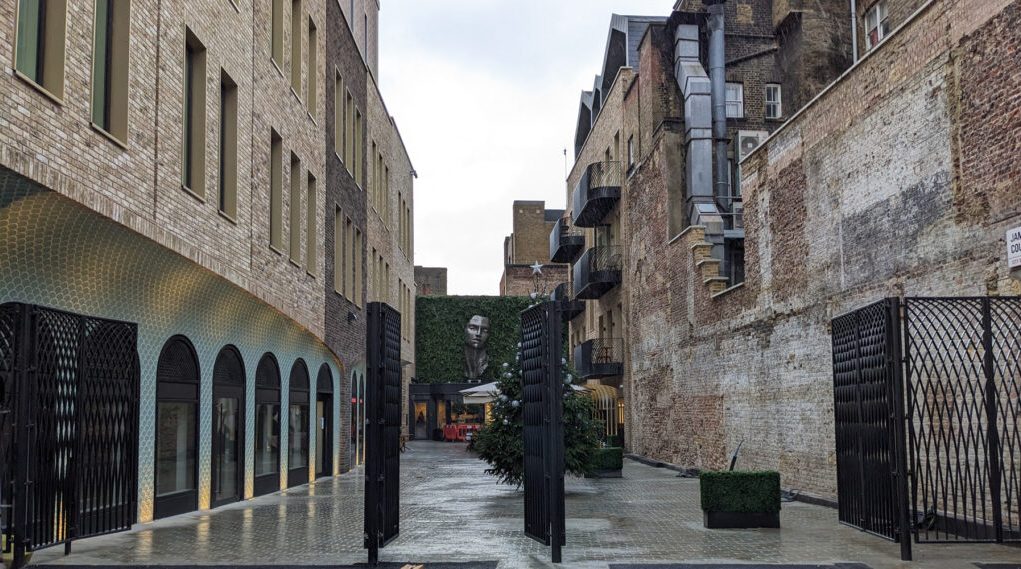 This is a fairly new open courtyard and alleyway that replaced a small sealed off cul-de-sac as part of a large redevelopment of the former Foyles bookstore. 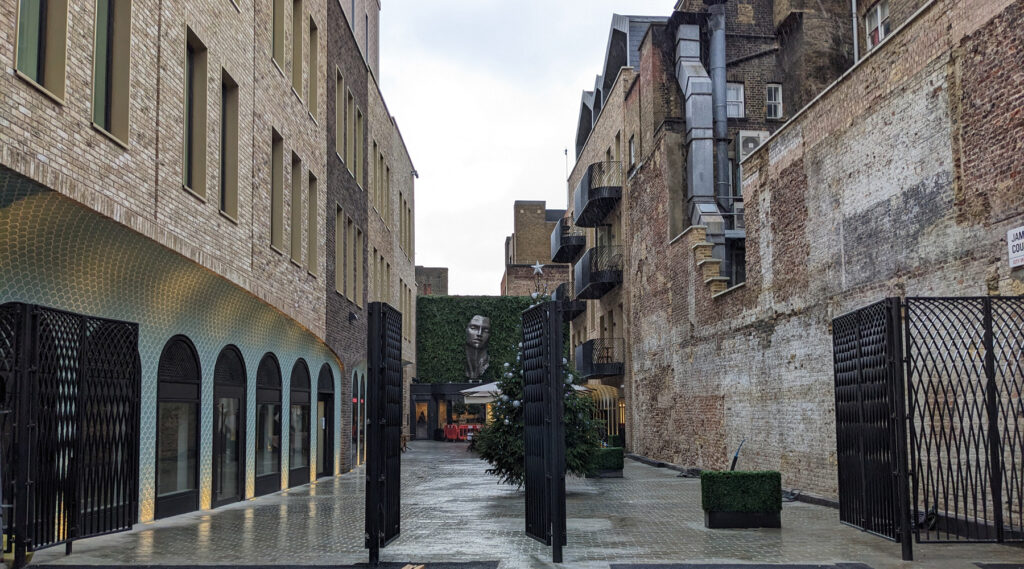 This part of London developed from fields from the 1700s onwards, but until the 20th century, was mainly a cluster of small shops and warehouses. There was a small courtyard where part of the current alleyway stands but nothing substantive.

The big development was the arrival in 1904 of Foyles bookstore and in 1916, the brothers, William and Gilbert Foyle rebuilt the southside of Manette Street to expand the bookstore, and again in 1929. At one point, it claimed to be the world’s largest bookshop.

Foyle’s moved out in June 2014, when the shop moved to its new home further down the road.

As part of a large redevelopment, the whole site was cleared, and a new and quite distinctive office block was created, and in doing so, also the new courtyard and alleyway.

It’s a fairly wide open space, that’s going to be used as outdoor seating when the weather’s better. One side shows the same curved tiled ground floor effect of the new development, albeit on a smaller scale than the rest of the building, and there’s a large curved glass atrium into the restaurant further down which has been designed to let light down into the deep basement below.

The arched forms are finished with ‘Wedgwood Blue’ tiles in reference to the historic use of the site, and the rose pattern in the tiles is a reference to Manette Street’s former name of Rose Street. The other side of the courtyard retains the rough brick walls that used to line the old courtyard space here.

At the far end is a small art gallery, but dominating the far end is a large sculpture of a metallic head. It’s called Paraiso (Paradise) and was created by the Cuban postwar and contemporary artist, Rafael Miranda San Juan. 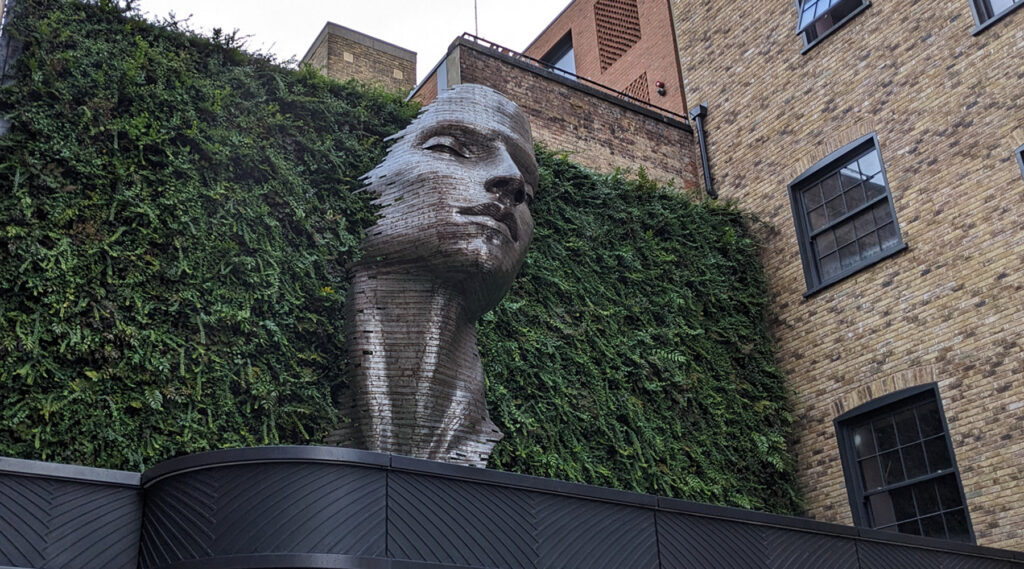 At the far end of the courtyard, it passes through a low brick-lined covered passage that leads out onto Greek Street. 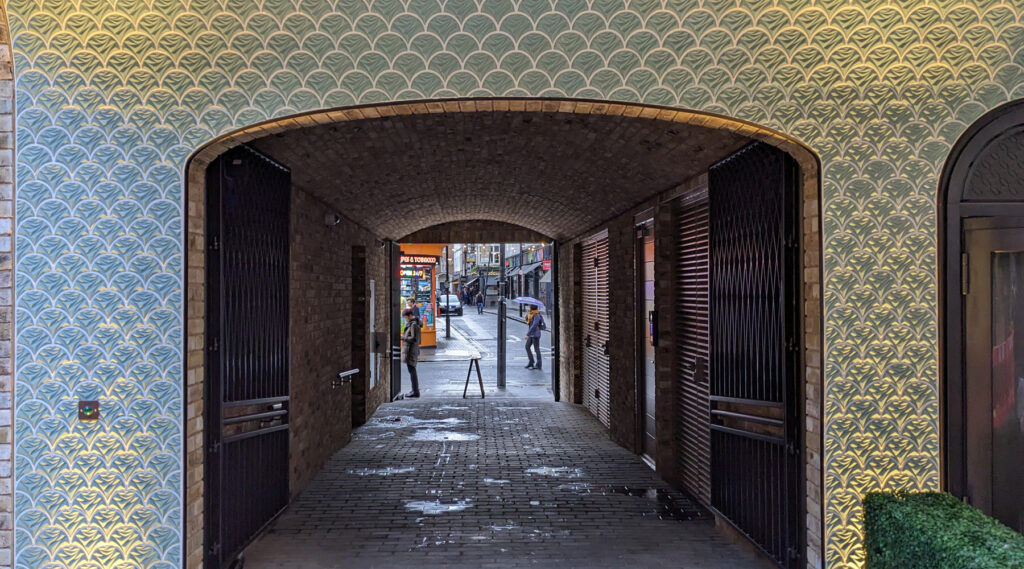 The buildings that the passageway passes through are significant, as they were one the London showroom of the potter Josiah Wedgwood between 1774 and 1785, and had enamelling rooms and warehouses to the rear

The alley is now called James Court, but the old narrow alley that used to be behind the Greek Street facade was called Wedgwood Mews. Although named after the former pottery stores, structurally it dates from rebuilding works in the 1870s, and just adopted the name.

Although all the original documents indicated that the new space would retain its original name of Wedgwood Mews, it was decided to rename it James Court.

The new entrance to the alley is also not where the old entrance used to be. They moved it, although only slightly.

The alley used to be in the narrow arched doorway next to the square entrance, which itself used to be a cafe until they demolished it to create the new alley entrance. Along with shifting the entrance, the developers also refurbished the retained facade along Greek Street giving a cleaned up appearance. 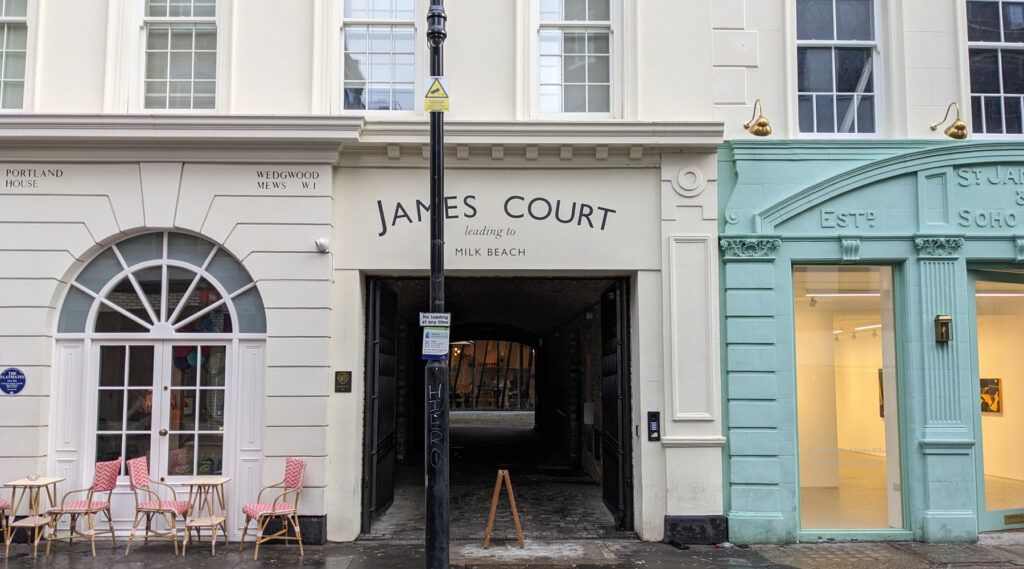 The end result is a lot more open space behind the shops if you know where to look, and a new covered walkway — or place to shelter from the rain — to get to it.