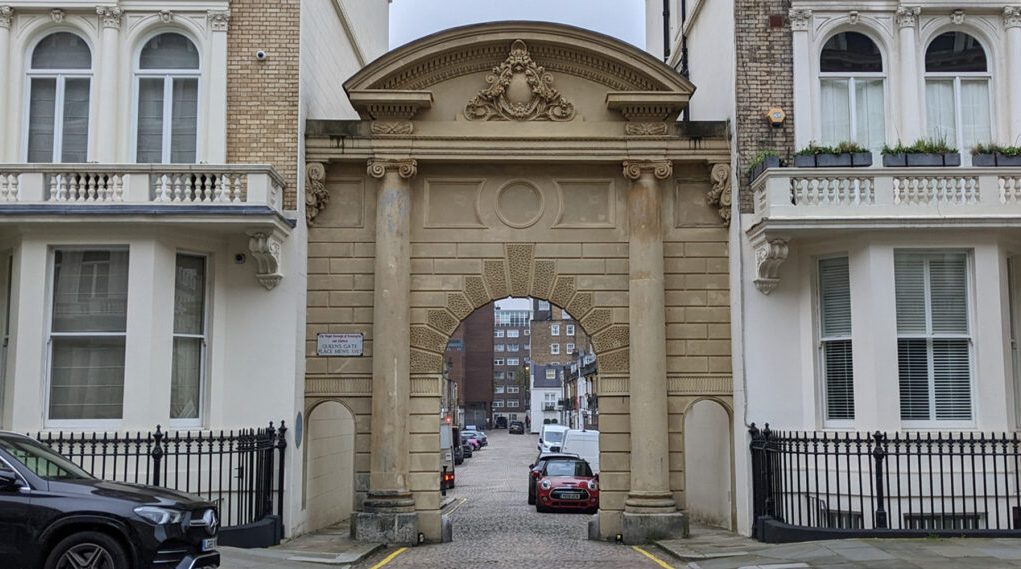 This is a grand-looking mews that sits close to the Natural History Museum and is unusual in that it’s one of the widest mews in South Kensington. 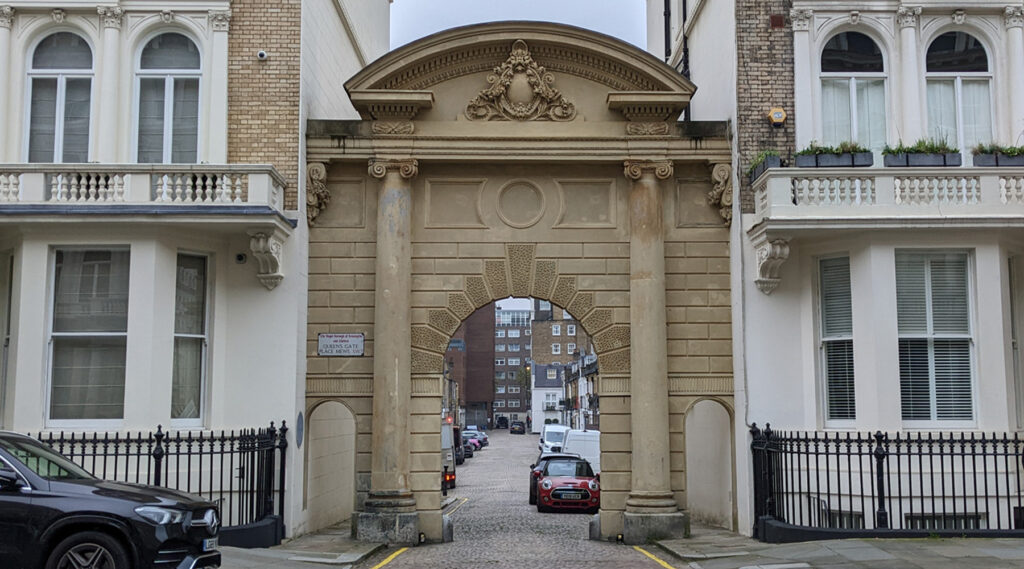 As with mews everywhere, once home to horses and servants for the grand houses on the other side, now it’s a row of luxury homes. However, it’s also home to a luxury of another sort, the successor to the horse-drawn carriage — luxury cars.

The mews was built as a consequence of the Great Exhibition, as the successors, the Royal Commissioners for the Great Exhibition brought what was at the time mostly market gardens and fields from Henry Browne Alexander, whose family owned the land. The purchase allowed the laying out of the main Queen’s Gate road (originally Prince Albert’s Road) that runs up to Hyde Park and is the western border of the “Albertopolis” cluster of museums and educational facilities. 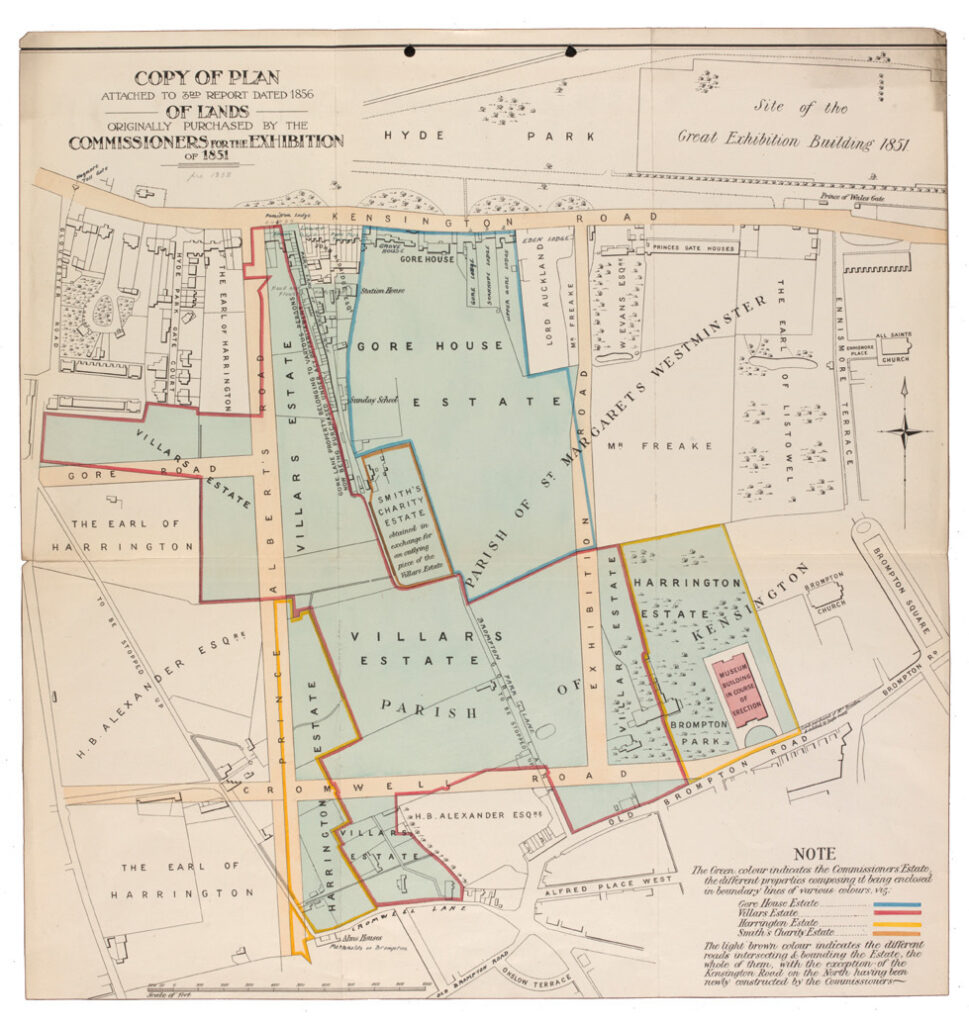 The mews is at the bottom left corner, by the junction of Cromwell Road and Prince Albert’s Road (c) Royal Commission 1851

To provide horses and stables for the grand houses on Queen’s Gate, behind them, Queen’s Gate Place Mews was constructed.

The mews is one of the few in London to have a formal gateway, although in this case, just at the northern end where the Mews feeds into Queen’s Gate Place. There’s a blue plaque next to it noting that the arch was cleaned up in 1977 for the Queen’s Jubilee.

As with many mews, what looks like a small house from the outside often conceals a surprisingly large space behind those old doors — often thanks to digging down and expanding over any spare gaps at the back.

The mews has also been the home to Madonna and Guy Ritchie, have featured in a number of films and are the current home of Oscar-winning producer Lord David Puttnam, best known for films like Chariots of Fire and Bugsy Malone. 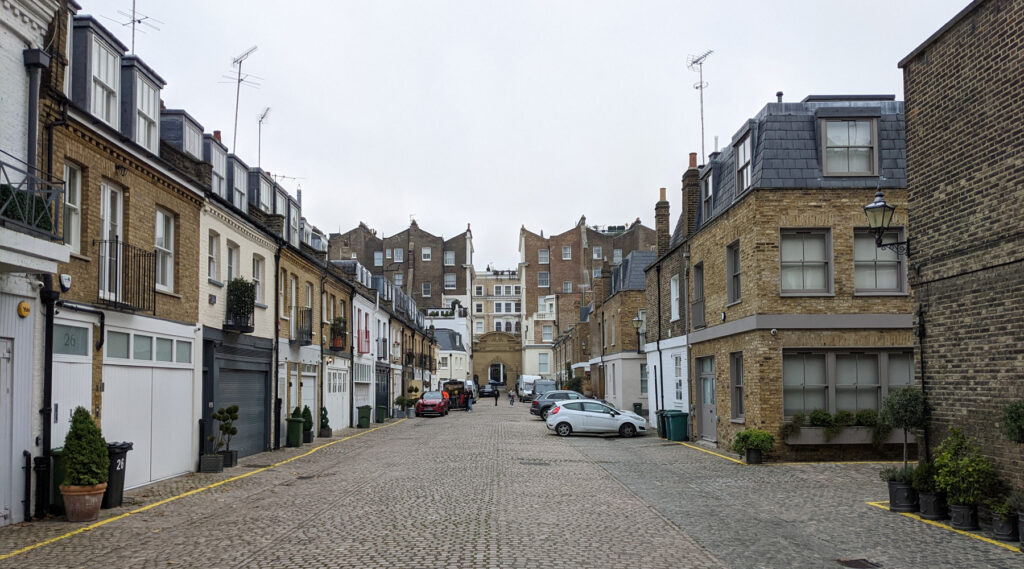 However, down here is also Fiskens, a dealer in luxury cars that is continuing a long heritage of motorsports being based in the Mews. Alain de Cadenet ran his Le Mans team from the mews and still lives there, although these days, only Fiskens remains as an actual dealership.

They recently refurbished their mews showroom, although when the doors are locked, you’d have no idea that behind a fairly anonymous looking white garage door is a fleet of luxury motor cars.

They once got a parking ticket though, when leaving a 1970 Ferrari 512 M outside in the mew while shuffling around some cars in the showroom.

Jets Ex-First Rounder Called out as ‘Worst Player’ on Team

The World is Burning. We Need a Renewables Revolution