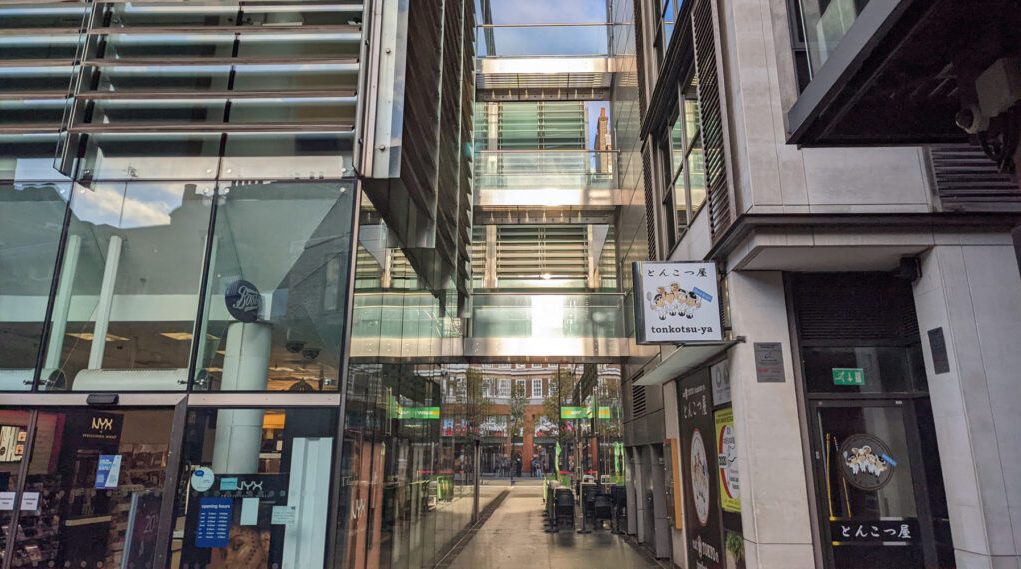 This is a modern looking alley next to Oxford Street, that thanks to ancient debts, is owned by the City of London, but is also the site of possibly the most expensive clerical error in human history. 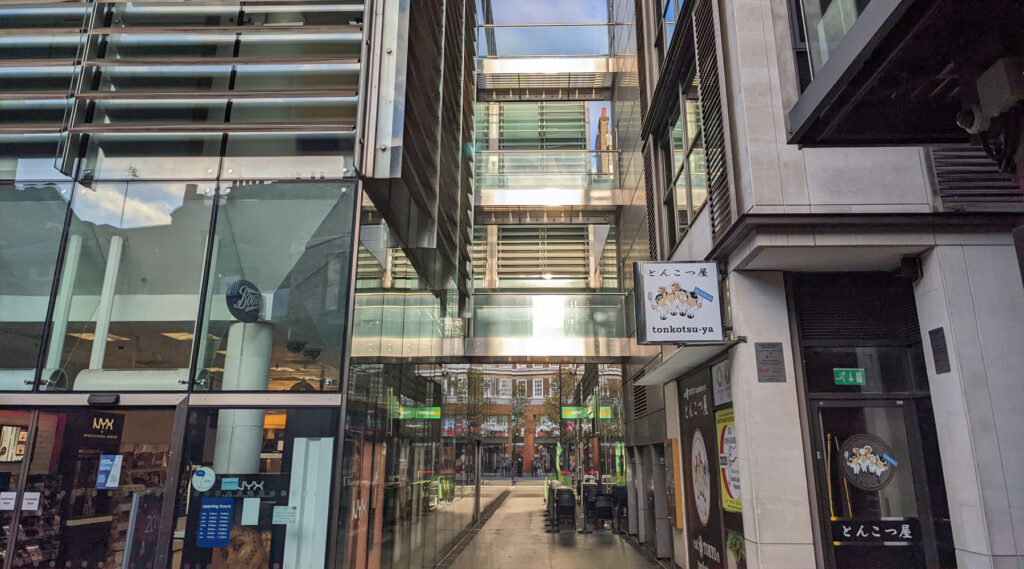 The alley crops up early in the development of Oxford Street and may have originally been called Silver Court, as John Roque’s map of 1746 shows a similarly shaped alley in roughly the same location as the current alley. Within 50 years though, it’s showing up on R Horwood’s map as being split with two names, Oxford Buildings and Woodstock Court. 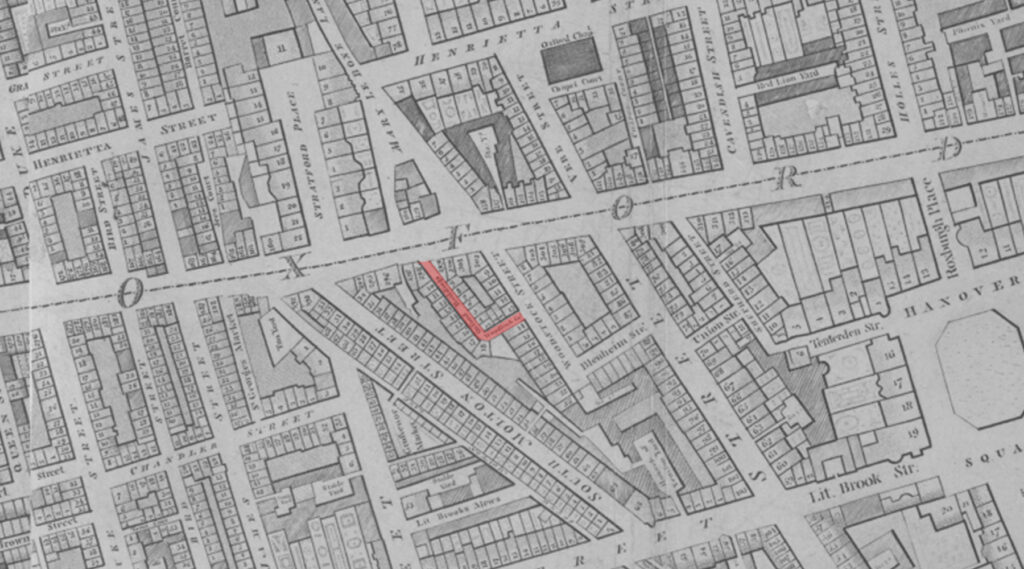 By the early 19th century though, this was considered to be one of the worst slums along Oxford Street, packed with Irish poor living in rundown tenements. There was an attempt at social cleansing of the area, but eventually, in 1865, the City of London, which owned the land decided to clear the entire site and redevelop it.

Various plans came to nought though, until a nearby furniture dealer, Angelo Sedley agreed to take a lease on most of the site and 1872-3. As part of the agreement, he was allowed to put a gate on the alley, and also rename it to bring attention to his furniture manufactury.

And that’s how the alley gained its current name of Sedley Place – it’s an advert.

It didn’t change much in the 19th-century, and although there was bomb damage during WW2, with the southeastern corner of the alley in ruins after the war, and repaired, not much changed until the turn of the current century.

The current modernist appearance comes from a large redevelopment in 2003-5 to a design by the architects, Fletcher Priest on behalf of Welbeck Land and the City of London. Before the redevelopment, the alley was lined with narrow retail kiosks with chambers above with many of the buildings still showing bomb damage from WWII.

The £23 million redevelopment is made up of a five-storey retail store and offices, retail kiosks, residential apartments, studio offices, a restaurant and café along Woodstock Street and a new public square.

The alley retains a thin strip of kiosk shops on one side and has a giant branch of a well-known pharmacy and seller of food deals on the other. Notable about the retail store is that the upper floors look like they’re clad in a solid wall of marble, but in fact, it’s thin slips of marble that’s been bonded to glass by Artifex London. The thinness of the marble makes it translucent and lets light through, while the glass backing gives it the strength needed.

Sitting above the alley is a  two-storey suspended glass structure that turns the alley into a covered walkway. The alley is mainly lined with metal cladding, giving it a fairly dominant aesthetic, although it comes across as more functional than appealing. 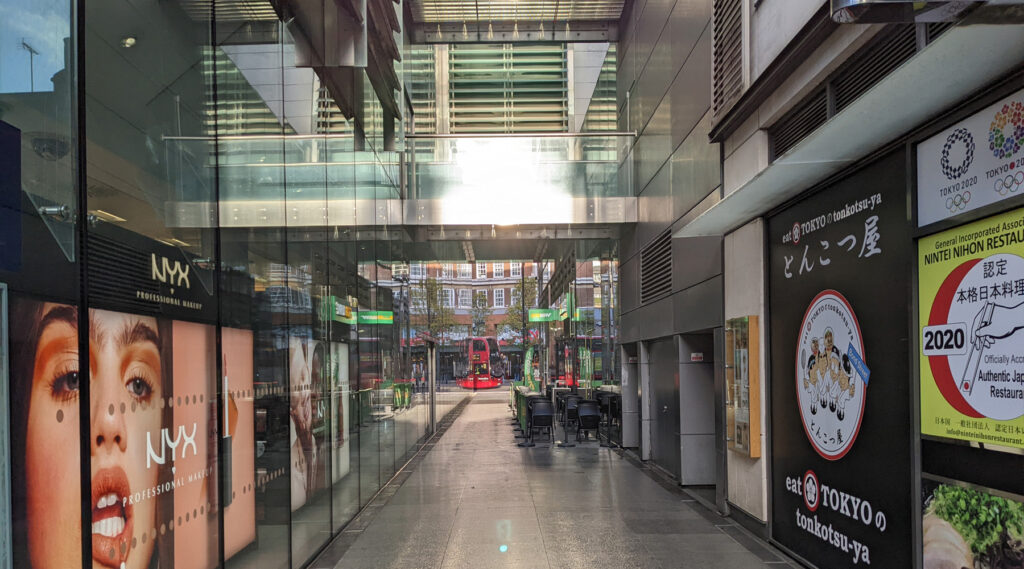 At the L-shaped angle at the southern end of the alley is a semipublic space sometimes known as Sedley Square, and away from busy lunchtimes is a bit of an unexpected open space for this part of London. 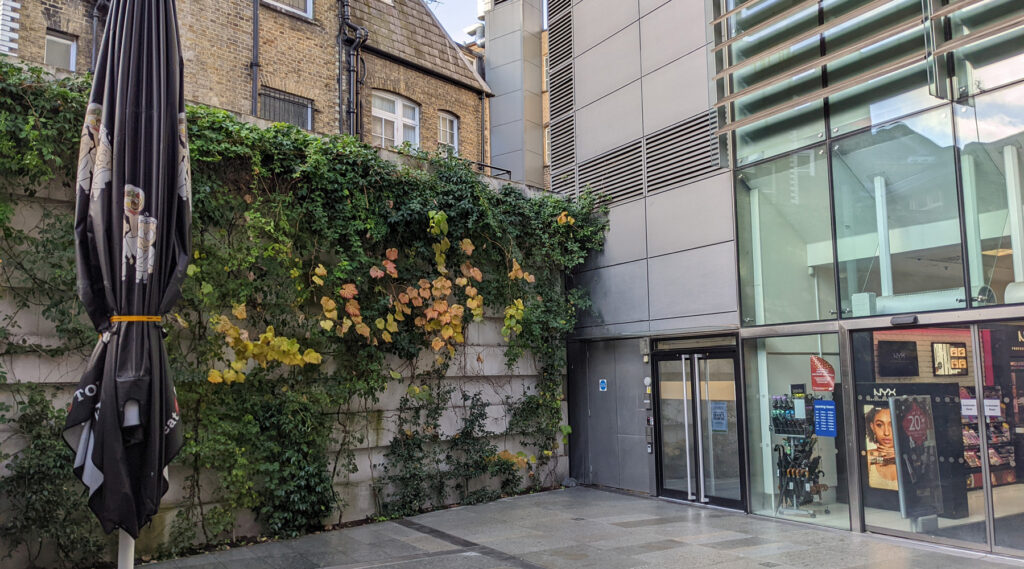 The second leg of the alley is more appealingly lined on one side with a block of flat clad in brick which gives this part of the alley a warmer more human scale feel to it. 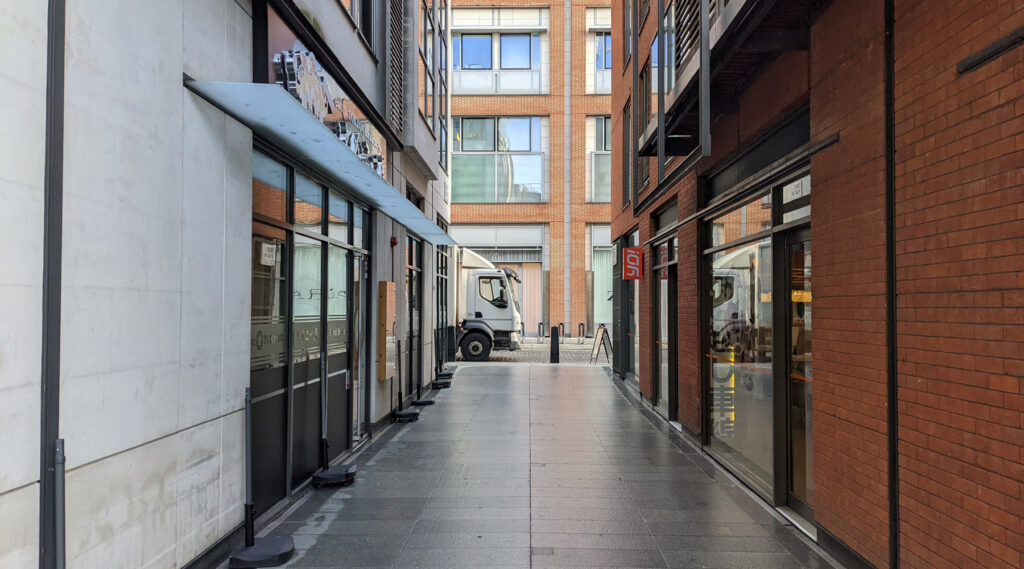 Although the City of London still owns the ancient freehold, the buildings above are now owned by the Scottish Widows pension fund, who paid £76 million for them in 2011.

Quite how the City of London came to own the land starts 400 years ago with an agreement in 1617 to lend money to King Charles I, which with other loans meant that by 1628, the King owed £350,000 to the City of London, which at the time was a vast amount of money.

The debt was secured on land owned by the King, which for a short time made the City of London one of the largest landowners in the UK, and the City set up a City Lands Committee to manage what was often known as the Royal Contract Estates. Over time, the City sold most of the land it had acquired, except the Conduit Mead Estate, a large chunk of land around Bond Street, and the City of London still owns the freehold of the estate.

However, the City messed up. They could have a far higher annual income from the leases, but in 1754 they accidentally granted perpetually renewing leases on the lands, with only a modest rise in value each time they renewed. The City intended to grant their tenants leases that would renew every 14 years for up to 96 years — except that they forgot to add the “up to 96 years” bit of the text, making the leases perpetually renewable, at very at favourable rates.

A tediously long winded pamphlet published in 1744 alleged corruption, but the City maintains it was a clerical error. Realising their mistake, they tried to trigger lease break clauses or expensively bought out leaseholders, but understandably, most clung onto their peppercorn rent leases. Finally, in 1925, the City was able to convert the rest of the tenants onto 2,000 year leases instead.

But it’s going to take another 1,903 years before the City of London can finally undo the mistake of 1754,  claw back its leases and start charging full market rates.