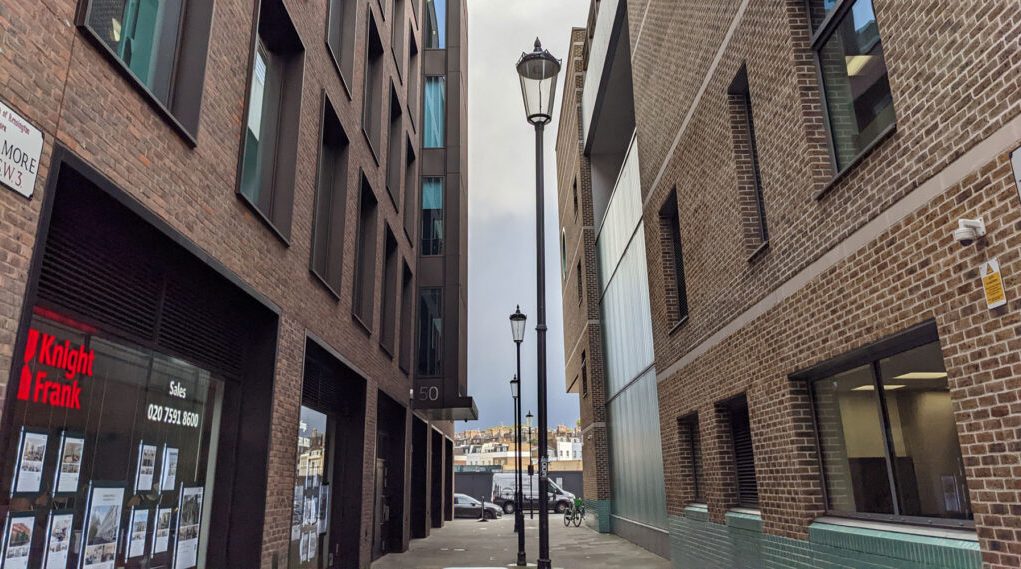 This is a fairly new alley that came into existence in late 2017 due to a large redevelopment of several sites in close proximity to each other. The alley passes between two modern buildings, but until recently both buildings and the alley were taken up by a single occupant, a large Victorian era primary school. 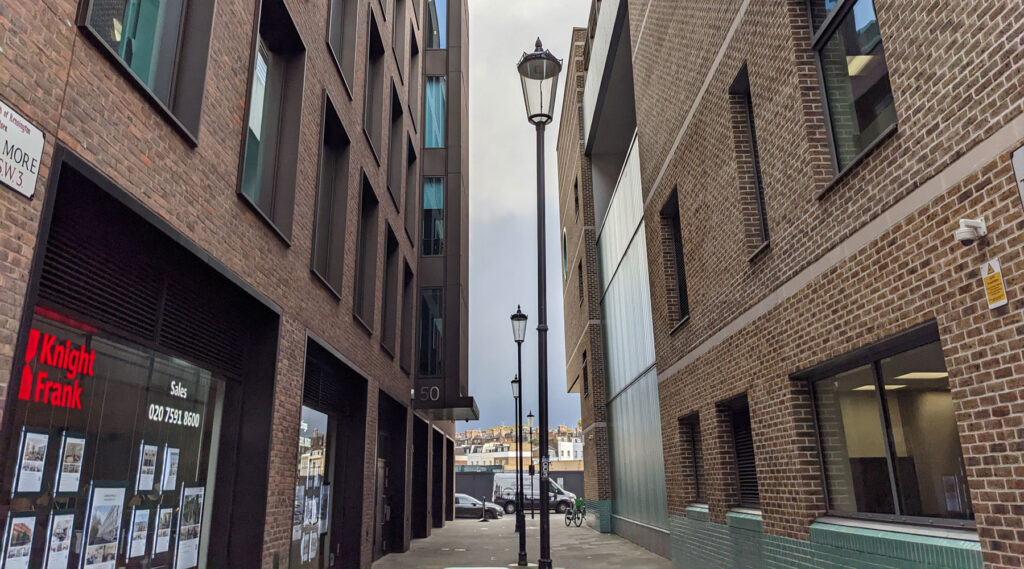 This part of London was still mostly fields until the 1800s, when the roads were laid out and residential housing built along them. By the 1860s, the area was heavily developed and there was a need for a school, so in the 1870s, a block of houses was demolished to make space for the Marlborough schools — three side by side, one for boys, for girls, and for infants.

The Marlborough Road School building was built by the School Board for London and is a classic of the era – a large impressive school building in the Queen Anne style (pdf), surrounded by a high wall with a modest amount of playground space around the building. The schools opened in 1878, and were named after Marlborough Road, later renamed Draycott Avenue.

On the other side of the road to the east of the school was a large warehouse building called the Clearings warehouse, built by John Lewis in the 1930s, and the old terraced houses that used to surround the school were largely redeveloped into mansion blocks in the 1930s-50s.

The council wanted to rebuild the school as the old building wasn’t suitable for modern teaching and they needed more rooms, but how to rebuild a school without closing it seemed to be an insurmountable problem. Until John Lewis announced that they wanted to demolish their old warehouse building. The old warehouse became a temporary school for a few years while the old school was demolished, and once the replacement school opened, the warehouse could be demolished.

The alley came about thanks to the public consultation for the redevelopment.

There were limited pedestrian routes between the two main roads, but the consultation revealed that in the past, the school gates had been left open providing an informal passage during the daytime. However, these days, schools are more like fortresses, and the gates were locked. The local residents wanted a permanent passage to be created.

This was partially possible because the school was planning to move its playground spaces from the ground to the roof, and with less land needed, they could build a commercial building beside the school, with an alley separating them.

What’s been built are two reasonably complementary buildings, both faced with brick and detailing. The school building is a bit more interesting with a tiled level at pupil height and a three-storey high glazed wall to let light into the reception area within. 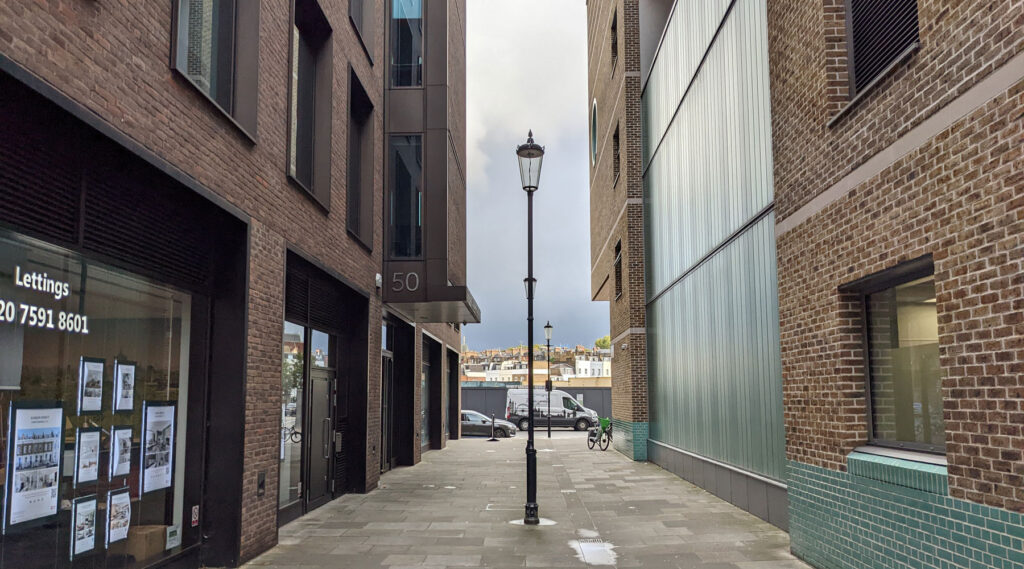 Opposite is a fairly generic office block with shops on the ground floor. One is occupied by an estate agent, and the eastern corner still looking for a tenant. At the eastern end, a building site where the old John Lewis warehouse was will soon be a block of residential flats.

A nice detail is the street lamps in the alley, which are of a classical heritage design to almost suggest this modern alley has been here for a lot longer than it has.

The formal naming of the alley took place on 21st June 2017 when Kensington and Chelsea issued the naming order under the provisions of the London Buildings Act (Amendment) Act 1939 which governs how street names are changed and allocated. The alley is named after King Henry VIII’s former Lord Chancellor, Sir Thomas More, who lived in Chelsea until he fell out of favour with the King, with the inevitable consequences for his head and shoulders.

However, even though the office’s main entrance is in the alley, the address is 50 Sloane Avenue. Got to use the posh name than a mere alley for your posh new offices. 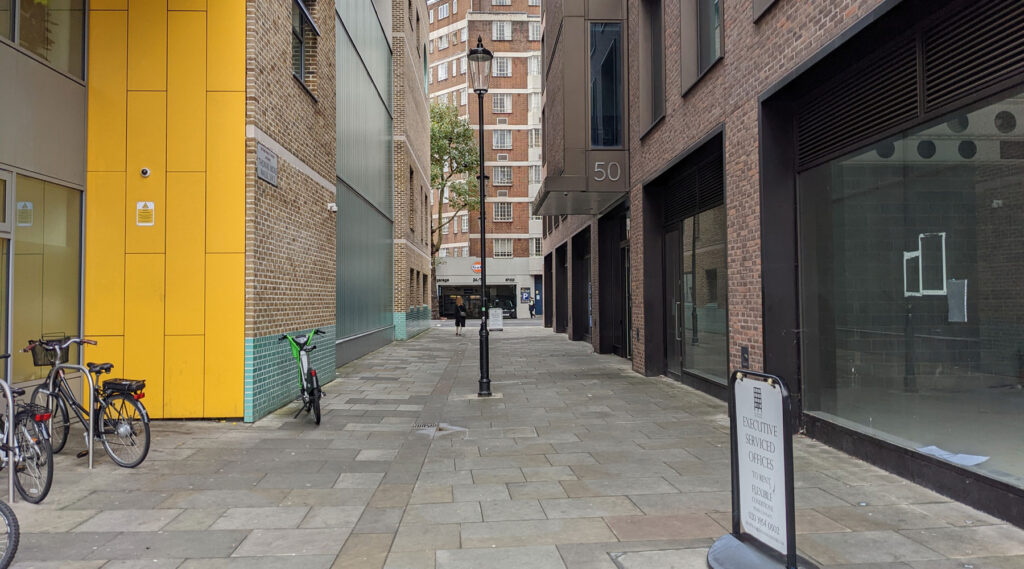