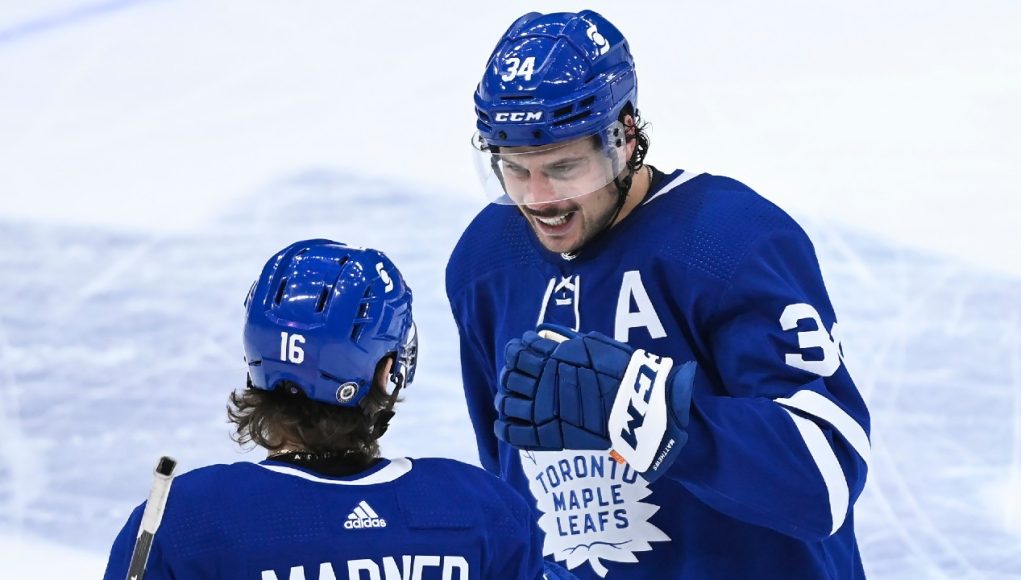 Twenty-four hours after reeling off a needed win over Detroit back home, the Toronto Maple Leafs found themselves staring down a familiar test Sunday night in Philadelphia.

“I think it’s going to be a similar type of game,” head coach Sheldon Keefe had said ahead of the puck dropping on Toronto’s final meeting with the Flyers this season. “It’s going to be a team that skates hard, forechecks well, gets on top of you. They like to make it hard for us to break out and get going — it took us a while to get that sorted yesterday.”

The Maple Leafs faithful needed no reminder, having watched their club get outshot, outscored and outworked through the early goings of the first half of this back-to-back — that performance following a couple uninspiring losses to kick off the new year — before Toronto eventually found its game and turned the tables on the Red Wings.


Streaming Home of the Toronto Maple Leafs. Stream the most games at the lowest price, plus hundreds of other NHL games, the All-Star Game and Stanley Cup Playoffs. SN NOW STANDARD and PREMIUM let you choose how much hockey you want to watch.
CHOOSE PLAN

From the opening seconds of this one, Keefe’s squad was flying, David Kampf getting a chance on the opposing cage in the opening seconds, Auston Matthews setting up William Nylander for a good look soon after, Timothy Liljegren feeding No. 88 for another just after that. The message was clear, the tone set early.

Midway through the opening frame, the early onslaught paid off, Calle Jarnkrok bagging his ninth goal of the year to put the Leafs up 1-0.

As is so often the case with this club, though, it was Mitch Marner who served as the architect of the sequence, No. 16 displaying some all-world poise as he weaved into the offensive zone, waited out the Flyers’ defence for what seemed like an eternity, before whipping a perfect cross-ice feed over to Jarnkrok for the one-time finish.

It was just the beginning. By the end of the night, the pair and linemate John Tavares had amassed nine points together, each member of the line leaving the Wells Fargo Center with three points of their own.

Go back through the trio’s film, and you won’t find empty calories there.

You’ll see Marner with yet another example of that elite patience later as he set up Conor Timmins for a goal in the second — incidentally, the first tally of the 24-year-old defenceman’s NHL career.

You’ll see Jarnkrok bearing down and battling, deep in Philly’s zone and off the faceoff, to set up Liljegren and Tavares for a couple more goals.

And you’ll see the captain, after picking up two points through the first 40 minutes of the eventual 6-2 win, coming up with a beautiful feed to Matthews for the goal that capped it all off in the final frame.

All told, Tavares, Marner and Jarnkrok have combined for a sterling 33 points in the nine games they’ve suited up for together, with Jarnkrok — who himself has 14 points through his last 13 games — finally finding his place in this squad after looking out to sea through the early goings of the campaign.

While the top six did their job in delivering the eventual victory, with the captain’s line feasting and Matthews sniping his 20th of the year — making him just the third American in NHL history to begin his career with as many 20-goal seasons as he has — it was the names further down the bench that made the difference in this one.

After seeing three of four goals come from Marner and Tavares on Saturday, Sunday’s win was of an entirely different flavour, with Jarnkrok, Timmins, Zach Aston-Reese and Liljegren all contributing, building up a 4-2 lead for the club before Tavares and Matthews put the game away in the second half.

Given the impact the injury bug’s had on this team’s campaign so far, it’s the depth on the blue line that should be most encouraging for the Leafs faithful.

As Toronto continues to rotate blue-line bodies in and out of their lineup due to those injuries, the replacements have continued to step up with meaningful performances. This time it was TJ Brodie sidelined — and later said to be day-to-day — and Timmins drawing back into the mix.

The young blue-liner gave the blue and white all that could be expected of him, putting in a solid performance over 18 minutes of ice and chipping in with a goal and an assist.

Maple Leafs kick down the door, but leave it open

Though the offence was rolling, and though the club did what it needed to do to get the W, there were still warning signs hidden among that pile of goals.

Twice Toronto built up a lead, and twice they let the Flyers back into the game immediately after — Travis Konecny scoring 16 seconds after Aston-Reese made it 2-0 for Toronto, and Nicolas Deslauriers getting one back just a couple minutes after Timmins made it 3-1.

Later in the game, too, after Liljegren and Tavares had added two more Leafs goals to the mix, pushing Toronto’s lead to 5-2, still the Maple Leafs left the door open just a little bit, gifting Philadelphia power plays and weathering storms of net-front scrambles as the Flyers pushed to cut the lead down further.

This time, they didn’t.

But while the 27th-ranked offence in the league couldn’t take that rope and pull their way back up onto the ledge, the same won’t be true for the game’s more prolific squads. The ones this club will need to get by, eventually, come post-season time. When the pressure will ramp up and the stakes will be real.

Impressive as the win was, impressive as the offensive outburst was, key among the takeaways from this night should be the need to further focus on quieting those comebacks before they pick up steam.

Murray gives these Maple Leafs all they need

The only reason the Maple Leafs didn’t get burned by leaving that door open in Philly? Matt Murray.

It didn’t look flawless, but Murray was solid against a Flyers squad that tested him all night, the netminder turning aside 34 of 36 shots to keep Toronto’s lead intact until the final buzzer.

As for the two that did beat him, it would be tough to pin those squarely on Murray’s shoulders.

In both cases, a defensive gaffe left No. 30 all alone with a Flyers forward. The first was a rare Marner misstep, the winger firing an ill-advised cross-ice saucer pass through his own zone, only to see it snagged out of the air by Konecny, who had all the time in the world to put one by Murray.

The second was no less egregious, the Maple Leafs’ defenders leaving Deslauriers all alone behind them, allowing the winger to collect a pass and walk in uncontested before beating Murray with a top-shelf backhand.

That Murray held the Flyers at bay for the rest of the night isn’t necessarily a world-beating feat — see: 27th-ranked offence — but on a night that saw Toronto’s offensive depth shine as it did, all they needed from their netminder was for him to make that saves when they mattered most.

And through all the other net-front scrambles, partial breakaways, and defensive lapses, Murray did that. In doing so, the 28-year-old earned his 10th win of the season, and pushed his save percentage to a middle-of-the-pack .916 on the year, level with Ilya Samsonov.

The pair get their next chance to make good on Kyle Dubas’s bet on Wednesday, when Toronto returns home to face the Nashville Predators.

ZARA HAS LAUNCHED A COLLAB COLLECTION WITH THE STANDARD

THE FRAME X HOTEL RITZ PARIS IS BACK WITH ANOTHER DROP