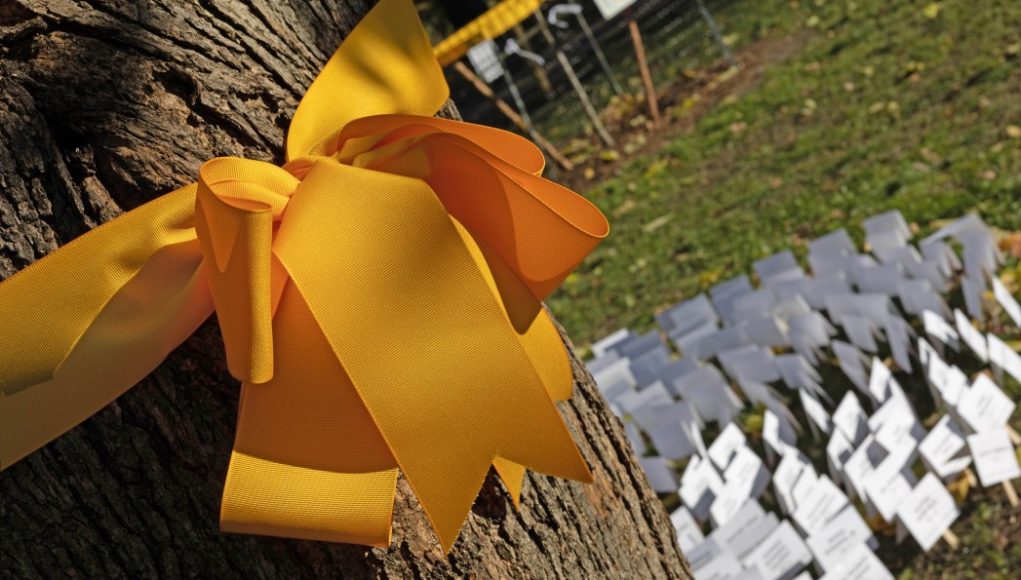 As we promised last week, the Adams administration and Families for Safe Streets cut the ribbon on the Memorial Grove for Victims of Traffic Violence in Lincoln Terrace/Arthur Somers Park on the eastern end of Crown Heights.

The mayor skipped the event, which was unfortunate, because all elected officials need frequent reminders of the toll that road violence takes on our city and, disproportionately, on lower-income communities and communities of color. Members of the group to which no one wants to ever join spoke passionately about how desperately they hope that their family member will be the last victim of a reckless driver, somber in the knowledge that we are not there yet.

So far this year, more than 220 people — fewer than last year at this same point, but more than any other year since 2014. And 42,974 people have been injured this year (not including a cyclist who was on his way to the Day of Remembrance event itself, Gothamist reported).

“Each death is devastating, and a heartbreaking reminder of the work that must be done to get Vision Zero back on track. We know how to prevent traffic violence,” Families for Safe Streets co-founder Amy Cohen said, referring to a package of bills pending in Albany that includes Sammy’s Law, which would allow New York City to set its own speed limits, and is named after Cohen’s 12-year-old son, who was killed in 2013 by a speeding van driver. (Department of Transportation Commissioner Ydanis Rodriguez and Parks Commissioner Sue Donoghue ably represented the administration at the ribbon-cutting.)

Sunday was a good day to remember the Day of Remembrance because tonight, members of Upper West Side Community Board 7 are going to continue their slide from progressive values to revanchism by passing an offensive anti-safety resolution that will certainly add more mourners to next year’s Day of Remembrance.

The resolution appears to be a fit of pique over a resolution passed in September by Manhattan Community Board 8 — which covers the portion of the Upper East Side opposite Central Park from the confines of CB7. The CB8 resolution demanded “fully protected crosstown bike lanes approximately every 10 blocks between 60th and 110th streets … on both sides of the park, and a two-way protected bikeway around Central Park.”

But the proposed CB7 resolution that will be debated tonight shows that more than a park divides the Upper East and Upper West sides.

That’s foolishness, plain and simple. As Streetsblog reported last week, Central Park is not safe. Since the start of this year, there have been 56 collisions inside Central Park, resulting in 37 injuries, including five cyclists and six pedestrians, according to NYPD stats. Beyond that, in just the month and a half since CB8 passed its resolution calling for crosstown protected bike lanes, there have been 389 reported crashes between 59th and 110th streets on both sides of the park, injuring 34 cyclists, 36 pedestrians and 82 motorists — numbers that will certainly go down if the roadways are redesigned for safety.

Until then, here’s the roundup from the weekend:

Hello, ?@NYPD1Pct?, I’d like to turn myself in for committing CRIMINAL MISCHIEF as I fixed this perp’s defaced plate at Broadway and White St. https://t.co/OW9MXZwptI pic.twitter.com/kBAd6ZRV7A

Hey ?@NYPD72Pct? we have some CRIMINAL MISCHIEF going on on Fourth Ave! Arrest? pic.twitter.com/E93mgvSYRS

Hey ?@NYPD72Pct?, there’s some CRIMINAL MISCHIEF going down on 17th St. between 8th and PPW. You probably should arrest the tipster not the perp! pic.twitter.com/EejFCoRuiH

Stringer sparks scuffle with teammate as Bombers training gets heated

Funeral to Be Held for Philly Parks and Rec Worker Killed...