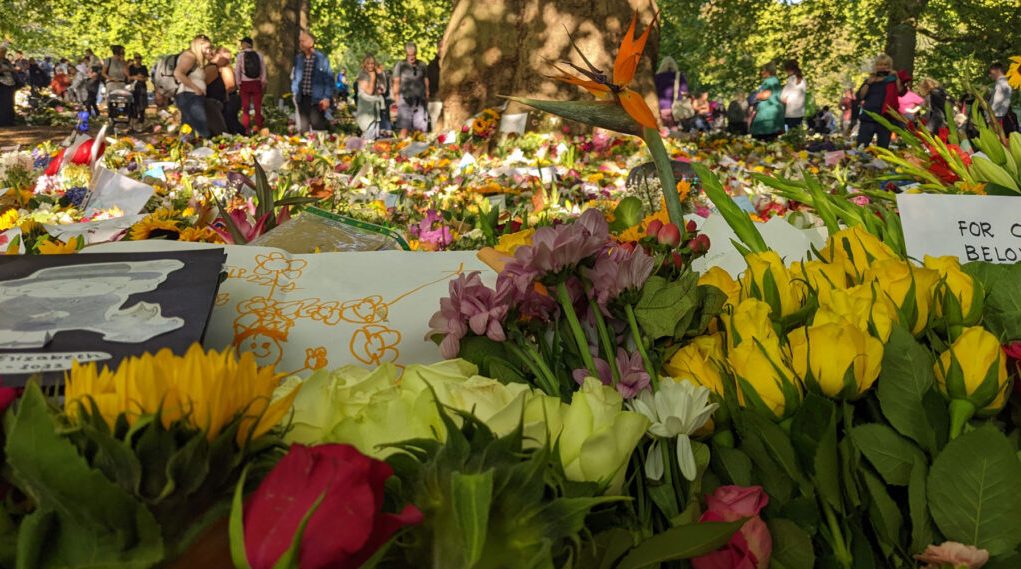 Green Park is sealed off and crowds swirl around the high fences that have been erected around looking for the entrances to get within. Anywhere and anytime else this would be the traditional sign of an English summer when fields are turned into festivals, but this is a festival of mourning.

Once you’ve penetrated the outer wall, an outer walkway takes you around the central enclave that’s now become a symbol of people’s reaction of the death of a Queen — the huge arrays of flowers. 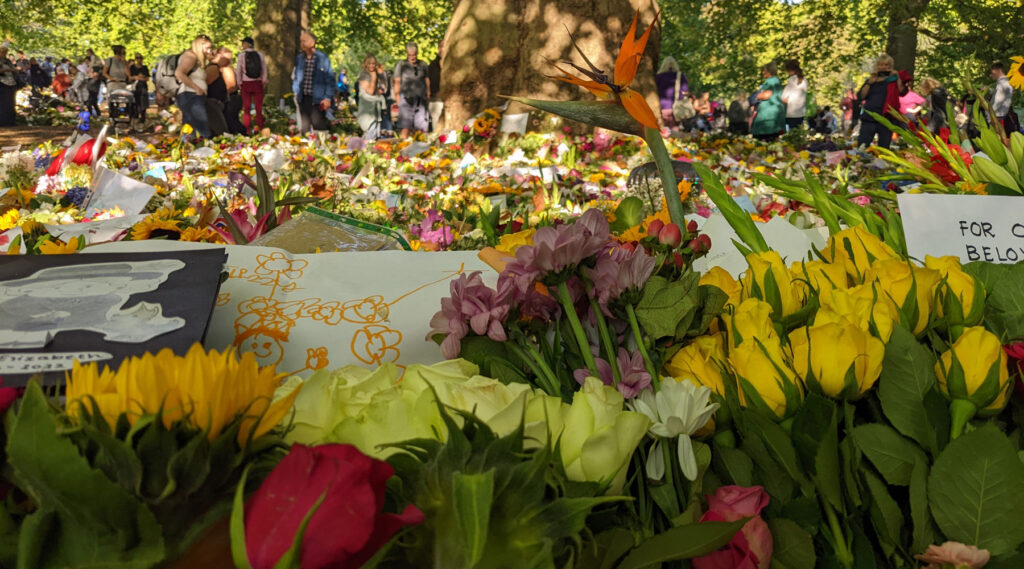 A chap standing near the entrance to Green park with a bucket of flowers called out last flowers in a tone of voice that sounded more like a motorway sign warning that the next services are 52 miles away. A cyclist learned the hard way that an area overflowing with police is not the best place to cycle through the pedestrians.

People pause to stop at the railings, most come to see, some clutching bunches of flowers of their own, but none clutching Paddington bears. Not now. Black signs dot the landscape with the sombre language of advice. This way, that way, remove the wrapping.

A lady moaned about the long walk to get to the second entrance. Clearly not one for the Lying in State queue. Most are in casual clothes, some clearly coming from work or dressed up for the occasion. A few are wearing Union Jacks.

Staff at the entrance to the floral zone offer to remove cellophane wrapping, so the arrival is dominated by the sound of crinkling plastic. A staff member is handwriting a new exit sign to go up somewhere. Black formal signs dot the landscape. 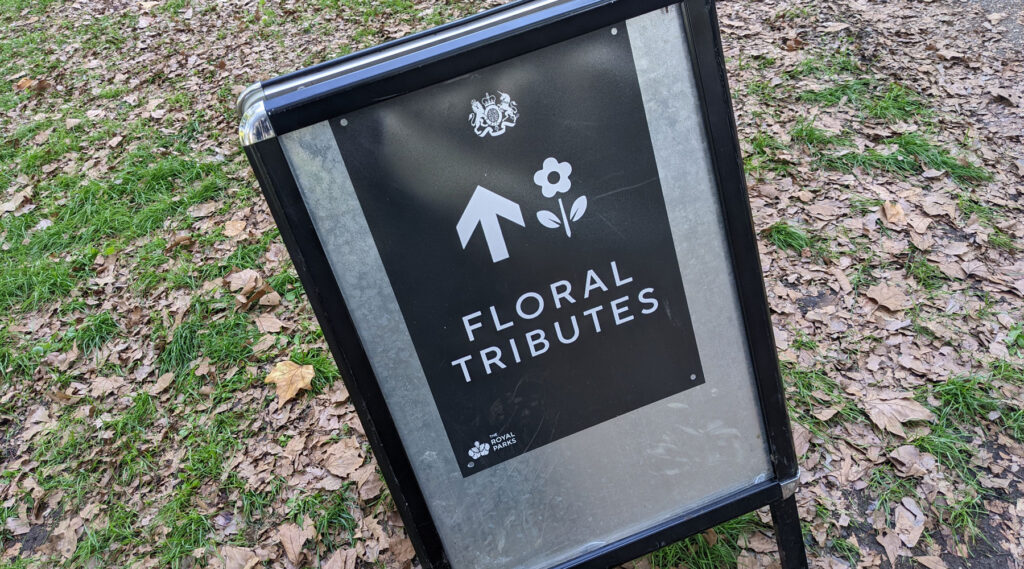 Unlike say the poppies in the Tower of London where there was near total silence, here there’s chatter going on. Low key, quiet, respectful. People taking photos, some taking selfies, but mostly people wanting to record what they see as a memory to last.

Volunteers helping out have carefully stacked flowers to create thick blankets of colour and placed the earlier gifts of large mementoes at the back so they stand out. Messages ranging from the shop brought cards to the message created on a home printer that’s already washed out in the recent rain.

All this is for a fleeting demonstration of often unexpected emotions from people who thought they would be at best moderately indifferent and realised it hurt more than they expected.

And so the crowds come.

And the apparatus of crowd control as well.

The fencing that’s gone up in short order. Walking around the area nearby and unusual numbers of police vans and ambulances fill the parking slots in the side streets. Rows of portable toilets provide relief. Temporary bins sprung up where they’re not usually needed.

Green Park station is now exit-only during the day to cope with crowds, and they’ve closed off half the road outside as well to create more space for people leaving the station. Purple low-vis jacket wearing people can be seen all over the place as an army of volunteer information providers sprung up from who knows where. Is there a strategic reserve of special event volunteers in storage somewhere?

Piccadilly in the late afternoon is usually busy, and yet today the crowds heading towards Green Park were walking with a determined pace quite unlike the meanderings of tourists.

A fleet of suspiciously clean JCBs rushes up and down Piccadilly at times, looking (as I later saw) like they’re being used to move heavy lumps of concrete around to reinforce an outer layer of road-blocking walls that starting to surround Westminster and Whitehall.

And thank you to the lady charging up St James’s Street growling how she “fucking hates the queen”, and barging people out of the way – including slamming me into the wall. That did my bad back no end of good, and I had forgotten the stinging arm where it grazed on the stone. Sadly reminded all too vividly when I jumped in the shower when I got home.

I get it, not everyone likes the monarchy, but why be so angry about something that other people like? Absolutely, campaign to change it, but shoving through people and slamming them into walls. Did she really think that was going to change minds?

Around St James’s Palace, fences prevent access to the Mall from the north side, and police regularly tell people they can’t squeeze through the gap. Further along Pall Mall, and the high walls are popping up to provide more visible indications that you shall not pass. Yes, you. No, you can’t just pop across the road. Sorry Madam, I know it’s inconvenient, but you will need to walk around to the other side. And so on.

The Mall is fenced off as so much of central London has been, lined with Union Jacks and a narrow gap in the fences to get across, with people stopping to get that rare photo of an empty Mall.

An even narrower security gate by Admiralty Arch is so narrow that they have to hold back people getting in to let people out, and then reverse to keep both sides happy. A chap calling out for people to keep moving as your side of the gate is opened. A few mutterings of why can’t they have more entrances, but mostly there’s still an air of relaxed forbearance of the inconvenience caused because it’s unseemly to complain at the moment.

Trafalgar Square is sealed off from the road traffic, turning the usually choked roads into a pedestrian paradise as people mingle around or try to find where exits in the high fences will let them get out or to the tube station. 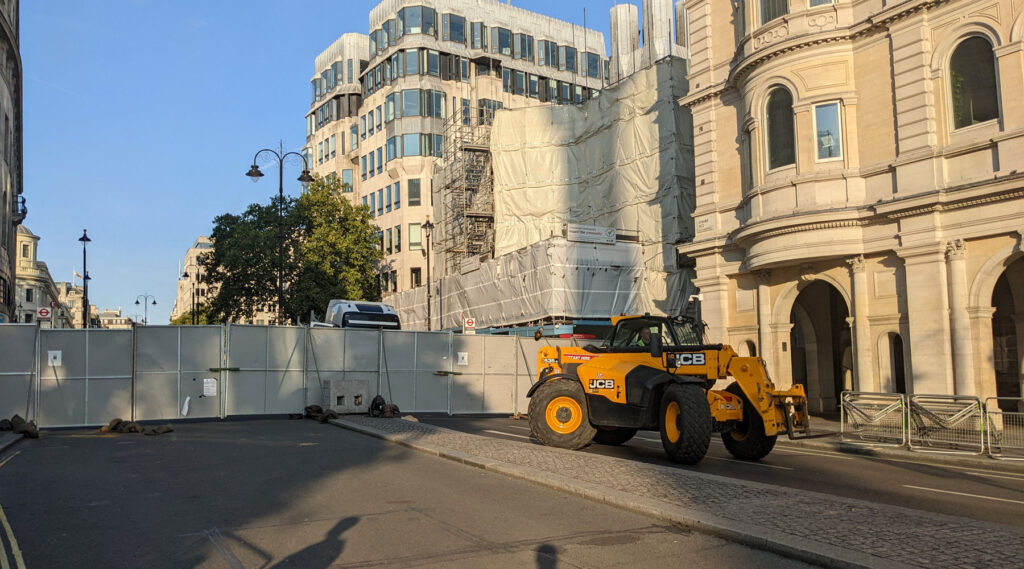 Heading down to Embankment tube station and things are wrong. Villiers Street is filled with people as it always is in the evening rush hour, but they’re heading the wrong way. People aren’t crowding into the tube station but heading out. People coming into London when they normally head out.

The death of the Queen has turned the world backwards.

But do come to central London, walk slowly through the crowds, see the scale of the operation that’s been thrown into action in just a few days and just feel the atmosphere of people coming to see, to pay respects, to also be here at this unique moment in time. 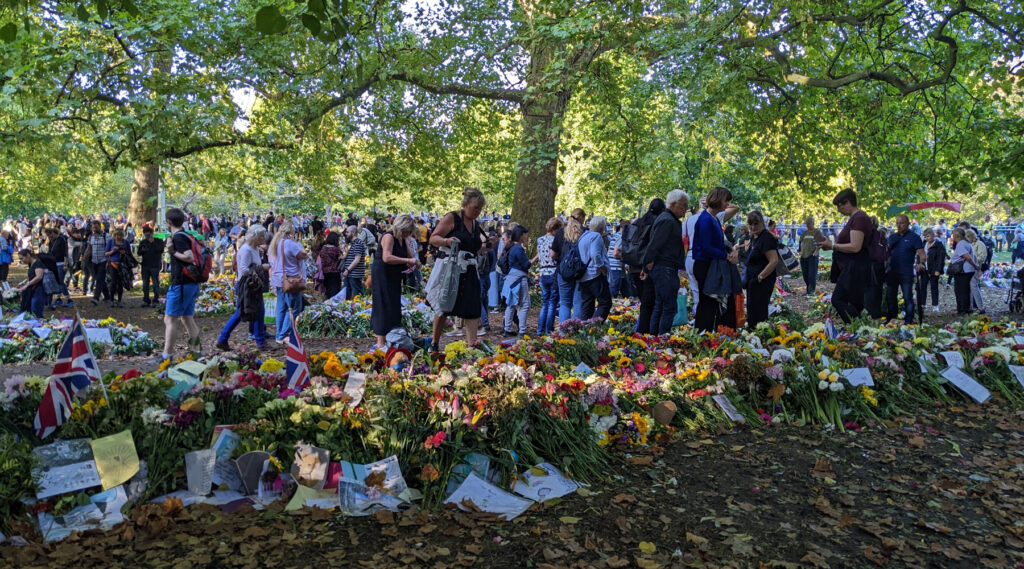 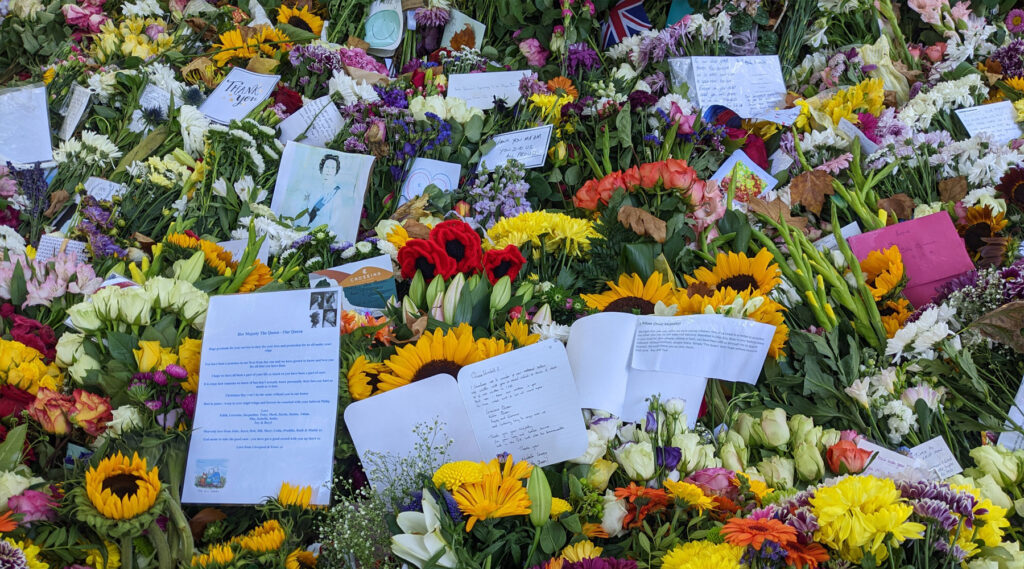 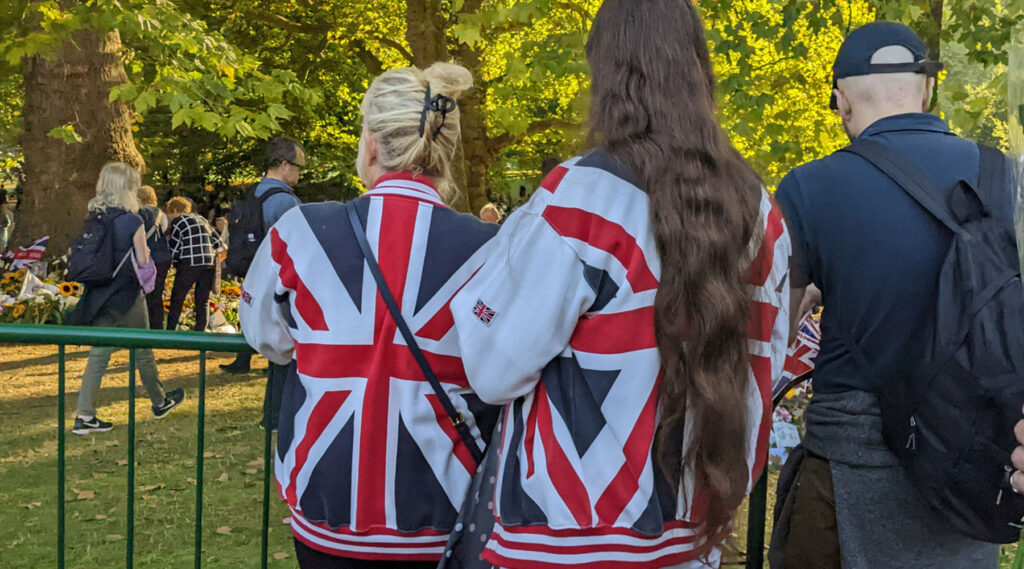 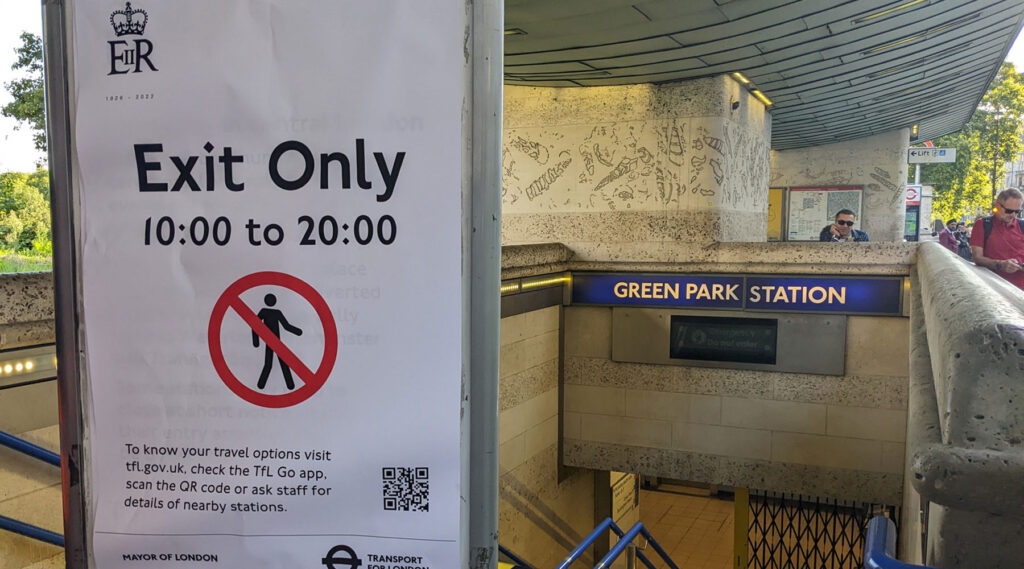 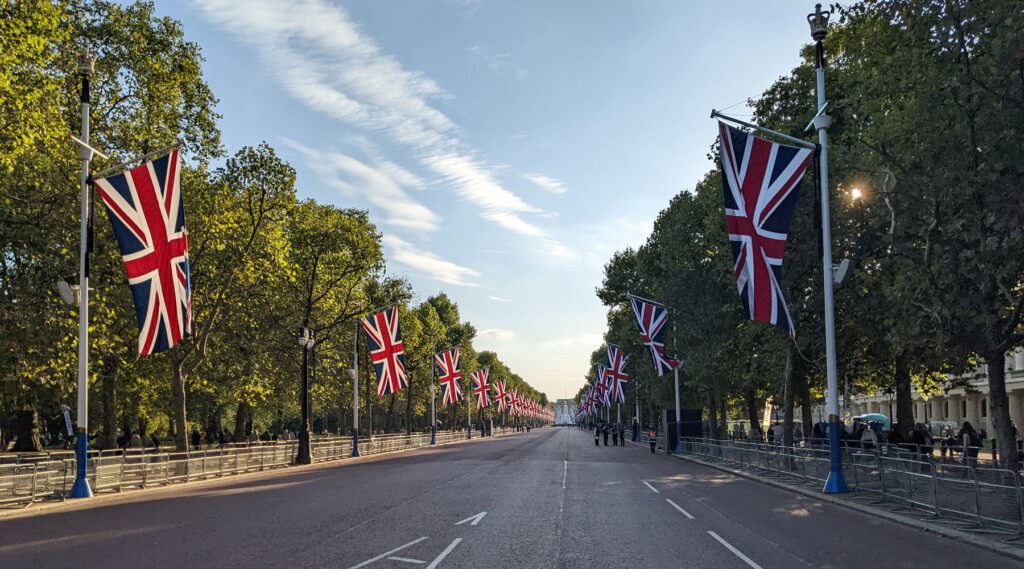 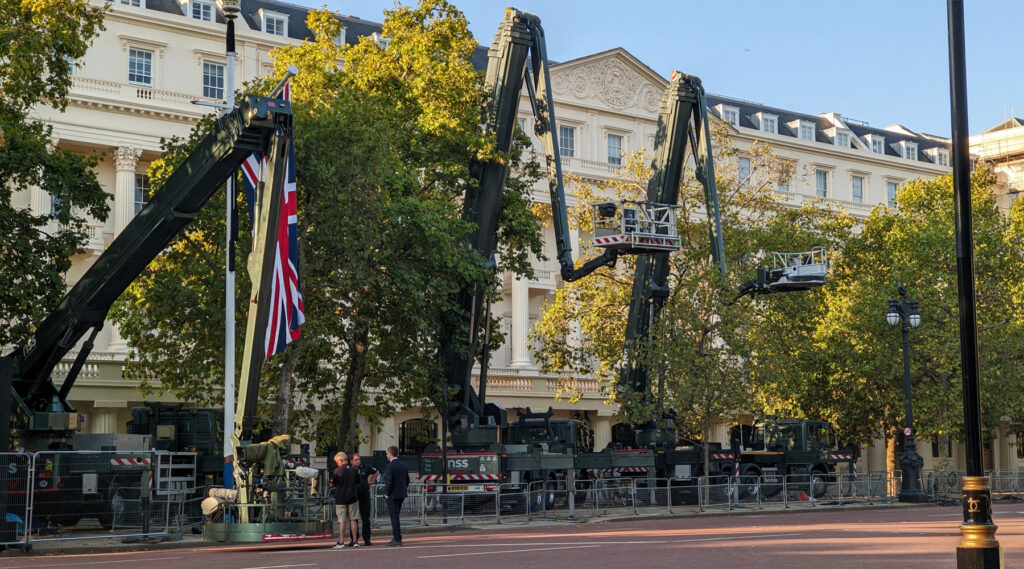 The post Mourning has broken appeared first on ianVisits.

Trump: If elected, will consider pardons for Jan. 6 rioters