Teachbytes
Home Events MUST WATCH: Jack Posobiec SLAMS Biden for ‘the most violent speech in... 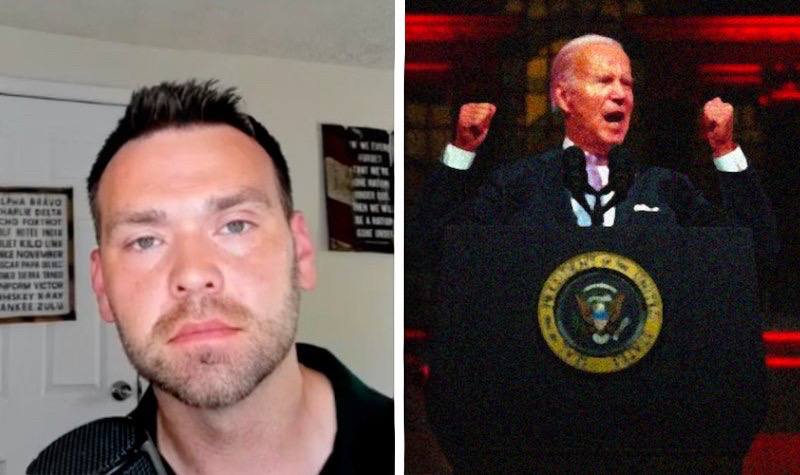 On Thursday, President Joe Biden delivered his so-called “Soul of the Nation” address outside Independence Hall in Philadelphia, Pennsylvania. Instead of hope and unity, however, Biden preached division, repeatedly targeting Donald Trump and “MAGA Republicans.”

In an interview on Steve Bannon’s War Room, Human Events Daily’s Jack Posobiec slammed Biden, bestowing upon him the title of delivering the “most violent speech in American history.”

“He stood there in front of our sacred hall, the hall where the constitution was drawn up, the hall where the founders pledged their lives, their fortunes, and their sacred honor, and he turned around and demonized, and went one step towards criminalizing 74 million Americans.”

Posobiec went on to criticize the administration for its choice of decor, namely the ominous red lights, which he said resembled the “blood red that runs through the streets of Philadelphia every single weekend,” adding that there’s enough “to paint Independence Hall that blood red.”

“Go down to Frackville, go down to Schuylkill Haven, go down to Pine Grove, go down to Fort Indiantown Gap,” he challenged Shapiro, “and tell them that they’re criminals, the people driving around just trying to make ends meet.”

“It’s obvious the Democrats know what’s happening in Pennsylvania,” Bannon chimed in. “That’s why he went there to give that speech; he’s got to change the conversation.”

An Elevated Way to Wear White Jeans for Summer