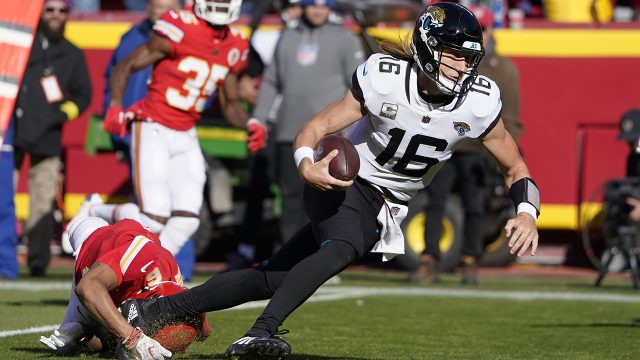 Just when it seemed like the second day of NFL Wild Card action couldn’t possibly top the first, even when the Jacksonville Jaguars were all but inevitable, the second day delivered with nail-biters of its own.

In Orchard Park, the Buffalo Bills were able to give Damar Hamlin a win and move to the divisional round, but the Miami Dolphins surely didn’t make it an easy win.

At U.S. Bank Stadium, the Minnesota Vikings were exposed as one of the more fraudulent teams with a 10-plus win record as the New York Giants got their first playoff win since 2011.

The Cincinnati Bengals and Baltimore Ravens rounded out the night in an AFC North showdown that was a low-scoring affair in the first half, but picked up in the final two quarters coming down to a last-second hail mary.

Here’s a look at all the action from Sunday’s NFL Wild Card action.

The Bills-Dolphins rivalry has made a comeback, which wouldn’t have been known as Buffalo got up 17-0 early, but many expected that against a Dolphins team relying on third-string quarterback Skylar Thompson.

But the Bills played more sloppy than they would have liked and barely squeaked out a 34-31 win after allowing the Dolphins to put up 17 unanswered in the first half to tie the game.

Josh Allen may have had 352 yards passing, 20 rushing yards and three touchdowns, but he also turned the ball over three times, including a scoop-and-score that gave the Dolphins a 24-20 lead in the third quarter.

The Bills answered with 14 unanswered points of their own to lead by 10 with two minutes remaining in the third quarter.

From there, the game continued to go back and forth, even with Buffalo’s star receivers Stefon Diggs and Gabe Davis each recording 100-yard games, including Davis’ game-winning touchdown reception.

Miami still found themselves in a position to win – even when Thompson went just 18 of 45 for a touchdown and two interceptions – as the completions were good enough to find Mike Gesicki when the Dolphins needed or to get downfield 75 so Jeff Wilson Jr. could punch it in.

The Dolphins may have had a different outcome had they managed the clock better, as on fourth-and-1 from their own 48-yard line with 2:28 remaining in the fourth, the Dolphins were handed a delay of game penalty.

From there, an incompletion sealed the game as the ball went back to the Bills who picked up one first down and kneeled out the clock. Let’s give some credit to the Dolphins though, who showed there was no quit in their team despite playing shorthanded against a very good Bills squad.

Before this season, Daniel Jones was one of those quarterbacks who struggled through his first three seasons in the league and didn’t look like a starter, let alone a guy who could lead the Giants to playoff success.

In year four, in the biggest game of the season against a 13-win Minnesota Vikings team, Jones showed exactly how much he has grown as a player as he made history throwing for 301 yards, rumbling for 78 rushing yards and throwing for two scores in a 31-24 win.

Of course, Jones has some help on the ground, with star running back Saquon Barkley making his nine carries for 53 yards on the ground count as he found the end zone twice, but Jones was the one on fire early, going a perfect 5-of-5 for 100 passing yards and a passing touchdown to open the game.

Jones showed patience, arm strength, vision and accuracy in the match, and another first-timer made waves as head coach Brian Daboll coached a near-perfect game to lead the Giants in his first year as head coach.

Of course, the Vikings wouldn’t go down without a fight as they have found a way to pull out come-from-behind wins before. Kirk Cousins went 31-of-39 for 273 yards, two passing touchdowns and a rushing touchdown, overcoming 10-point deficits twice in the game.

But with 1:44 on the play clock and no timeouts left, Cousins also threw a three-yard check down to T.J. Hockenson on fourth-and-8 to turn the ball over on downs and give Jones the win in his first-career playoff game.

The Baltimore Ravens knew they would head into the wild card games without star quarterback Lamar Jackson, but Tyler Huntley has shown exactly why he’s earned the respect and trust of his teammates to be able to continue to win.

As for the Bengals, who lost topped the Ravens 27-16 in the Week 18, wanted to send their AFC North rival packing. But as every game this season against the Ravens showed, it would be a close call.

The Bengals went up 9-0 early and Joe Burrow looked to be championing the team with ease, but the second quarter saw the Ravens score 10 unanswered to take the lead, and even despite having to settle for a field goal the Ravens closed out the half up 10-9.

Burrow found the end zone early in the third and a two-point conversion put the Bengals up once again, but the recurring theme throughout this rivalry is that no lead is ever comfortable between these two.

Late in the third quarter J.K. Dobbins got loose for 26 yards, the longest gain for either team in the game at that point, and Huntley found DeMarcus Robinson on a deep ball two plays later for a 41-yard touchdown pass to tie the game at 17-17, his longest touchdown pass of the season.

But just as the Ravens were about to take the lead on third and goal early in the fourth, Huntley fumbled the ball on a quarterback sneak and instead a 98-yard fumble return by Sam Hubbard put the Bengals right back on top 24-17 with a game-altering play.

Both teams struggled with drops, bad plays and losing yards, leading to multiple three-and-outs without an offensive score throughout the final quarter. The game came down to the Ravens having the ball on fourth and 20 with eight seconds left to play.

Their season came to an end on a Hail Mary from Huntley that was just slightly missed by James Proche and the Bengals survived despite Burrow going just 23-of-32 for 209 yards and one passing touchdown. Huntley went 17-of-29 for 226 yards, two touchdowns and an interception in the loss.

‘What did we just see?’: Hubbard fumble return turns Wild Card game on its head

Stranger Approaches Kids at Their Deserted Lemonade Stand – Their Mom...