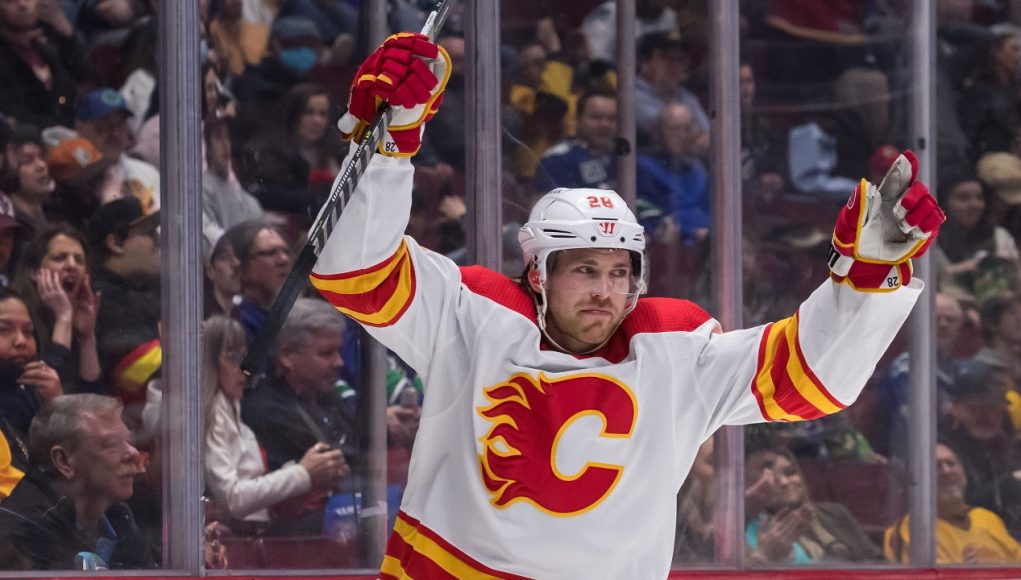 Tyler Toffoli stood in disbelief, flexing his stick over his helmet as if he was considering snapping it in half.

His club on the power play in a 1-1 game, he’d just misfired from in close on a wide-open net.

In the same period, Andrew Mangiapane was guilty of an even more egregious miss, sending a rebound off the side of the net.

And there, in a nutshell, is why the Calgary Flames are returning home, losers of seven in a row.

This club simply can’t finish with the big boys.


Streaming Home of the Calgary Flames. Stream games all season long, plus hundreds of other NHL games, the All-Star Game and Stanley Cup Playoffs. SN NOW STANDARD and PREMIUM let you choose how much hockey you want to watch.
CHOOSE PLAN

There was never any question the Flames would have a harder time scoring goals without Matthew Tkachuk and Johnny Gaudreau, but the delay in finding any hint of chemistry or finish like they had last year is why the club returns home 5-6-2.

Few can argue with how well the team played in its three-game jaunt through Long Island, Jersey and Boston on Thursday, where the east-leading Bruins have been perfect.

Against those three solid clubs the desperate Flames came out sharp, collectively outshooting their opponents 24-4 in the opening 10 minutes of those games.

In all three they held a lead, much like they did five minutes in when Noah Hanifin opened the game’s scoring in Beantown.

Alas, getting the lead has not been a problem for the Flames.

Preserving one is the issue.

They’ve blown leads in seven of their eight losses, which has included some bad goaltending lapses, defensive gaffes, bad penalties and deadly giveaways.

But what could have ended this skid was finishing the type of opportunities Toffoli and Mangiapane squandered Thursday.

“You look at tonight, Boston’s a real high-scoring team but their goals are just grease goals, right? When you don’t have that type of player, so you’ve got to play that greasy game. It’s pretty simple.”

Right now, the Flames don’t have that type of player.

As good as Nazem Kadri has been, they don’t have enough people who feel good enough about their game to finish with the game on the line.

With Jonathan Huberdeau struggling and now injured, Elias Lindholm and Mangiapane struggling with new linemates, and Gaudreau and Tkachuk gone, it’s not a dangerous looking offence at all.

General manager Brad Treliving said before the season opener, he was still looking for scoring help.

The search has likely intensified given the team’s fate of late, as well as the fact they sit tied for 25th in goals scored.

Still, it shouldn’t be coming to this, as the club was supposed to be built to win low-scoring games.

Here’s the most fascinating part of this unlikely journey one month into the season: the Flames pieced together a solid road trip.

They started well, grabbed the lead, outshot their opponents, threw their weight around and clearly deserved a better fate than one of a possible six points.

“Quite frankly, this whole trip, I don’t have an issue with any of it,” said Sutter, whose club was unable to come back after Charlie McAvoy’s point blast through traffic put the hosts up 2-1 just as a Bruins power play ended late in the second.

“We played our butts off, quite honestly, and didn’t get much out of it.

“We know there were two or three games at home in that stretch that the team didn’t play very good, but the last four games in a row we’ve played really, really good.

“Just not getting the result.”


Jeff Marek and Elliotte Friedman know their hockey. Whether it’s the pros or juniors, they are always plugged in to the latest news, rumours and stories that you should know from around the game.
Link and subscribe for free
Marek on Twitter
Friedman on Twitter

As Sutter added, the last four games can be summed up with, “not giving up much and can’t score the goal.”

Dan Vladar got the start, made 25 saves and can’t be blamed for either goal, including the rebound Connor Clifton collected on the doorstep to tie the game late in the first.

The power play, which has been using Adam Ruzicka on the top unit in lieu of the hobbled Huberdeau, was 0-for-6 on a night the Flames sent 32 shots towards Linus Ullmark.

The Flames deserved better on this trip, especially considering how well they’ve played without Huberdeau, Chris Tanev and Michael Stone in the lineup.

They certainly played better out east than they did their last three games at home.

“You’d rather be angry than frustrated — that’s a way better emotion,” said Sutter, who is now one loss away from tying his longest losing skid as a coach – an eight-gamer with Chicago in 1994-95

“I think our effort is there, we’ve just got to start bearing down on some of our chances and staying out of the box,” added Mangiapane, who is now scoreless in eight straight.

“There were points in the game where I feel we were dominating and creating scoring chances and doing well in the d-zone and breaking out as five.

“One or two mistakes, and they end up in the back of our net, or cause a penalty.

“You’ve just got to clean up those mistakes, and I think we’ll be OK.”