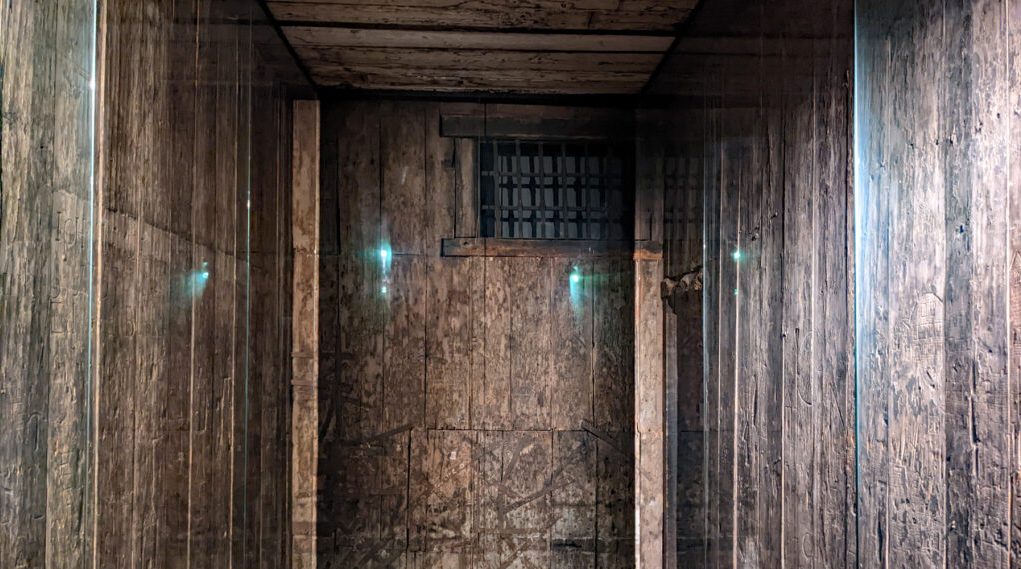 In just 7 days time, the Museum of London will close the doors of its current home for the final time as it prepares to move to its new home in Smithfield.

A museum like this will always have nooks and crannies, things people like or are uninterested in, especially one that tries to cover London’s long deep history. There are a few bits of the old museum I’ve never quite got, such as the pleasure garden display.

But here are ten of my personal favourites.

You have until 5pm on Sunday 4th December to visit – and the museum will be open all night during its final weekend as part of its farewell, so if you fancy visiting at 3am on Sunday morning, you can.

This is a small wooden prison cell from a house of detention close to the Tower of London, and really worth visiting to look at the huge amount of graffiti that’s been carved into the walls over the centuries. I’ve always preferred this to the more famous art deco lift from Selfridges that’s nearby and the contrast between wealth and poverty is striking. They should sit beside each other. 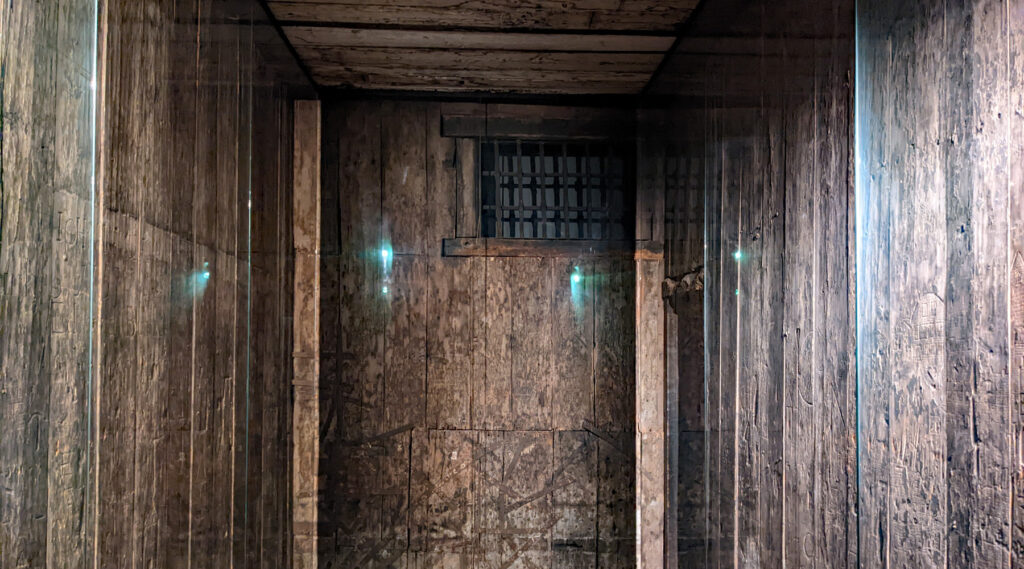 A cluster of narrow passages lined with replica shops pubs and tailors. It’s a dark space and very evocative of the many movies and TV shows set in Victorian London’s streets which are invariable dark, foggy and narrow. The museum just needed a fog machine to complete the picture. 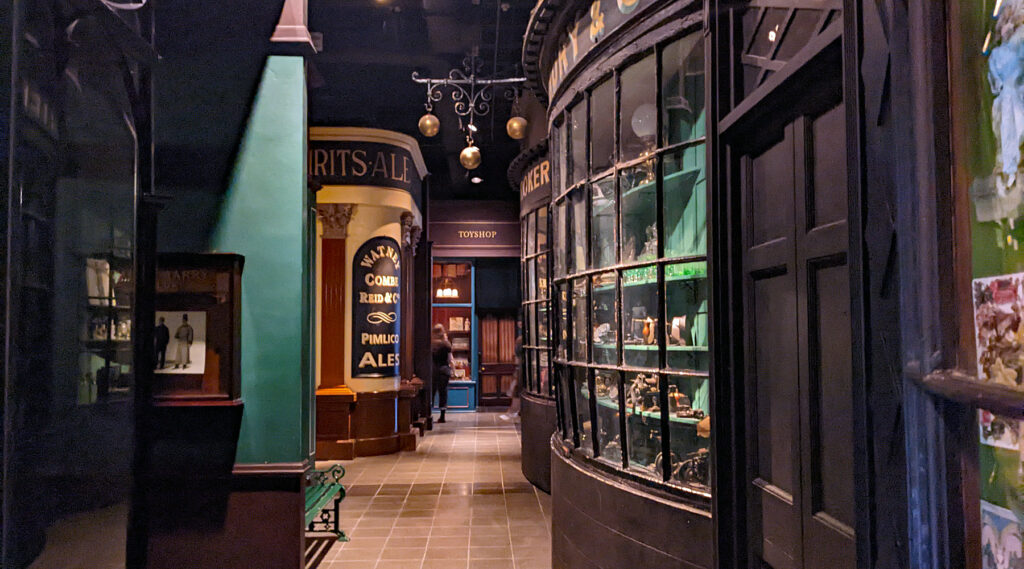 This is very well hidden in a corner, and is a model of a typical London Underground railway, with platforms, an underground ticket office, tunnels, and also the street scene above. 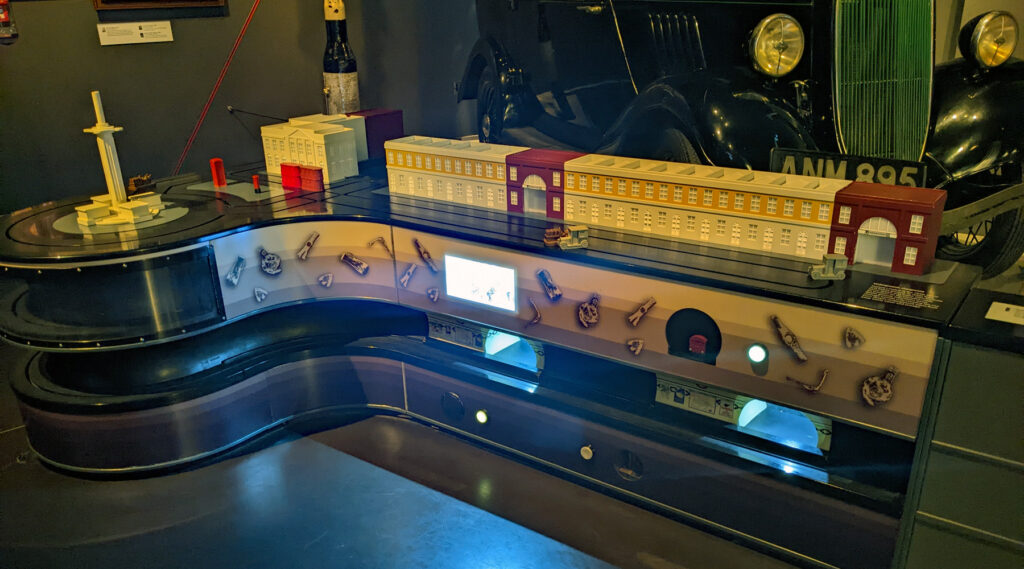 This is something that’s so easy to miss, being by the stairs leading from the upper to lower floors, but off to one side that it can be described as literally overlooked by most people. It’s made from Coade, an artificial stone invented in Lambeth and was installed on the insurance company’s offices in the City of London in 1797. 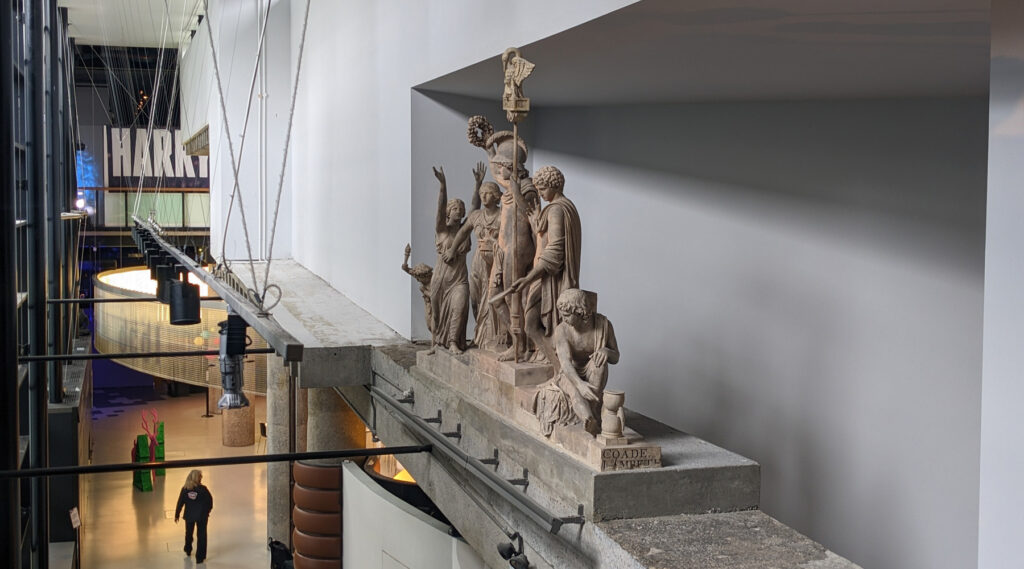 One of the museum’s newer exhibits, is the moving cauldron from the London 2012 Olympics, in its own room. The exhibition is a lot more than just the main object though, as there’s a video talking through how it was designed, and lots of models of the early petal designs.

It’s also a reminder of the optimism that swept London on summer long before pandemics, wars and recessions took away the smile. 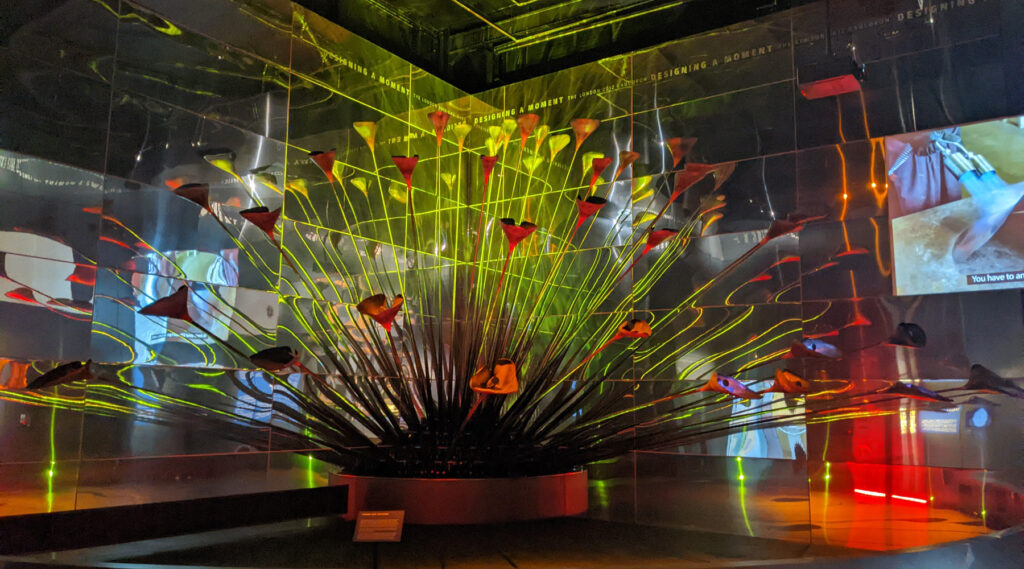 6] The Fire of London Plaque

This cracked stone is easy to miss in the museum, but is important – it marks the spot where the Great Fire of London started, but is an example of the prejudices of the time as it blames Catholics for starting the fire. 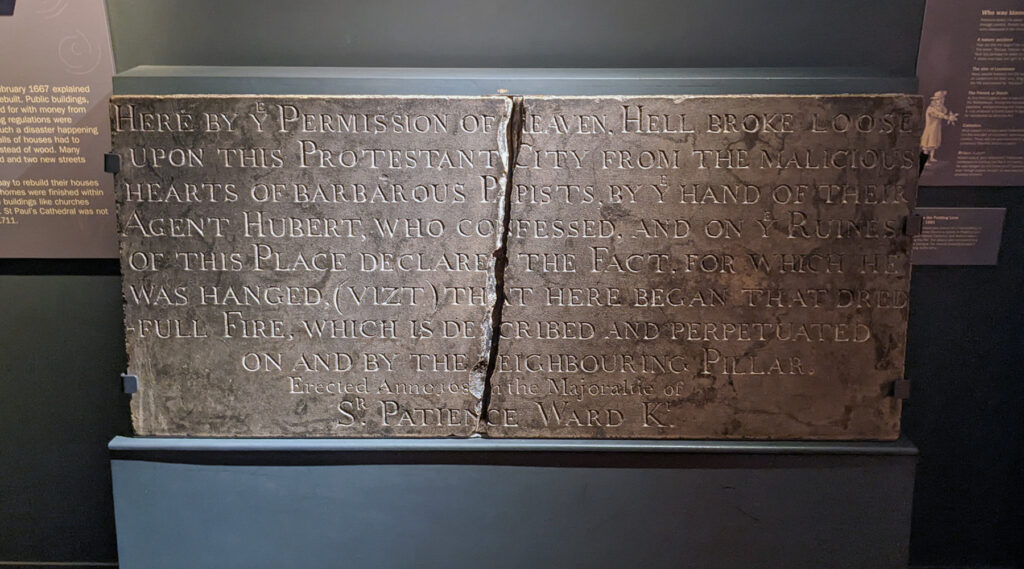 As you go into the museum the first gallery is of London before London, the prehistoric era and amongst the dead animal skulls and pot shards, are walls of glass cases filled with stone and iron age implements.

I’ve always liked this simple display as it strongly reminds me of a display of kitchen knives in an upmarket retailer — and these were the kitchen knives of their time. 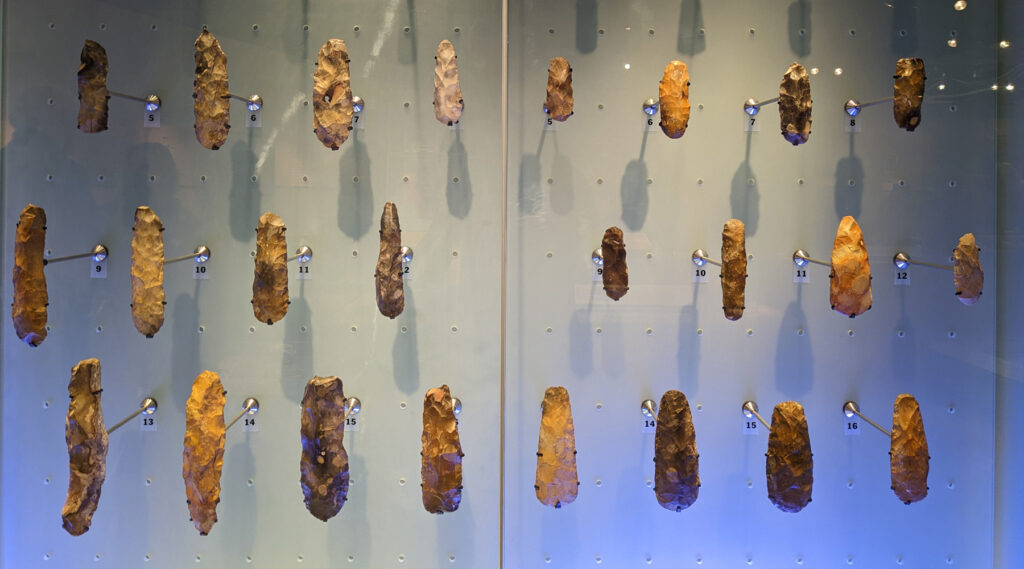 There’s a large window next to the Roman display in the museum that lets you look down at the remnant of Roman wall that’s just outside the museum.

Whisper it quietly, but most of what you’re looking at is medieval. But don’t tell anyone I told you that, as it looks impressive and being next to the museum gives the museum a sense of place and belonging, as it’s right next to the history it shows off inside. 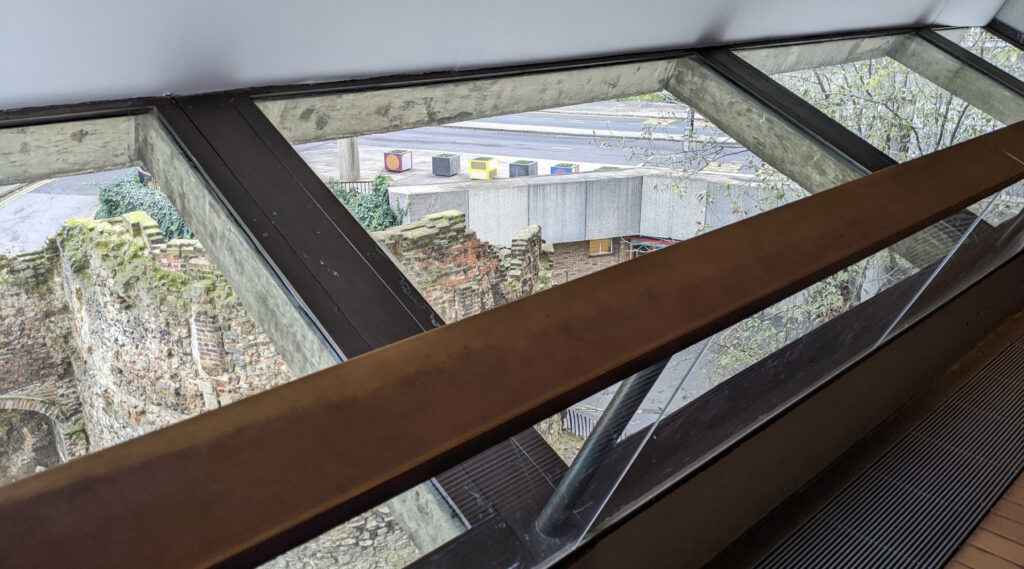 A huge model of the old St Paul’s Cathedral with its spire still intact. The old cathedral was taller and longer than the one we have today, so just imagine how large it would be been on the skyline.

This is not just a fancy model, it’s remarkably accurate – down to a small but important door that I had heard rumours of, but dismissed until I read recently that it’s true, and is even in the model, if you know where to look. 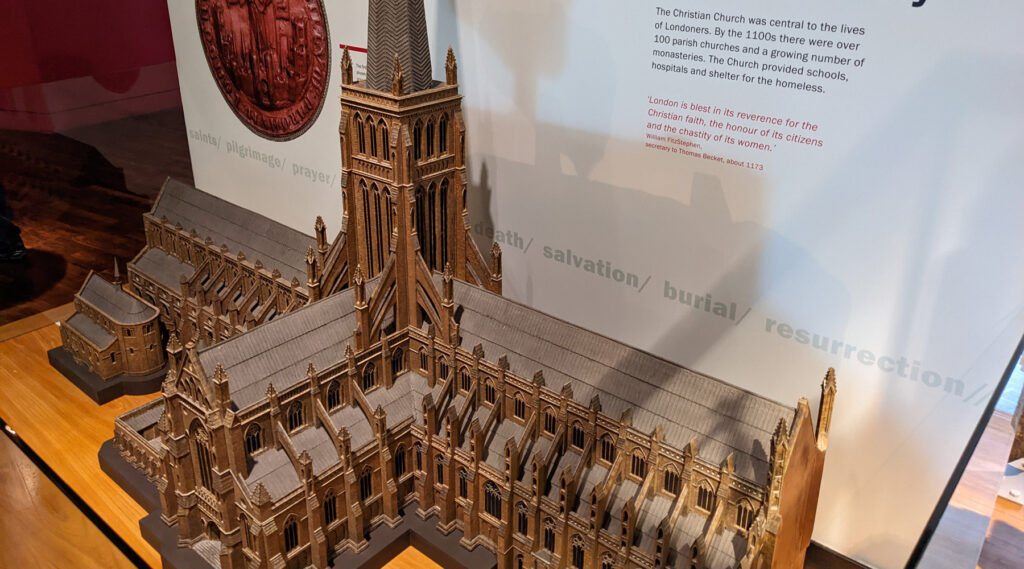 I love things that are in plain sight but often missed until pointed out, and do take a look at the handrails around the ground floor of the museum — they’re a timeline of London with key events added in.

I’d probably been going to the museum for a decade before I noticed them. 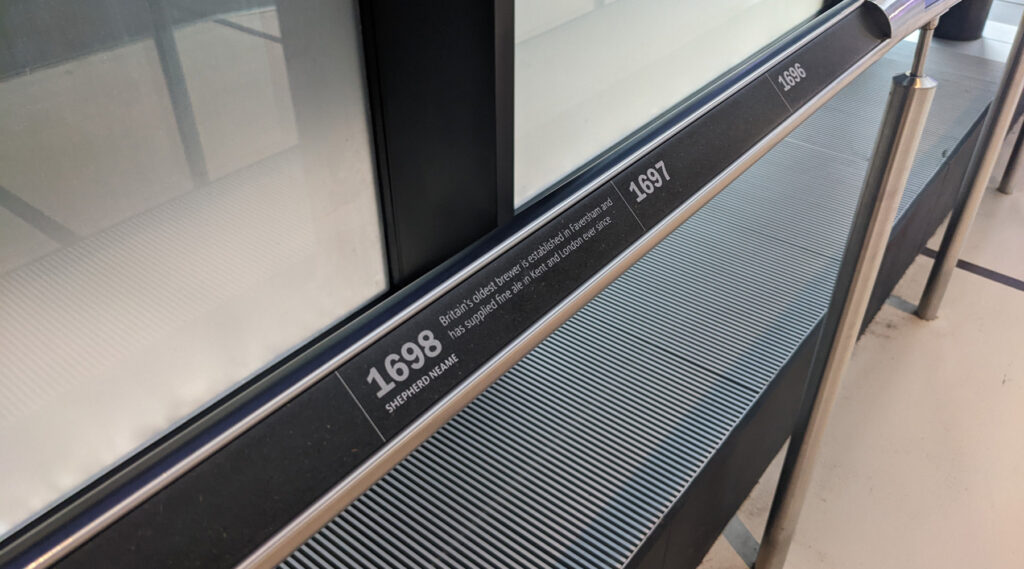 The packing is about to start – you have a week to visit. 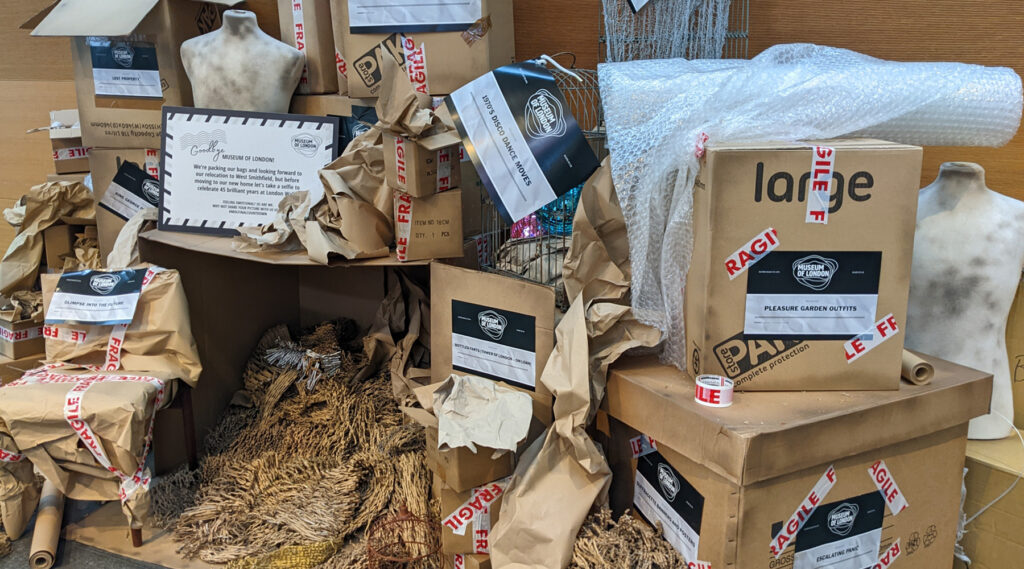 The post One week left to visit the Museum of London appeared first on ianVisits.

British tourist 45, is killed in speedboat crash near Turkish resort

Update Your Everyday Basics With a Cool Blue Shirt