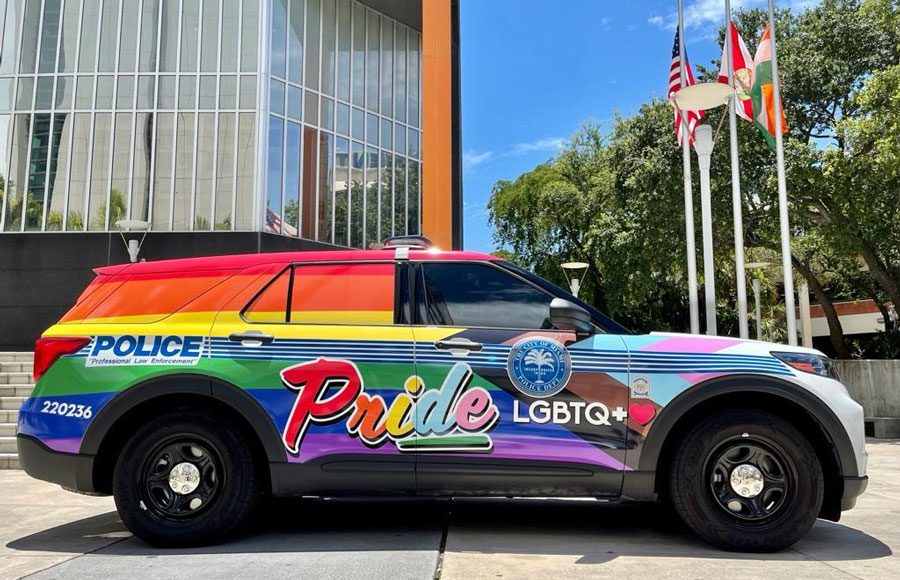 PORTSMOUTH, OH –  No, it’s not for a parade – it’s used while the police are on duty. And it looks like a big hokey-pokey-jokey-wokey car.

Why would any public servant believe for one second that it’s professional, ethical, and wise to uphold one group over another group in our land of liberty? No cop car in any state in the entire United States should have any hand-picked group’s advertising, slogan, message, special colors, pictures, or phrases on vehicles supported by taxpayer dollars. I don’t care if law enforcement wants to plaster a photo of a heterosexual gray-haired bingo-challenged granny on their patrol car – no, no, no.

This isn’t a LGBTQ issue at all – any person with common sense would agree. This is me cringing with a hint of a headache because this not a gay or a straight issue. It’s really not.

Florida Foundation journalist Jonas Vesterberg recently reported, “The Miami Police Department is conducting law enforcement activities in a vehicle wrapped in rainbow colors plus “Pride” and “LGBTQ+” messaging – which has caused some residents to question whether they will be treated equally under the law.”

Ya think? Who thought this would be a trust-building idea for the entire population in Miami or the entire county? Oh, the Woke Herbie Love Bug VW is only to make an elite group feel more comfortable and not all the residents. It’s a moronic idea.

The cruiser, in use since June 2021, is piloted by Miami PD’s LGBTQ+ liaison officer, as noted by Vesterberg. So, a gay officer gets special treatment with a special vehicle.

I don’t care if the rainbow cop car is piloted by the Pope or an automated self-driving service. It’s just downright wrong to elevate one group over another group by law enforcement.

Who was the decider?

The wrap was donated by a private citizen – Enrique Santos – a Miami radio personality and the President and Chief Creative Officer of iHeart Latino, according to Vesterberg’s article.

What if the wrap was donated? It’s still plastered on a police vehicle. So, what if an airwave celebrity is involved?

According to Fox News, the Miami Police Department claims the decorated cop car “is a show of solidarity for the LGBTQ+ community.”

A cop car should never be a rolling billboard to support civil rights, politics, ethnicities, culture, religion, fried chicken or a heterosexual gray-haired grandma – no special slogans and no advancing agendas for law enforcement.

Surely, Reberkenny won’t spiral down the rabbit hole and connect the clown car to gender-affirming health care and children that identity as trans when parents oppose.

Journalist Joseph did a swan dive right into the abyss. Thud.

Guess what? I asked a few of my gay friends about the hokey-pokey-jokey-wokey car. And they agreed with me. Are my gay friends homophobes? Or gay traitors? Or policephobics?

Read what Republican Anthony Sabatini tweeted prior to leaving office.

But, is the police department’s use of LGBTQ message on a cop car unconstitutional?

Hmmm. Ponder on that question.

“The government has the right to engage in what’s called ‘government speech’ under the First Amendment – which means that the government can promote certain agendas in order to try to convince and persuade people,” Dr. Lidsky explained.

I perused the American Bar website. “Under Supreme Court First Amendment precedent, government speech is a relatively simple doctrine. In short, government can say whatever it wants. (In other words, the Free Speech Clause does not restrict government speech.)”

The hokey-pokey-jokey-wokey car is not breaking the law and is not unconstitutional – but it’s still a moronic idea.

I just chatted with a clique of heterosexual gray-haired grannies at the local doughnut eatery and they want to petition the Miami Police for a granny-mobile. They insisted that cotton granny panties be glued to the doors and hood because they want grandma bloomers to make a comeback. The ole’ ladies are so tired of granny panty discrimination in America.

5 things to know this Tuesday, December 6

The death of an American attorney at a Mexico hotel did...

Missouri Republican US Senator Josh Hawley, Who Was Filmed Running In...