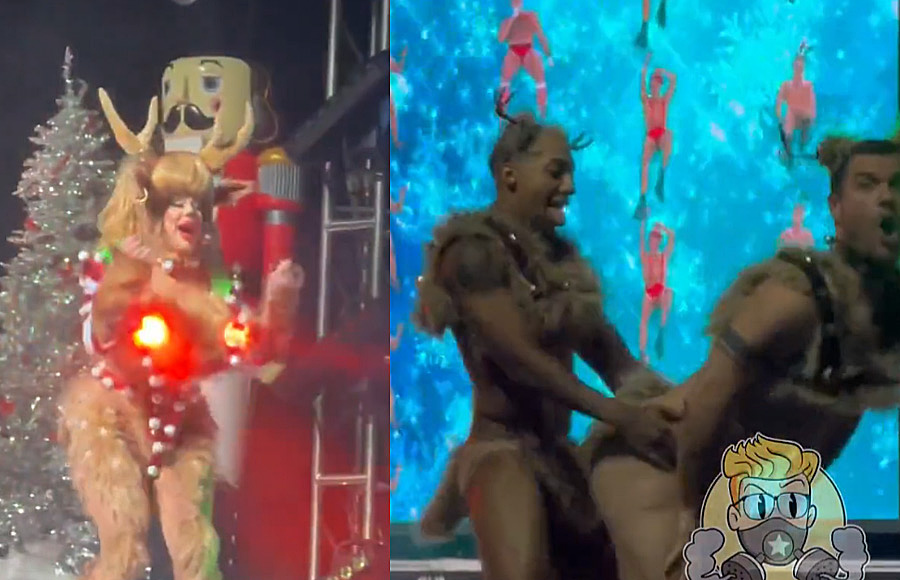 PORTSMOUTH, OH –  Applause for Gov. Ron DeSantis and his administration as they stand up to protect children from watching the twerking and jerking of adult men wearing women’s clothing, wacky wigs, and caked on makeup (aka drag queens). “A Drag Queen Christmas,” is a holiday-themed drag show that tours across the country, featuring alumni from the reality series “RuPaul’s Drag Race.”

What sane and sensible adult agrees with grown men simulating sex acts in front of kids? Oh, just label the perverts as drag queens and the sexualization of children is considered a fun fantasy. Uh-huh. On what planet is the grooming and sexualization of innocent children promoted as a legal right? Planet Sicko.

There’s no such thing as a “family friendly” drag queen show proclaims the Epoch Times.

Defenders and protectors of children would agree.

The Department of Business and Professional Regulation (DBPR) recently sent a letter to The Orlando Philharmonic Plaza Foundation due to reports of minors attending “A Drag Queen Christmas.” show.

Read the letter in its entirety.

The Department has reason to believe that this drag show is of a sexual nature, involving the exposure or exhibition of sexual organs, simulated sexual activity, and/or the sexualization of children’s stories. The Department has also become aware that drag shows by Drag Fans have been marketed to and attended by minors, including young children.

Applause for Melanie S. Griffin, the Secretary of Business and Professional Regulation.

Thumbs down for Eskamani.

So, another politician giving a pass to child predators. What kind of a society supports and upholds the sexualization of children? A sick society.

Regardless, Eskamani said it should be parents, not the DBPR, who decide whether drag performances pose a threat to their own children.

Since when do parents have the right to allow their children to witness sexually explicit adult entertainment by men dancing and prancing in thongs and pasties as they simulate sexual acts?

News Channel 8 reached out to the Broward Center of the Arts for comment.

“Please note that admission to Drag Queen Christmas on December 26 at the Broward Center was limited to patrons 18 years or older, unless accompanied by a parent. To ensure patrons were aware of the adult themes and content in the show, this information was on the website and ticket purchase page; all ticket buyers were also informed directly through a “Know Before You Go” email, a customer communication that is sent out in advance of most shows,” the center’s media department said in a statement.

Chris Nelson, a local activist, recorded a video in Fort Lauderdale, Florida, at the event where he claimed several young children were present.

The show was first outed by Taylor Hansen when he caught many of the acts on video and posted them to social media. The images of the event on his Twitter feed told the story of the “Drag Queen Christmas,” which is promoted to “All ages.”

Applause for Nelson and Hansen for defending children from child predators.

Kids don’t belong in bars, strip clubs, or adult entertainment venues. And any adult that condones children stuffing dollars in the thongs or any clothing worn by men (aka heterosexual, homosexual, bisexual, transsexual drag queens) is a disturbed individual – and that includes any parent.

Furthermore, the U.S. Department of State is funding drag shows in Ecuador with taxpayer money in order to promote “diversity and inclusion,” according to a report from Fox News.

“The State Department awarded a $20,600 grant on Sept. 23 to the Centro Ecuatoriano Norteamericano Abraham Lincoln (CENA) in Cuenca, Ecuador, a non-profit organization supported by the U.S. Embassy and Consulate in Ecuador, to “promote diversity and inclusion” in the region.”

According to the CDC, Child sexual abuse is a significant public health problem and an adverse childhood experience (ACE). Child sexual abuse refers to the involvement of a child (person less than 18 years old) in sexual activity that violates the laws or social taboos of society and that he/she:

Lights come back on in North Carolina county as police search...