Teachbytes
Home News Opinion: Whose Child Will Be Killed on a Stroad? 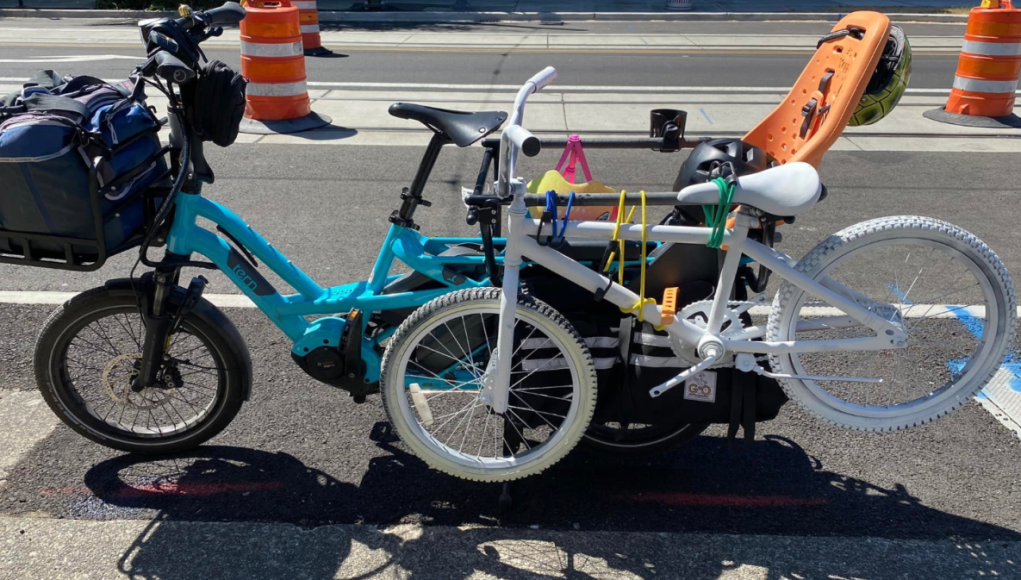 This article first appeared in Strong Towns and is republished with permission.

In the picture below, I am standing next to Amber Weilert, whose 13-year-old son Michael was struck and killed in a crosswalk on Pacific Avenue South in Tacoma, Wash. A hundred people were gathered to ride silently and install a memorial ghost bike where her son died.

Pacific Avenue South is also known as State Route 7: two lanes in each direction and a center turn lane; signs with a suggested speed of 35 mph; many driveways and intersections, sidewalks, crosswalks, bike lanes, and bus stops. SR 7 looks like a place where cars can go fast—and they do, between red lights. Because of the fast-moving cars, the sidewalks, crosswalks, and bike lanes do not make SR 7 comfortable, or even safe, for those outside of cars. Anyone familiar with Strong Towns knows that I just described what recovering engineer Charles Marohn has dubbed a “stroad.”

I ride a bike for recreation and transportation and have many friends who do the same. My son commuted to his high school by bike and also used his bike to get around—just like Amber Weilert’s son. When these fatal or life-changing collisions happen to people who ride bikes in our community, there’s a tendency to think, “Could have been me…or my kid.” However, spending time in the Weilerts’ neighborhood, I couldn’t help but notice some stark contrasts between their travel routes and ours; ones that make theirs more perilous.

The small city where I live also has a state route running through it: Highway 16. Highway 16 is not a stroad, but rather, a limited access highway, what Marohn and Strong Towns would call “a road.” When highway building was all the rage, Tacoma was still very small and the highway was not run through the middle of it, but instead put out on the edge. The town grew around it. At first, the intersections at Highway 16 were level crossings, but after many serious collisions, the level crossings were replaced by overpasses with standard highway on and off ramps. There are two remaining driveways in our city that lead directly to the highway with right turns only: one to a business park and the other to the cemetery. These two driveways will eventually be replaced by a less hazardous way to access them by motor vehicle.

For my family’s commutes outside of cars, we have a shared-use trail along a powerline easement: a very nice, tree-lined one, 16 feet wide in most places, running parallel to, and never crossing, Highway 16.

Our state department of transportation may see no differences between Highway 16 and SR 7. They are both designated “State Routes”—a number inside the profile of George Washington on our road signs. But on the ground, they couldn’t be more different. It’s true that many of the driveways onto SR 7 lead to car-oriented uses—dealerships, tire centers, car washes—and that all the businesses have big parking lots. It’s also true that many driveways lead to things that are essential to neighborhoods—grocery stores, churches, coffee shops, restaurants, convenience stores, delis, a library, and a bowling alley—places people who live in the neighborhood, particularly those that don’t drive, might want to go to on foot or by bike. By designing Pacific Avenue South, a street within a neighborhood, to also function as State Route 7, a highway that moves lots of cars quickly between destinations, our transportation planners have put people who live there and would like to move independently within their neighborhoods—people like Michael Weilert—in danger.

In 2020, the bicycle club that I am a member of and volunteer for updated its Mission, Vision, and Values statement. At the time, I was critical that the word “equity,” or some version of it, appears six times in the statement, and I challenged the writers to define what they mean, rather than overusing this buzzword. But standing next to Amber Weilert and thinking about her son and about my son, her neighborhood and my neighborhood, it occurred to me how very unfair—how inequitable—it was that her neighborhood was designed to allow cars to speed through and put her child at risk. And yes, some upper-class areas also have bad intersections and streets where cars are moving too fast, and where they can readily come into conflict with each other or with people outside of a vehicle. But as a rule, it is more likely to be places where poorer people live that attempting to travel outside of a motor vehicle will get you killed.

Michael Weilert’s death sparked a grassroots campaign to make the city and our county make good on its “vision zero” goals. I will admit that when I first heard of this fatal collision, I was angry that the driver, who in this case failed to stop at a marked crosswalk with flashing beacon lights, was not charged at the scene. Upon further reflection, this driver, who is undoubtedly already suffering emotional anguish because of the crash, is also a victim of lethal design choices. Someone, more likely a group of professionals, decided that a painted crosswalk and flashing beacons could be relied upon to stop multiple lanes of cars going at nearly highway speeds. When we talk about “vision zero,” we need to be asking for more than mere enforcement of traffic laws. We need to demand that the problem that Strong Towns has identified—the unsafe design choices inherent to stroads—be solved with the solution Strong Towns has proposed: If the roadway is being used as a street—a platform for local destinations—then it needs to be designed as a place for people, not a place to move cars quickly through.

Those in our government, at both the state and federal levels, have also started to use the word “equity” when talking about transportation. Before spending time in Michael Weilert’s neighborhood, with people who mourned his loss, I did not understand the connection. Now, I do. We can’t keep using the places that poor people live in as highways for wealthier people to move through quickly. It’s inequitable to have a state route in the middle of Michael Weilert’s neighborhood. Redesign it as a street.

Marlene Druker is an architect who commutes, mostly by bike, to work in Tacoma, Wash. She is the wife of a third-generation Gig Harbor commercial fisherman and mother to two university students.

Police Officer Feels Uneasy After Talking to Teen Running on the...