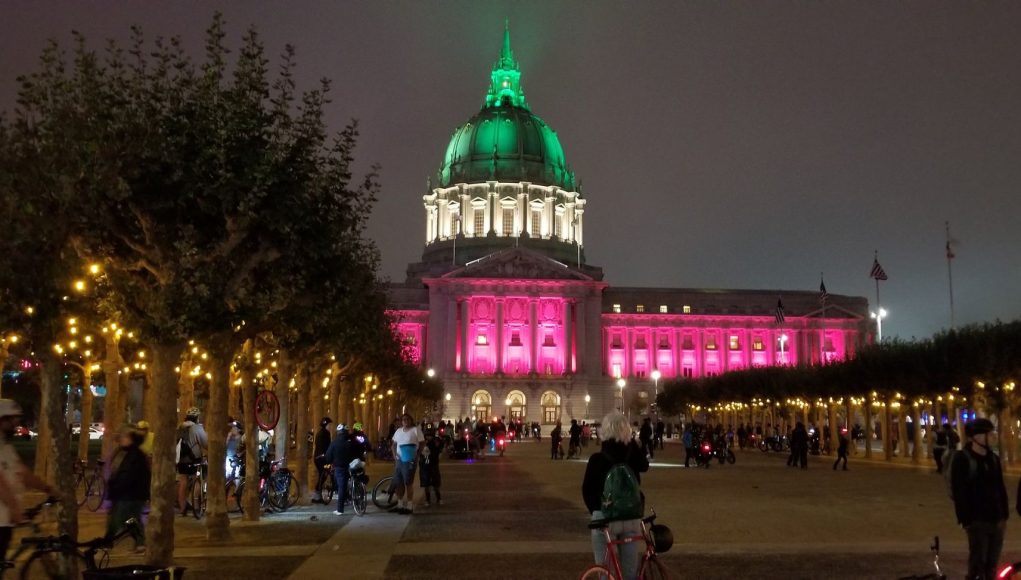 On Thursday, cyclists began gearing up for the 30th anniversary of Critical Mass — a controversial rally that’s been held on the last Friday of every month since 1992. And yesterday, hundreds descended on SF streets to make a case for a more cycling-friendly city.

At its height, Critical Mass attracted thousands of attendees for each of its monthly meetups, which were infamous for causing traffic jams and headaches for commuters…. who traveled by automotive means. Though the event has evolved and tempered over time, yesterday’s turnout was much like those of years past; the tone of the event, too, was different than recent iterations.

“That change has led to the visibility of biking and that has led to biking as something that is important to San Francisco,” Janice Li, former advocacy director with San Francisco Bicycle Coalition, told KTVU. “In my opinion, it makes San Francisco a better place to have more people biking.”

The idea, which was born in San Francisco now 30 years ago, has since inspired like-minded rides across the country, as well as all over the world. The general feeling for this year’s anniversary ride was it wasn’t about nostalgia, but rather a rallying for a safer, more car-free San Francisco — a vision of the city that we’ve been able to see through sliding doors as Slow Street Program corridors debuted across SF, as a response to the pandemic.

Those expressions of “freedom” and “belonging” should carry over to pedestrians — and they shouldn’t feel like they’re rolling the dice with their lives commuting to work on their bicycles.

In case you were among the riders in yesterday’s anniversary ride, scroll through some of our favorite photos (and videos!) uploaded to Twitter of the rally.

30 years of monthly Critical Mass rides in San Francisco. Thanks to all of the riders that have kept this going! ❤️‍🔥❤️‍🔥❤️‍🔥 pic.twitter.com/m7veb5VCLJ

What a ride yesterday #CriticalMass!
The ride got a little funky, and the drivers were unhinged, but we had a good time! 👏🏼 pic.twitter.com/eGTMLzxvxe

Bicycles pack in too efficiently to convey it, Critical Mass was huge tonight pic.twitter.com/prLNscbPtO

My first critical mass on the 30th anniversary was 🔥 pic.twitter.com/oUOutSNlLX

Related: Critical Mass Gears Up for Its 30th Anniversary Ride Friday, After Decades of Adjusting the Resistance