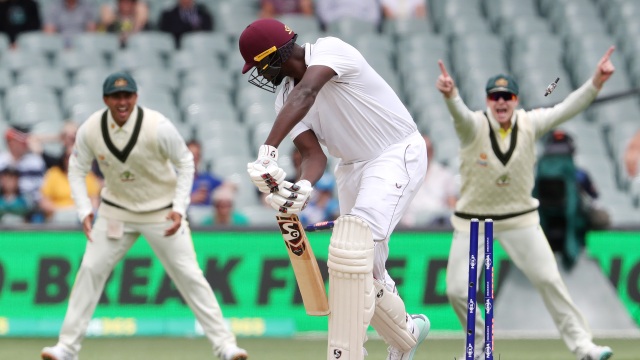 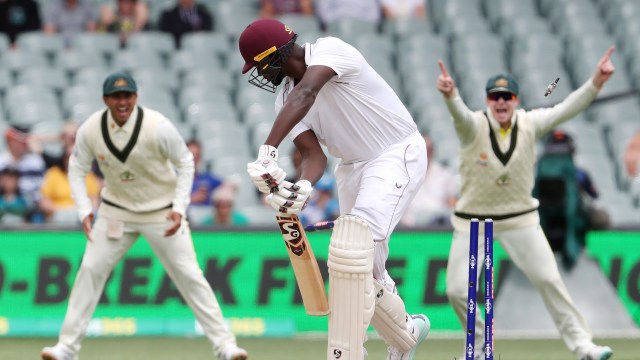 Pink-ball king Mitchell Starc has helped bowl Australia to a comprehensive 419-run win over the West Indies at Adelaide Oval, wrapping up a 2-0 series sweep of the Frank Worrell Trophy.

Chasing 497 for victory, the Windies could only muster a fourth-innings total of 77 before being bowled out early on day four in the second Test.

Mitchell Starc claimed two wickets on Sunday to go with his one from Saturday night, finishing with figures of 3-29 and maintaining his status as the best with the pink ball in hand.

Nathan Lyon picked up another to become the third Australian to claim 450 Test scalps, after Scott Boland’s triple-wicket maiden over on Saturday night started the Windies’ demise.

Starc continued the rot on Sunday when he had Devon Thomas caught behind for 12 in the third over of the day, before adding to Jason Holder’s woes when he uprooted his off-stump.

The ball to remove Holder was classic Starc, swinging back through the gap between bat and pad at 142km/h.

Alex Carey provided the other highlights, with two superb catches up to the stumps off Michael Neser (3-22) to remove Roston Chase and Joshua da Silva.

And by the time he took another one-hander standing back off Neser to have Marquino Mindley for a duck, the job was done.

The win is Australia’s biggest-ever runs victory over the West Indies, and the team’s third-highest of all-time against any side.

Starc will also now start the Brisbane Test against South Africa on the verge of 300 Test wickets, with his Adelaide haul taking his total to 296.

But Australia is aware a stronger challenge awaits against the Proteas.

The South Africans are one of only two touring teams to win three straight series in Australia, after crushing Steve Smith’s men at home in 2016-17.

Their batting remains the bigger question mark, but in Lungi Ngidi, Anrich Nortje and Kagiso Rabada they have a particularly threatening pace trio.

“They present a really good challenge for us, they’re a very good side,” stand-in captain Steve Smith said.

“Particularly their fast-bowling stocks are very strong and we need to be at our best to compete.”

They will almost certainly bring more than a West Indies team that has lacked fitness, form and any real intensity.

Australia’s domination of the series has included Australia piling on 1490 runs for the loss of just 19 wickets, while claiming all 40 of the Windies’ scalps for 907.

Three Australians averaged more than 100 with the bat with Marnus Labuschagne and Travis Head’s first-innings centuries in Adelaide coming after the pair, along with Smith, dominated in the first Test in Perth.

“Our boys batted particularly well the first day (in Adelaide) … and the bowlers did the job like they have done so many times for us in these pink-ball games,” Smith said.

That is in contrast to a West Indies side that had five bowlers average at worse than 100.

It helped extend Australia’s grip on the once-prestigious Frank Worrell Trophy to 27 years, with the two teams to meet again for two more Tests next summer.

Exclusive discounts on Back to the Future musical tickets from £20