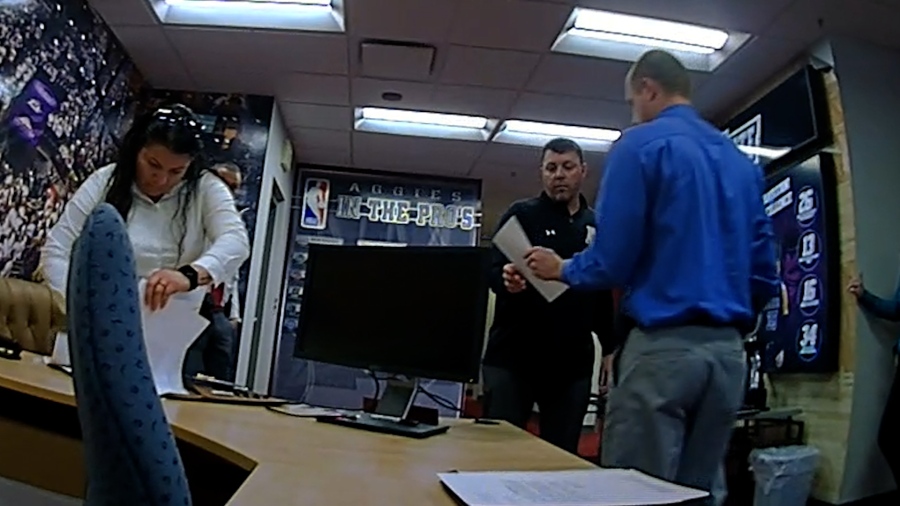 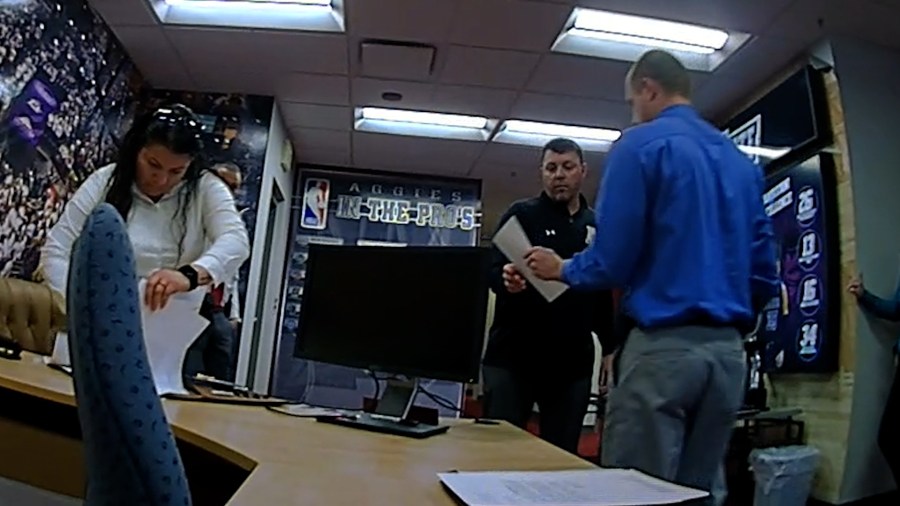 LAS CRUCES, N.M. (KTSM) – On the morning of New Mexico State men’s basketball’s game against UTEP in the Battle of I-10 in Las Cruces on Nov. 30, State Police went to the Pan American Center to serve search warrants to members of the basketball program, according to law enforcement body camera footage obtained by KTSM.

Police were serving warrants from the Bernalillo County District Court, looking for a phone and other items. Police were looking for NMSU players Marchelus Avery, Issa Muhammad and Anthony Roy, trying to serve search warrants in relation to the ongoing investigation into a deadly Nov. 19 shooting in Albuquerque involving NMSU basketball player Mike Peake.

It’s important to note that no one involved with NMSU athletics has been charged with a crime in the case.

As many as 10 law enforcement officials went looking for NMSU’s player in the hours before the Aggies beat the Miners on their home court. Police say those three aided Peake after the shooting that left Peake injured and 19-year-old UNM student Brandon Travis killed.

Police can be seen asking some members of the NMSU team if they were those three players, but did not find them outside the Pan American Center. They also gave paperwork to associate head coach Dominique Taylor, who turned the gun Peake used over to law enforcement in the hours following the shooting on Nov. 19.

After speaking with Taylor outside, law enforcement went into the coach’s offices inside the Pan American Center to speak with head coach Greg Heiar and handed him documents as well. Officers asked Heiar how to get a hold of some of the players to give them the search warrants. The following interaction can be heard on the body camera footage.

Police: “Do you have a way to get a hold of these 3 players?”

Police: “So they’ll be at the game tonight though, right?”

Police: “They’re gonna be at the game tonight though?”

It remains unclear if any of the players were given those warrants. KTSM asked state police for copies of them but were instead given another copy of the Nov. 19 incident report. NMSU did not comment on the report, citing the ongoing investigation.

After police showed up, the Aggies beat the Miners 95-70 later that night. But after the game, NMSU players told the media that Peake had called the locker room at halftime.

“(Peake) told us to keep our foot on their neck,” senior guard Xavier Pinson said.

Added Roy, “He got on the phone screaming. He was excited to see our halftime lead. He wanted us to keep it pushing, don’t let up.”

Heiar then said Peake called in after the game.

“He said he was hopping around his play on one leg and just saying how excited she was,” said Heiar.

“Some of our guys already spoke to Mike at the hospital,” officer David Esquibel can be heard saying to Cartwright on body camera footage. “He told them that he gave a weapon and his tablet to a couple of the other players, Issa Muhammad and Anthony Roy. If those items are in one of their rooms then we need them to hand them over now because they’re evidence. We don’t want anyone else to get hemmed up for tampering with evidence.”

Peake’s gun, tablet and phone were all found later that day with various New Mexico State University officials. His tablet was found on NMSU’s bus, after it stopped at a rest stop after leaving the hotel and Esquibel had followed it there. Peake’s phone was given to police by NMSU athletic department employee, Ed Posaski.

According to the police report, the three players told head coach Greg Heiar the gun was located in a room on the second floor of the hotel; Heiar then called Taylor and directed him to retrieve it and hand it over to police. On body camera footage, the detective can be seen asking Taylor if he has the gun over the phone; Taylor says yes.

Taylor is then seen on body camera footage later that day on Nov. 19 saying which players alerted coaches to the whereabouts of the items, in particular the gun.

“Muhammad, Avery and Roy,” Taylor said. “I don’t know which one had it or which room it belonged to but those were the ones who had the answers when Coach Heiar asked them, ‘hey, where’s this stuff at?'”

An NMSU police officer asked state police over text message on Nov. 19 if any Aggie players could be charged, Officer Esquibel responded saying he didn’t think so. Almost 3 weeks later… none of them have.

On Wednesday, New Mexico State suspended Avery, Muhammad and Roy for the Aggies’ game on the road at Santa Clara last night, due to the ongoing investigation. Peake has been suspended indefinitely since Monday.

KTSM has confirmed a Las Cruces Sun-News report that Anthony Roy is on probation from a 2021 drug charge in Idaho. Roy was suspended for Wednesday night’s game at Santa Clara and did not make the trip to California for what the school called on Tuesday, “personal reasons.”

All of this comes as a result of a deadly shooting at UNM on Nov. 19 that left 19-year-old UNM student Brandon Travis dead and New Mexico State men’s basketball player Mike Peake hospitalized with injuries. Peake was in Albuquerque for the originally scheduled Nov. 19 game between the Aggies and Lobos at The Pit.

According to police, the shooting was in response to a fight on Oct. 15 at the UNM-NMSU football game in Las Cruces involving Peake, other NMSU student-athletes, Brandon Travis and other UNM students.

Travis and four other UNM students conspired to lure Peake to campus at 3 a.m. Saturday morning and assault him. So far, two of those students have been arrested: 19-year-old Jonathan Smith and a 17-year-old female, both of whom have been charged with multiple crimes, including Aggravated Battery and Conspiracy.

The school says Peake was disciplined for his role in an Oct. 15 fight that was the alleged precursor to the Nov. 19 shooting, but has not detailed what that discipline was.

NMSU and police have confirmed that Peake took a gun on a team bus to Albuquerque, breaking University policy, and carried a gun on the UNM campus, a misdemeanor in New Mexico.