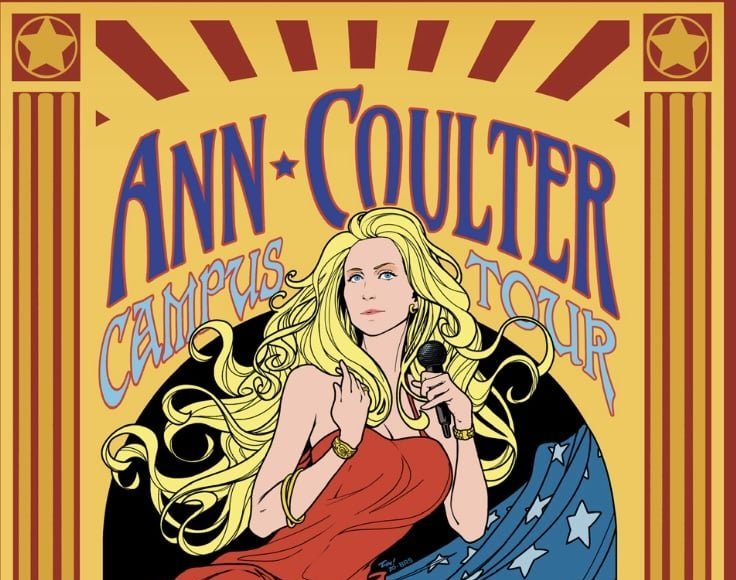 Ann Coulter has pop culture icon status — and now she’s on Substack, so that must be the new, big thing. She appeared as herself (but Vice President) in the cult classic “Sharknado.” She roasted Rob Lowe on Comedy Central. The best jokes didn’t air on TV, an experience all good comedians go through. She appeared with George Carlin on “The Tonight Show with Jay Leno.” She was flawlessly portrayed by Cobie Smulders in Ryan Murphy’s “Impeachment: An American Crime Story”; had a “Law & Order” based on her (“Talking Points”); and inspired a character in “The West Wing” (Ainsley Hayes).  One tidbit that wasn’t shown in the series was the Linda Tripp tapes were first heard thanks to Coulter’s collection of bootleg Grateful Dead concert tapes and her need to own a top-of-the-line tape deck.

Coulter understands the power of storytelling.

When the hit series “Breaking Bad” ended, the finale sparked hundreds of theories and reviews from TV critics and fans. Coulter called the show “the most Christian Hollywood production since Mel Gibson’s ‘The Passion of the Christ.’”

“It may seem counterintuitive that a TV show about a meth cook could have a conservative theme, much less a Christian one, but that’s because people think Christian movies are supposed to have camels — or a ‘Little House on the Prairie’ cast. READ THE BIBLE! It’s chockablock with gore, incest, jealousy, murder, love and hate.

Because the Bible tells the truth, the lessons are eternal — which also marks the difference between great literature and passing amusements. Recall that even Jesus usually made his points with stories.”

Coulter is the author of 13 New York Times bestselling books (more than Oprah) and while O Magazine stopped publishing in 2020, Coulter is adding to her media empire. Her columns on pop culture – soccer, the horrible DC dating scene, “Sex and the City,” and many other hot issues – are among my favorite things.

Yes, Ann Coulter is my Oprah.

Pop Culture Warriors with Lisa De Pasquale is an interview column dedicated to the significant work of freedom lovers who chose the path of more resistance. Not only are these pop culture warriors fighting the predominant groupthink in entertainment, but also the predominant groupthink on the right side of politics that entertainment doesn’t matter or that the pop culture war is lost. The purpose of this column is to highlight their projects and contributions to expand freedom in new, exciting, and counterculture ways.

What do you think Andrew Breitbart meant by “politics is downstream from culture”?

I assume something similar to G.W. Bush’s claim that we needed to change “hearts and minds” on abortion.  In the context of abortion, that was, of course, idiotic.  It didn’t matter how many “hearts and minds” we changed: The decision had been taken out of our hands by an imperial judiciary. (Until now!) But in a democracy – which liberals claim to love dearly — voters’ hearts and minds matter.

I don’t know if Andrew would say this but I would say Hollywood’s fictional characters are far more influential than straight commentary.

Normal person: I don’t want my kids hanging around any of those screwy Christians.  Hey, let’s do something wholesome and go to drag queen story hour!

What was your first concert and how did you get there?

Elton John, then the Ramones.  I was 14 – I took Metro-North into NYC with my boyfriend.

What do you listen to or watch while working?

Tell us about the last movie, TV show, book you consumed for entertainment.

The last thing I watched (apart from MSNBC, especially Joy Reid, 7pm every week night!) was during the moronic COVID shutdowns, when I watched every season of “Silicon Valley,” beginning to end.  It’s the funniest show I’ve ever seen.  Nothing could ever be as good again, so, after that, I went back to books.

A million books, too many to name — and I’d surely leave a bunch out and insult my friends!  Among them: The Age of Entitlement, Human Diversity, Facing Reality, Willpower, The Power of Habit, Edith Wharton’s Age of Innocence and House Of Mirth, loads of Agatha Christies, Raymond Chandler, Ultra Violet’s Famous For 15 Minutes, Empire of The Sun, White Gold, Scoop, Dean Koontz, Hunter Biden’s autobiography, Bill Barr’s book — and at least part of every Trump Book.

What would you say to readers who say they’ve opted out of the pop culture war?

Whatever it is that you do do well, go to L.A., NYC or Silicon Valley and do it there.  Anything — make-up artist, teacher, set designer, computer coder, driver, gardener, cameraman, writer, actor.  Whatever influence you can have should be deployed in the nerve centers of the culture.  (If you’re a liberal reading this, please stay in Peoria.)

What can readers do to support you and your projects?

So glad you asked!  Try out my new substack – anncoulter.substack.com – and if you like it, subscribe to get my stuff delivered directly to your inbox (on an irregular and not annoying schedule).

What is a dirty bomb and why is Russia talking about...

London’s cycle hire scheme has its busiest year ever