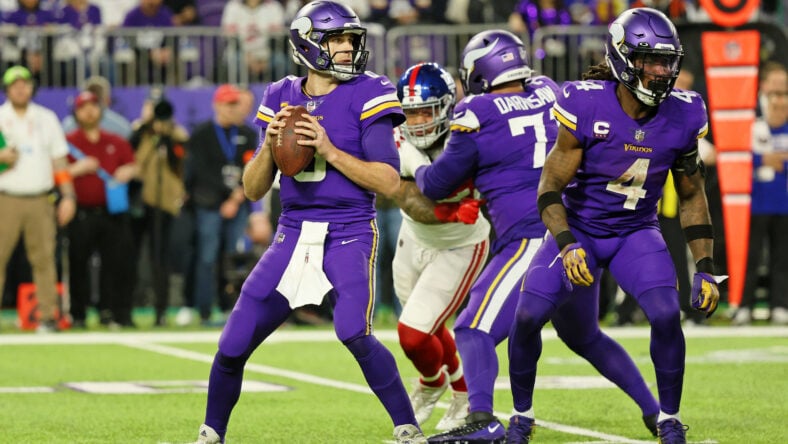 VikingsTerritory’s Purple Rumor Mill is a two-day chronicle each week. All the week’s rumors are lassoed and plopped in two spots — articles on Saturday and Sunday — for review. Today is the January 21st edition.

Rumor: The Vikings will once again extend Kirk Cousins’ contract.

General manager Kwesi Adofo-Mensah defined his philosophy upon arriving to the Vikings as a “competitive rebuild.” So, that means Minnesota will continue to pursue the playoffs while transforming the roster on the fly.

The Vikings have no heir apparent to Kirk Cousins on the current roster. The team waived Kellen Mond last summer, and Josh Rosen is the only other option. Yes, him.

Ergo, unless Adofo-Mensah believes he’ll find a Week 1 starter at quarterback with the 23rd overall pick, it will likely be Cousins for another year or two.

KSTP’s Darren Wolfson said this week on the Mackey & Judd show, “There are people close to Kirk fully anticipating an extension coming before next season.”

You should expect Cousins back as the Vikings QB1 in 2023, with a fresh extension to boot.

Rumor: Patrick Peterson wants to return with the Vikings in 2023.

If the money is right — that is generally a big if — Peterson indeed wants to return with the Vikings for a third act. He’s all about it, in fact, telling his cousin Bryant McFadden on the All Things Covered podcast about his desire to remain a Viking. Then, on Friday, the day after Minnesota canned defensive coordinator Ed Donatell, Peterson echoed the same sentiment.

Peterson said Thursday before the Donatell news, “I would love to be there in that purple and gold again and give it a run again just because I love the community there. I love the organization. I love the new regime that [was] brought into that building, the trainers, the strength and conditioning staff. It’s just amazing. I truly believe it felt like home for me. I felt like it was a place that I belonged. But we all know it’s a business.”

The next day, Peterson reaffirmed his plans to stay with the Vikings, telling CBS Sports, “I love it there,” in reference to Minneapolis and the Vikings organization.

This one is basically up to Adofo-Mensah.

Rumor: Wes Phillips was coveted around the league for another OC job but will stay put in Minnesota.

Kevin O’Connell is Minnesota’s skipper and is the team’s offensive playcaller. In theory, Phillips probably would’ve called plays for the Chargers.

But Phillips reportedly declined, as ESPN’s Jeremy Fowler tweeted Thursday, “The Chargers have requested to speak with Vikings offensive coordinator Wes Phillips about their OC position, but Phillips plans to stay with Minnesota, per sources. Phillips highly valued there and Vikings building something he wants to see through.”

The Vikings will have total offensive continuity in 2023, assuming Cousins is back.

Indian and Chinese troops fight with sticks and bricks in video