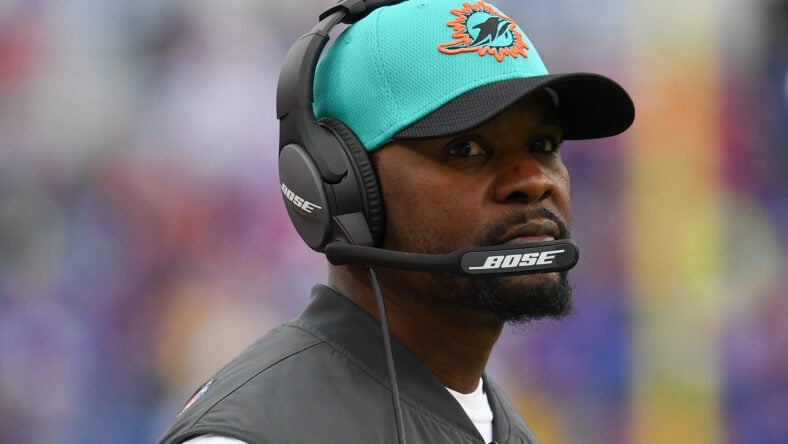 VikingsTerritory’s Purple Rumor Mill is a two-day chronicle each week. All the week’s rumors are lassoed and plopped in two spots — articles on Saturday and Sunday — for review. Today is the January 22nd edition.

Rumor: Brian Flores is a frontrunner to become the Vikings next defensive coordinator.

He may not be the announced “frontrunner” just yet, but he is the first candidate linked to the Vikings defensive coordinator search.

Minnesota fired Ed Donatell on Thursday after his defense finished 27th in the NFL this season per DVOA. And, of course, the Vikings defense was thoroughly exposed in last weekend’s playoff game against the New York Giants.

Flores is a tremendous defensive mind, leading the Miami Dolphins back to defensive respectability from 2019 to 2021.

He would be a magnificent hire as Kevin O’Connell’s defensive coordinator.

While Brian Flores may be on the way for defense, Keenan McCardell may be exiting the backdoor to pursue offense — with the New England Patriots.

McCardell joined the Vikings coaching staff in 2021, and when the franchise cleaned house with a new general manager and coaches last year, McCardell was the last man standing for coaching holdovers. Even beloved men like Andre Patterson trekked to new teams. But McCardell stayed, pairing with O’Connell and OC Wes Phillips.

He’s probably due for an offensive coordinator job, and it’s pretty neat that Bill Belichick is giving him a look. McCardell deserves it.

Rumor: Justin Jefferson wants to remain with the Vikings and will re-sign with the team this offseason.

At the Vikings year-end press conference, Adofo-Mensah was asked if retaining the soon-to-be Offensive Player of the Year, Jefferson, would be a challenge. The young executive grinned and said, “I wouldn’t use the word challenge. You got a special player, a special person. Those aren’t problems. Or at least those are champagne problems.”

Adofo-Mensah added about Jefferson’s upcoming extension, “So, we’ll start there. We’ve had initial dialogue with him, his agent. All those things we get back to that in the planning, but again it really starts from the player, the person, and we’ll work on solutions from there on.”

Jefferson also wants to stay with the Vikings, telling reporters on Monday, “I will be wherever I’m wanted. If they want me here, I’m here. That’s not something that I can really control.”

So, yes — expect Jefferson and the Vikings to announce a megadeal in the next couple of months, linking the phenom wideout to the franchise for the next six or seven years.

Everything on a Fashion Editor’s Wish List From Urban Outfitters’ 30%-Off...