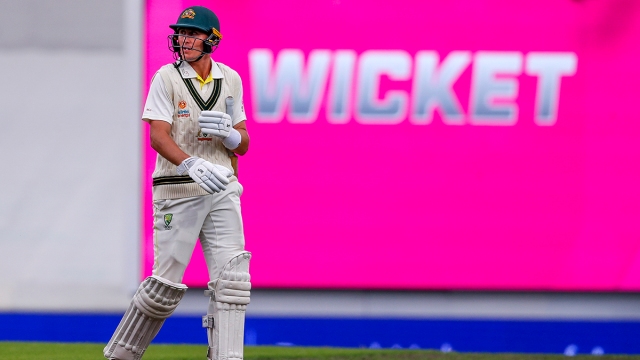 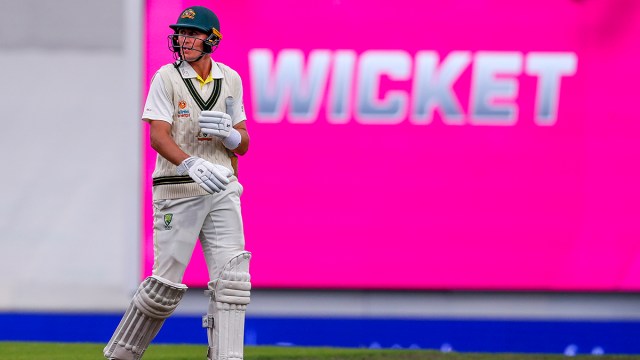 Marnus Labuschagne has been left to rue Sydney’s poor weather after being denied a fourth century of the summer on a rain-interrupted opening day of the third Test against South Africa.

Labuschagne was caught behind for 79 from a vicious, rising ball from Anrich Nortje, before players immediately left the field for the second time for bad light with Australia 2-147 late in the day.

The right-hander’s dismissal came in a brief four-over stint between delays, after more than two hours were lost in the middle of the day due to rain and poor light.

Forty seven overs into the Test, it already appears likely that weather could present the biggest hurdle for the hosts as they push for guaranteed qualification in the World Test Championship final with a win.

Poor weather has now affected six of the past seven Tests at the SCG, with further rain forecast later in the week.

Labuschagne had looked in impeccable touch before his exit, pulling and cutting his way past 50 as part of a 135-run stand with Usman Khawaja (54no).

After being patient in the first session, Labuschagne added 42 in his 53 balls after lunch as he took to Kagiso Rabada and Keshav Maharaj.

His only other scare came on 70 when he edged a ball off Marco Jansen and was given out on soft signal, before third umpire Richard Kettleborough deemed the ball had bounced before reaching Simon Harmer.

South Africa was left furious and remonstrated with umpire Chris Gaffaney and Labuschagne, with the latter adamant the ball had bounced.

At the other end, Khawaja became the 27th Australian to pass 4000 Test runs as he continued on his merry way at the SCG.

Now averaging more than 100 at the ground, he pulled the ball nicely and drove neatly through the covers.

Earlier, David Warner was the only Australian to fall in the opening session when he edged Nortje (2-26) to first slip on 10 as he chased a wide delivery.

Already up 2-0 in the three-Test series, Australia has had more difficulty off the field than on it with Matt Renshaw testing positive to COVID-19.

Recalled to the Test team on Wednesday morning after four years out, the Queenslander reported feeling unwell before the start of play.

He has since kept his distance from teammates, but at this stage plans to continue in the Test while batting at No.6.

Peter Handscomb has been listed as an emergency fielder for the match, with he and Marcus Harris possible options to replace Renshaw under ICC rules if he is too unwell.

The post Rain in Sydney cruels Marnus Labuschagne’s hopes for fourth ton as Australia reaches 2-147 at stumps appeared first on The New Daily.

No. 1 Alcaraz already back in Spain for Davis Cup Finals