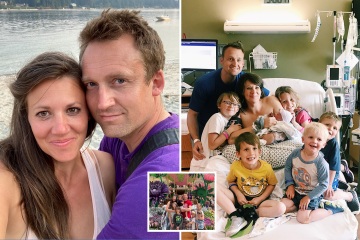 RISHI Sunak has today slashed Labour’s poll lead in a massive bounce back after just one week in the top job.

Labour is now leading by 16 points, an 11 point drop from last week’s 27-point lead, the latest Opinium poll has revealed.

When it came to the economy, a total of 33 per cent of Brits said they would prefer ‘a Conservative government led by Rishi Sunak’ than a Labour one lead by Keir Starmer[/caption]

And Mr Sunak’s top three priorities have been revealed ahead of his first full week as PM.

He is understood to wants the Government to focus on crime, the NHS and restoring “economic stability”, the Sunday Telegraph reports.

Research carried out by pollsters Opinium found Tory support has soared by five percent to 28 between Wednesday and Friday.

And Labour is now down six points to 44 per cent.

When it came to the economy, a total of 33 per cent of Brits said they would prefer “a Conservative government led by Rishi Sunak” than a Labour one lead by Keir Starmer, the Daily Mail’s poll found.

Her resignation sparked a Tory leadership race, which saw Sunak come out on top.

It comes as the PM’s top three priorities are revealed.

MY SON SAVED MY LIFE


At least 153 Halloween revellers killed in horror stampede in Seoul

In his first speech as Prime Minister, Mr Sunak vowed: “I will place economic stability and confidence at the heart of this government’s agenda.

“This will mean difficult decisions to come. But you saw me during Covid, doing everything I could, to protect people and businesses, with schemes like furlough.

“There are always limits, more so now than ever, but I promise you this: I will bring that same compassion to the challenges we face today.”

He also used his speech to promise to build a “stronger NHS” after the coronavirus pandemic, the second point on Mr Sunak’s agenda.

And his third priority is said to be policing.

A source has claimed the new PM wants to stamp out “woke” policing with plans to get more cops on the frontline.

The new PM blasted police forces for “policing bad jokes on Twitter” instead of “fighting actual crime” during his summer leadership bid.

And now, Mr Sunak is said to want more cops on the front line “preventing and solving” crime on Brits’ doorsteps.

The chief earlier blasted “woke” policing, and claimed the public are “fed up of virtue-signalling police officers”.

His “back-to-basics” approach – which put more bobbies on the beat – took GMP out of special measures in just 18 months.

Groom Has Unplanned Conversation With Keanu Reeves at Hotel Bar –...