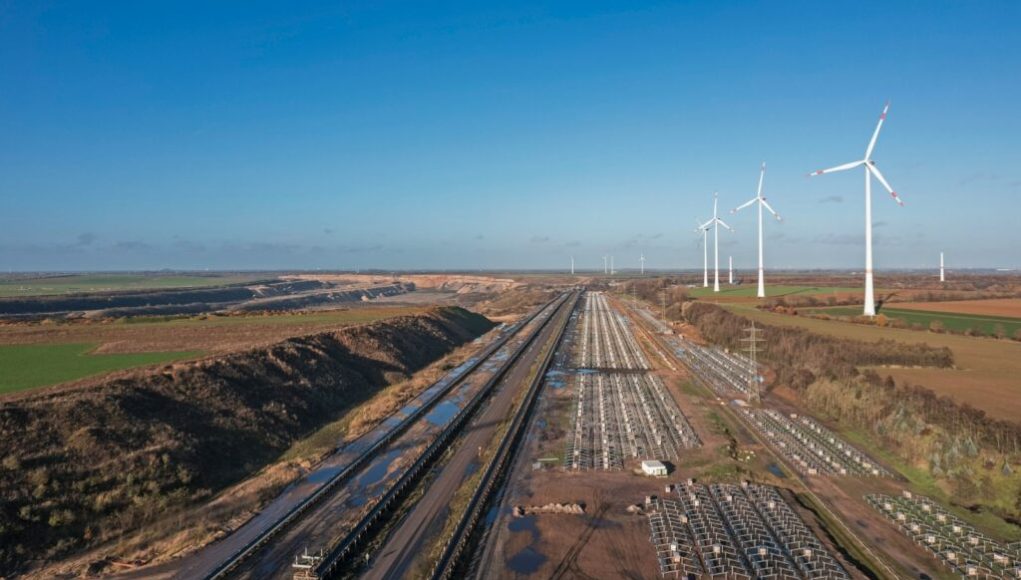 The solar and storage projects are being built in the Garzweiler opencast lignite mine near Bedburg, in the district of Rhein-Erft, and will be commissioned in spring 2023.

The first is a solar PV and battery storage system being built directly below an existing operational wind farm (Königshovener Höhe), which will total 19.4MWp of solar power and 6.5MW/13MWh of energy storage. Construction on the unit has already started.

Meanwhile, the second project, called Jackerath, will total 12.1MWp of solar PV and 4.1MW/8.1MWh of battery storage and will be located at the western edge of the mine.

Both projects were awarded to the company under Germany’s Innovation Tender for solar and storage projects, which will see them receive an additional fixed market premium per kWh of energy to offset technology investment costs.

The solar PV arrays will comprise a combined total of 58,340 bifacial modules, which RWE project manager Christian Meisen said would make the PV array ‘extremely efficient’, adding: “And with the batteries, feed-in can be optimally tailored to meet demand. We are implementing this integrated plant concept at several locations at the same time.”

However, as with the investment tax credit for co-location in the US, some companies in the market have said publicly that the Tender’s requirement to only charge from the solar PV is not the best use of the energy storage asset (read a long-form feature about the German utility scale energy storage market in the most recent edition of PV Tech Power, sister site PV Tech’s quarterly journal).

RWE brought another solar and two-hour duration storage project with 9.6MWh capacity online in a separate lignite mine in spring this year, also in NRW where it is headquartered and much of its activity is concentrated.

The firm has committed to a 2029 closure of all its lignite mines in Germany, and has plans to build 500MW of renewable generation assets just in its mines around the Rhine river, including 200MW of wind.

It is also building substantial standalone battery storage projects in Germany’s most populous state including two units totalling 220MW while a 72MW project is scheduled for operation by the end of this month.

Energy-Storage.news’ publisher Solar Media will host the eighth annual Energy Storage Summit EU in London, 22-23 February 2023. This year it is moving to a larger venue, bringing together Europe’s leading investors, policymakers, developers, utilities, energy buyers and service providers all in one place. Visit the official site for more info.

The Funniest Marriage Tweets To Get You To The End Of...