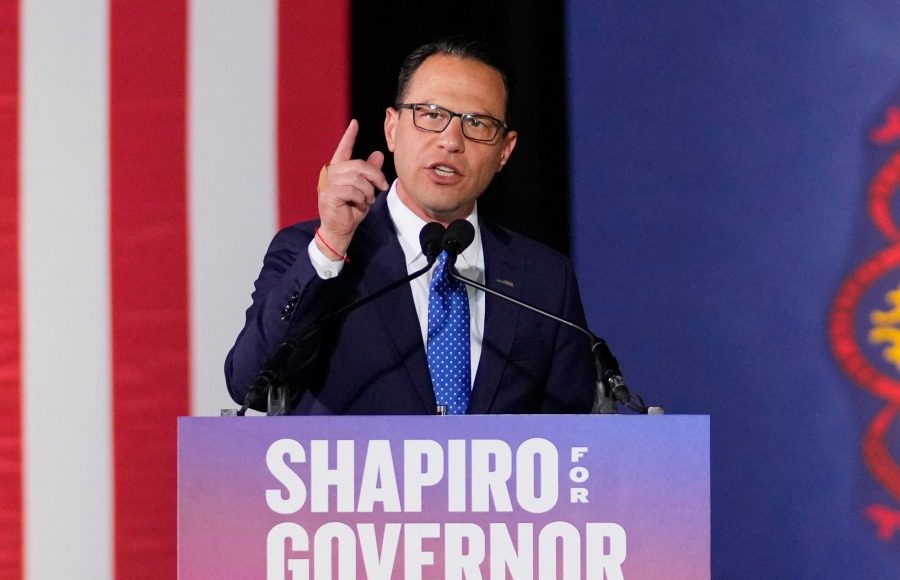 HARRISBURG, Pa. (AP) — Josh Shapiro, the Democratic governor-elect of Pennsylvania, will take office with a decisive mandate from voters, who overwhelmingly rejected a Republican drive to pare back abortion rights and voting laws in the premier battleground state.

Democrats in the state also flipped a U.S. Senate seat — just the second time since the Civil War that the state elected two Democrats to the chamber — while winning a majority of the state’s congressional seats and possibly even control of the state House of Representatives for the first time in 12 years.

“In a lot of ways, it was a triumph over extremism as much as anything, and we probably underestimated that in the election,” Casey said.

Set to be sworn in Jan. 17, Shapiro will take the reins in a state riven by bitter partisanship over voting laws and the management of the COVID-19 pandemic by his predecessor, outgoing Democratic Gov. Tom Wolf. That helped drive a record number of vetoes by one governor going back to the 1970s.

Shapiro will likely face battles with Republicans who control the state Senate over the grist of statehouse business, such as budgeting.

And, with the 2024 presidential election looming, big questions remain unresolved over the state’s voting laws after three years of partisan gridlock, ongoing court battles over mail-in voting and Trump’s lies of fraud in the 2020 election that still buffet the state.

Still, Shapiro stressed that crossover support from Republican voters aided his victory against Mastriano, a far-right state senator who spread conspiracy theories, supported a complete ban on abortion and did more than any other gubernatorial candidate in the nation to subvert the 2020 presidential election.

Pledging to manage the state’s affairs with bipartisanship in mind, Shapiro said he has a “mandate” to bring people together and vowed to work with Republicans in the state Capitol.

One conservative advocate, Leo Knepper, political director of the Citizens Alliance of Pennsylvania, said he worries that Republican lawmakers will shrug off conservative principles because of the size of Shapiro’s victory.

“I think that some of these Republicans are going to have their eye to the fact that he won by a fairly significant margin and what did that margin look like in their districts,” Knepper said.

About 6 in 10 independents backed Shapiro in the election, compared with about 3 in 10 who supported Mastriano, according to AP VoteCast, an expansive survey of more than 3,100 voters in the state.

Shapiro maintains that he will veto any legislation that he views as undermining abortion rights or voting rights. But, in a nod to the potential for Democrats to control the state House of Representatives, he told KYW-AM radio in Philadelphia that it appears that he “won’t have to wield that veto pen much.”

The Associated Press has not called two state House races that will determine which party controls the majority. County election boards are expected to certify results later this week.

Shapiro entered the race as a dominant figure in the state Democratic Party, a powerhouse fundraiser and polished speaker elected twice statewide — someone who even Republicans say is a talented politician.

He unified the Democratic Party, its leaders and its allies behind his candidacy, cleared the primary of challengers and ran to the middle on key issues, including on energy in the nation’s No. 2 natural gas state.

He proposed a big corporate income tax cut and opened the door to Republican plans to allow broader state funding of private and parochial schools. And he rejected Wolf’s COVID-19 policies, saying he would not order mask mandates or business shutdowns in a pandemic — even though his office had defended them in court.

In post-election interviews, he stressed that he will focus on his core priorities of improving schools, safety and the economy.

Shapiro also must assemble a Cabinet and name a replacement to finish the last two years of his term as Pennsylvania’s top law enforcement officer.

Shapiro will take office with the state in a stable financial position, thanks to strong tax collections and billions in federal pandemic aid.

Still, the state Supreme Court is considering a legal challenge to how the state funds public schools, a lawsuit that could impose major changes on how the state distributes billions of dollars in school funding.

He will be in the middle of the fight over climate change, facing pressure from environmental advocates to crack down on planet-warming greenhouse gas emissions, while labor unions — their members work on power plants, pipelines and refineries — say he promised not to block major new gas infrastructure projects.

Shapiro also will have to navigate a partisan fight over updating Pennsylvania’s voting laws, which has dominated the state Capitol the past two years.

Many Republicans on the campaign trail — including Mastriano and nearly every other candidate in the GOP gubernatorial primary — called for the repeal of no-excuse mail-in voting in Pennsylvania.

With Pennsylvania certain to be a battleground in the 2024 presidential election, the focus on election laws isn’t fading.

On Sunday, Mastriano conceded, issuing a statement that acknowledged his defeat and asked his supporters to give Shapiro the opportunity to lead.

But, he also said work must be done on election laws to make them “transparent, secure and more quickly decided.”

“Pennsylvanians deserve to have faith in our elections,” Mastriano said.

US’ Crocs & Gen.G partner to launch metaverse experience in Zepeto