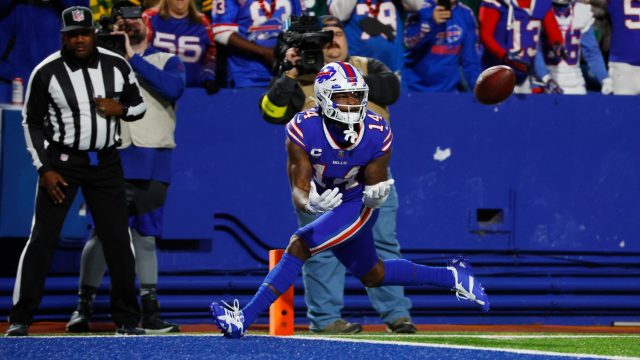 BALTIMORE (AP) _ A lot still has to go right for the Pittsburgh Steelers to make the playoffs.

After what happened this weekend, would you dare count them out?

Kenny Pickett threw a 10-yard touchdown pass to Najee Harris with 56 seconds remaining, giving the Steelers a 16-13 victory over the Baltimore Ravens on Sunday night and improbably keeping their postseason hopes alive entering the final week of the regular season.

“Really proud of those guys in that locker room,” Pittsburgh coach Mike Tomlin said. “Another challenging week, hostile environment, prime time television on the road. But those guys didn’t blink.”

The Steelers (8-8) spent Sunday walking the elimination tightrope, but never quite falling off:

— Miami lost to New England. A win by the Dolphins would have knocked out Pittsburgh.

— The New York Jets lost to Seattle. If New York had won, it wouldn’t have totally eliminated the Steelers, but it would have left them needing the Jets and Dolphins to play to a tie next week for Pittsburgh to have any chance.

Pittsburgh trailed 13-9 and needed to go 80 yards to reach the end zone against a team that hadn’t allowed a touchdown at home since before Halloween. Against their rivals with the season on the line, the Steelers faced third-and-8 from the 10. Pickett scrambled away from pressure, and the rookie threw a perfect pass to Harris, who had slipped behind linebacker Roquan Smith along the left sideline.

“It was just kind of, extend the play a little bit,” Pickett said. “I just wanted to keep my eyes downfield and give one of our guys a shot.”

Pittsburgh can now make the playoffs by beating Cleveland next weekend _ if Miami and New England both lose. Last year, the Steelers slipped into the postseason by beating the Ravens in overtime, and even then, they needed Indianapolis to lose to a Jacksonville team with the league’s worst record.

The playoff-bound Ravens (10-6) now need Buffalo to beat Cincinnati on Monday to keep their hopes of winning the AFC North alive. Baltimore allowed a touchdown at home for the first time in four games, and it was a costly one.

Tyler Huntley threw a scoring pass to Isaiah Likely late in the first half for the game’s only other touchdown.

The Steelers need help to make the playoffs, but they have full control of another streak. They haven’t had a losing record since 2003 — and they never have under Tomlin, now in his 16th season.

A penalty on Pittsburgh’s Cam Heyward led to the game’s first touchdown. With the score tied at 3 late in the second quarter, the Steelers stopped Baltimore on third down, but Heyward was called for unnecessary roughness while on top of the pile. Instead of settling for a field goal, the Ravens had a new set of downs at the Pittsburgh 7 with 11 seconds left.

On the next play, Huntley threw to his left to Likely at the goal line to put Baltimore up by seven.

The Ravens are 2-2 without quarterback Lamar Jackson, who was sidelined again with a knee injury. The passing game looked sharper Sunday than in some of Huntley’s previous action, but he was intercepted at the end of the game after the Steelers took the lead.

Baltimore had just 240 yards of offense.

“Very disappointed. Not one of our better performances at all,” coach John Harbaugh said. “Coaching staff. Start with that, start with me. Game plan, all of it. Not good enough. Very disappointing.”

Harris ran for 111 yards for Pittsburgh. J.K. Dobbins ran for 93 yards for Baltimore.

Harris became the first player all season to rush for 100 yards against the Ravens. Baltimore’s streak of 14 straight games outrushing the opponent came to an end. Pittsburgh won that battle 198-120. … The Ravens have lost just three times in 22 prime time home games under Harbaugh. … The last three games between Baltimore and Pittsburgh have ended 16-13, 16-14 and 16-13. The last six have been decided by five points or fewer. … The Steelers have won six of eight after a 2-6 start. Only Washington in 2020 and Cincinnati in 1970 have made the playoffs after starting 2-6.

Ravens: At Cincinnati next Sunday.

Sound and colour dazzle the senses as the V&A explores the...