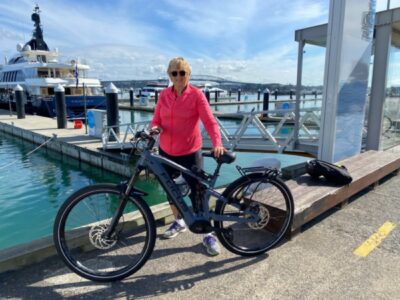 Seventy five-year-old east Auckland resident Jeanette Waters is on the inspirational journey of a lifetime, cycling the length of New Zealand to raise awareness for Sands.

Waters, who is well known within the community, has lived in the area for 52 years and sold real estate for 23 years.

The journey from Cape Reinga to Bluff is around 3000km and will take Waters approximately 44 days across a mix of terrain from beaches, gravel roads, off-road trails and country byways.

“If you had told me a year ago that I was going to do this, I would’ve just laughed,” says Waters.

Waters has been training since April for the ride and set off from Cape Reinga on November 2.

“I just sort of got this idea and thought, ‘well I can do that’ and I just need to train… I started off with 60km rides then 80km and then made sure I did one over 100km every week,” she says.

Although this journey has been a lifetime goal of Waters’, she says that she saw an opportunity to raise awareness around a cause in New Zealand that isn’t widely known.

Sands is a not-for-profit organisation, set up to support families who have experienced the death of a baby.

Baby loss affects more than 600 families throughout New Zealand, and these are babies born from 20-week gestation. It is estimated that there are 7000-14,750 babies lost through miscarriage in NZ every year.

“Sands isn’t a charity that a lot of people have heard of. It just seemed a jolly good cause to ride for really and they’re so grateful,” says Waters.

Waters, who is the youngest of nine girls in her family, recalled a time during her teenage years when she was told she had an elder sister who died not long after birth.

“It was interesting to find that out because my mother must have lived with that for many years, not discussing it with us,” she says.

Waters says she also knows of a few friends who have lost grandchildren as still-born babies or newborns.

“Not many people want to talk about baby loss but our aim is to break that taboo and get people talking and with the help of people like Jeanette, raise awareness,” says a spokesperson from Sands, Auckland.

Waters’ Givealittle page has raised almost $5000 since her cycle began, a few of those donations coming from people she has met along her journey.

“I’m amazed that in some of the pubs that we were going to along the way for a drink, people would come up and say ‘oh you’re the person cycling for Sands’. It has been so motivating,” says Waters.

Waters says that she averages about five hours of cycling a day which can cover a distance of between 80-130km.

“I think no amount of training prepares you for the real thing,” she says.

The journey is scheduled to finish on December 11 in Bluff.