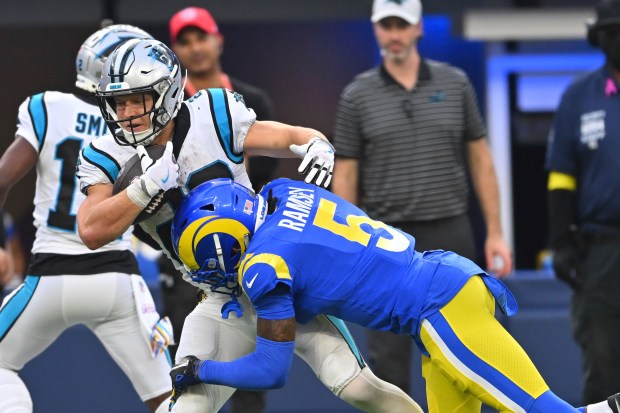 UPDATE: 10:38 p.m. Saturday
The big news Saturday, moreso NFL-wise than fantasy-wise, is that Denver quarterback Russell Wilson has been ruled out of Sunday’s game against the red-hot New York Jets. So Brett Rypien will get the start … for the Broncos, but not a single fantasy football team on the planet.

The Packers have added a receiver to replace the injured Randall Cobb. Sammy Watkins has been re-activated, though he’s a pretty good bet to be injured against sometime around halftime against Washington.

One other Saturday move: Baltimore has re-activated running back Gus Edwards to help fill the void caused by J.K. Dobbins’ injury. Again, not a high priority for any fantasy mavens.

We’ll be back in the morning with news from the early inactive lists.

UPDATE: 11:21 p.m. Friday
Well we didn’t see this one coming, at least not this soon. But the San Francisco 49ers traded a boatload for Carolina’s Christian McCaffrey in what is arguably the biggest NFL trade since the Vikings traded their entire future for a future U.S. Senate wannabe.

Of course, the Vikings’ 1989 deal for Herschel Walker did prove historic … for the Dallas Cowboys, who turned their bounty of draft picks into a mid-1990s dynasty.

Thursday’s deal will not turn the 49ers into NFC favorites. That still looks like Philadelphia. But provided that he stays healthy, CMC will now pair with Deebo Samuel in what is arguably the NFL’s best runner-receiver combo.

The trade is not the only good news for the Niners, as two standouts, offensive tackle Trent Williams and defensive end Nick Bosa, have been cleared to play this week against Kansas City.

The news isn’t as good in Baltimore, where J.K. Dobbins will miss the next four to six weeks after having his injured knee scoped. So Kenyan Drake will stay at No. 1 RB for the Ravens a while longer.

Indy expects to get top running back Jonathan Taylor back in the lineup. And two notable quarterbacks are expected to return to the starting lineup: Dallas’ Dak Prescott and Miami’s Tua Tagovailoa.

Remember when George Constanza went to great lengths to get fired from his job with the New York Yankees? Well the “Seinfeld” favorite has nothing on Robbie Anderson, the mercurial wide receiver.

Frustrated by his Carolina Panthers’ inability to utilize his great skill set, Anderson on Sunday got into several shouting matches with his coaches, leading interim coach Steve Wilks to kick him off the sideline and out of the game.

Come Monday, Anderson got his wish when he was traded for two late-round draft picks to Arizona, hardly an offensive juggernaut itself. Anderson had produced paltry numbers this season (13 catches and 1 touchdown in six games), so his sideline soliloquy was his most successful play of the year.

But Anderson is not the only prominent player whose numbers have been hurt badly because of underperforming offenses. Here are a handful of other players who might be searching for an exit strategy:

Christian McCaffrey (Panthers) — Carolina reportedly is accepting trade offers for its only star, who’s arguably STILL the fantasy king. Despite the Panthers’ ineptness, that has limited CMC to only three touchdowns, he’s still averaging more than 110 total yards per game. Imagine how great he would be with a functioning offense.

D.J. Moore (Panthers) — Moore was considered a top 15 receiver before the season. Now he might be top 150. Carolina’s deep threat receiver has averaged a mere 34 yards per game and has but a single TD. But his proximity to Anderson’s tantrum could mean Moore knows what magic words could get him traded out of Charlotte.

Cam Akers (Rams) — The Rams apparently got sick of Akers’ attitude, announcing that he would not be playing in Week 6 because of personal issues. He probably won’t be back, which won’t hurt the Rams since he had but a single TD and was rushing for just 30 yards per game.

Najee Harris (Steelers) — Pittsburgh’s offensive line woes have carried into this season, and combined with subpar quarterback play, Harris has been struggling against stacked defenses. Only 44 rushing yards per game and one rushing touchdown are a huge disappointment for folks who drafted Harris in the first round.

Terry McLaurin (Commanders) — While Carson Wentz’s passing numbers haven’t been horrible, that hasn’t helped the presumptive No. 1 receiver. McLaurin hasn’t scored since the opener and has only one game where he topped 76 yards. The former Ohio State standout would likely thrive in another offense.

Jerry Jeudy (Broncos) — No one has been more affected by Russell Wilson’s demise than Denver’s No. 1 pass catcher. He has managed to score two TDs despite topping 53 yards only once. And thanks to the season-ending injury suffered by No. 1 RB Javonte Williams, the entire Broncos offense is a sinking ship.

SITTING STARS
You never want a bad quarterbacking performance to ruin your week on Thursday night, so maybe you should find someone other than Arizona’s flailing Kyler Murray? … Veteran QBs that will continue to struggle include Green Bay’s Aaron Rodgers vs. the Commanders and Denver’s Russell Wilson against the surprising Jets. … Chicago RB David Montgomery will have trouble making much ground against New England. … Same goes for San Francisco’s Jeff Wilson vs. the Chiefs. … And with the uncertainty at quarterback, you should be wary of starting any Steelers receivers on Sunday night in Miami.

MATCHUP GAME
Tampa Bay’s offense has struggled of late, but RB Leonard Fournette won’t against lowly Carolina. … Houston rookie RB Damion Pierce could have another big game against Las Vegas. … Baltimore needs a win badly against Cleveland, and tight end Mark Andrews will be very busy against the Browns. … Atlanta finally rediscovered tight end Kyle Pitts last week. Look for him to score again vs. the Bengals. … Detroit WR Amon-Ra St Brown should be healthy coming out of the bye against Dallas. … And two receivers should follow up big Week 6 performances: Indy’s Michael Pittman vs. Tennessee and the Chiefs’ JuJu Smith-Schuster against the 49ers.

INJURY WATCH
Arizona’s train wreck of a season got worse when WR Marquise Brown suffered what could be a season-ending foot injury. DeAndre Hopkins’ return from suspension can’t come soon enough. … Baltimore’s J.K. Dobbins reinjured his knee, which set up Kenyan Drake for his biggest game in ages and could push him into the starting lineup this week. … Washington QB Carson Wentz had surgery on his broken finger, but no one will be rushing to grab replacement Taylor Heinicke. … Quarterbacks who may or may not return this week include Dallas’ Dak Prescott, Miami’s Tua Tagovailoa, New England’s Mac Jones and Pittsburgh’s Kenny Pickett. … Indy RB Jonathan Taylor is expected to return, but status is still uncertain for three notable running backs (Detroit’s D’Andre Swift, Arizona’s James Conner and New England’s Damien Harris) and four notable receivers (Chargers’ Keenan Allen, Ravens’ Rashod Bateman and Saints’ Michael Thomas and Jarvis Landry).

THE DEEPEST SLEEPERS
In a week with four of the NFL’s top receivers on bye (Rams’ Cooper Kupp, Vikings’ Justin Jefferson, Bills’ Stefon Diggs and Eagles’ A.J. Brown), a lot of fantasy mavens will be scrounging for pass catchers. So here are two guys just breaking onto the scene. New England rookie Tyquan Thornton caught a TD pass and ran for another on Sunday in Cleveland, and Giants rookie Wan’Dale Robinson caught his first TD pass against Baltimore. They’re nothing if not readily available in most leagues.

THE THURSDAY PICK
Saints at Cardinals (-1½):
Pick: Saints by 3

BREAKING NEWS
We’ll be updating our column, based on the latest injuries and innuendo, right up until Sunday’s kickoff. Go to TwinCities.com/theloop.

You can hear Kevin Cusick on Wednesdays on Bob Sansevere’s “BS Show” podcast on iTunes. You can follow Kevin on Twitter — @theloopnow. He can be reached at kcusick@pioneerpress.com.