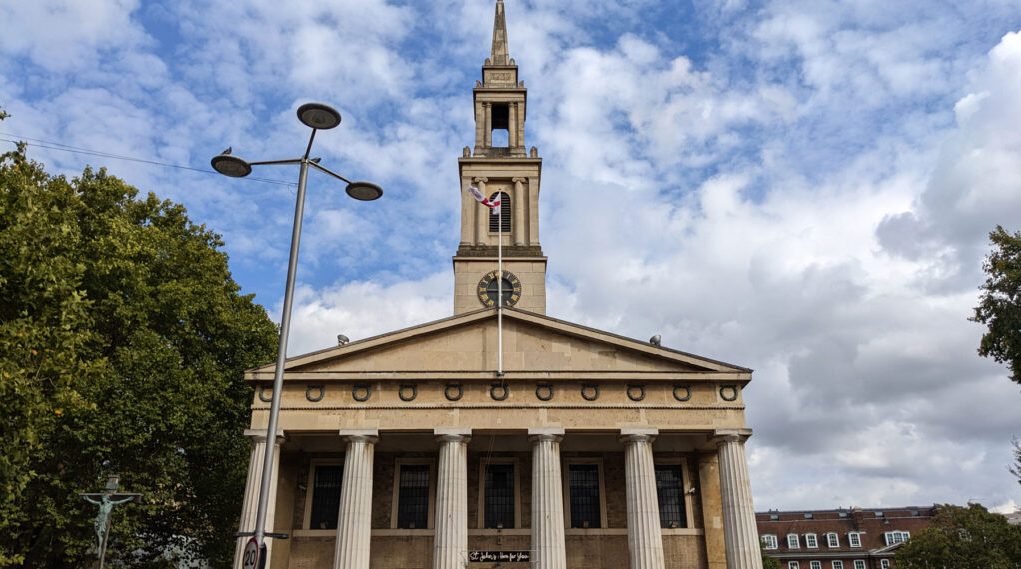 In the run up to its 200th anniversary, a large church in Waterloo has undergone a substantial refurbishment, in part to undo some 1950s repairs but also to make it fit for modern uses.

St John’s Church sits next to Waterloo station and was one of a load of new churches built to serve the needs of London’s fast growing population as the economy recovered from the Napoleonic Wars. The Commissioners for Building New Churches was set up, and the churches are sometimes known as Waterloo Churches in memory of the battle that ended the war. And here, in Waterloo is a Waterloo Church. 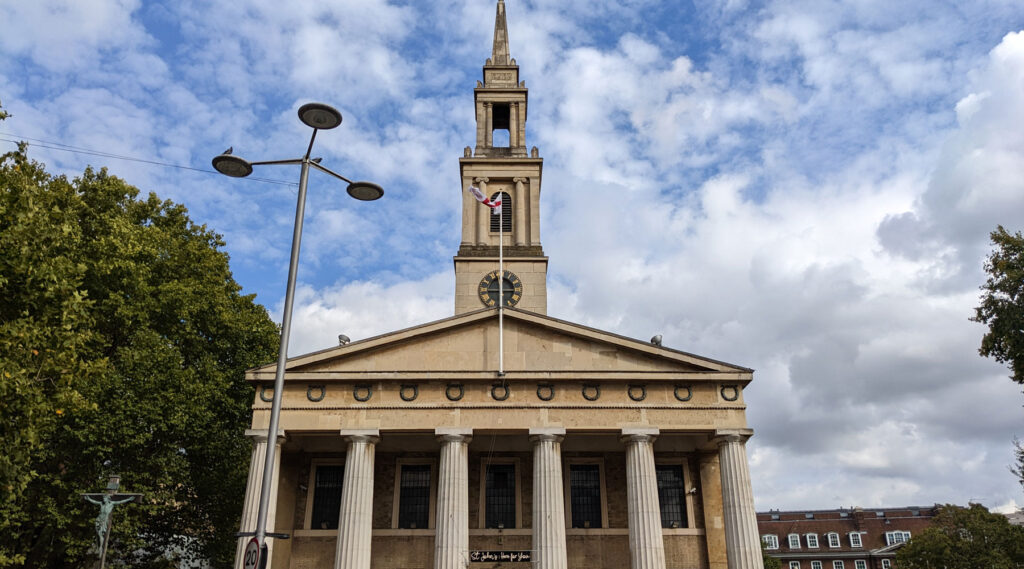 It was a classic of the time, with a classical frontage, prominent spire, and inside a large space with raised seating along the sides to house the congregation. It saw some changes over the decades, but the arrival of a German bomb in 1940 gutted most of the interior. The church was not repaired, and legend has it that when King George VI visited the area to see the construction of the Festival of Britain, he asked where the space for prayer was. There wasn’t one, so they chose to enact a swift repair to St John’s in time for the crowds to arrive.

The repair was carried out by the prolific ecclesiastical architect Thomas Ford.

When the church was rebuilt in 1950/51 by Thomas Ford, while he cleared away a lot of the damaged Victorian clutter creating a vast open space, he also chose to decorate the interior in a colour palate that was rather dreary. The windows had slightly tinted glass which limited the amount of light into the hall and the very 1950s colour scheme was described as a “nicotine brown”. The most dramatic element, the bright green floor had slowly darkened under layers of polish added on top. The ceiling had been covered in a fabric layer, and parishioners raising their eyes heavenwards were more likely than not to get an eyeful of dust falling from the ceiling in return. 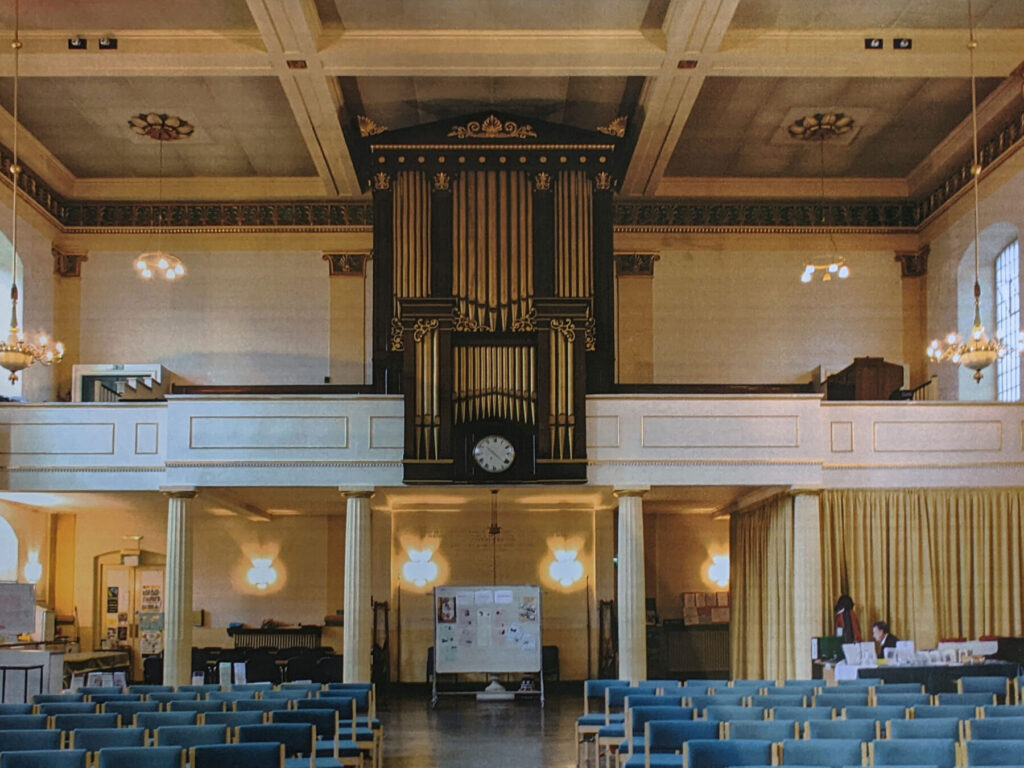 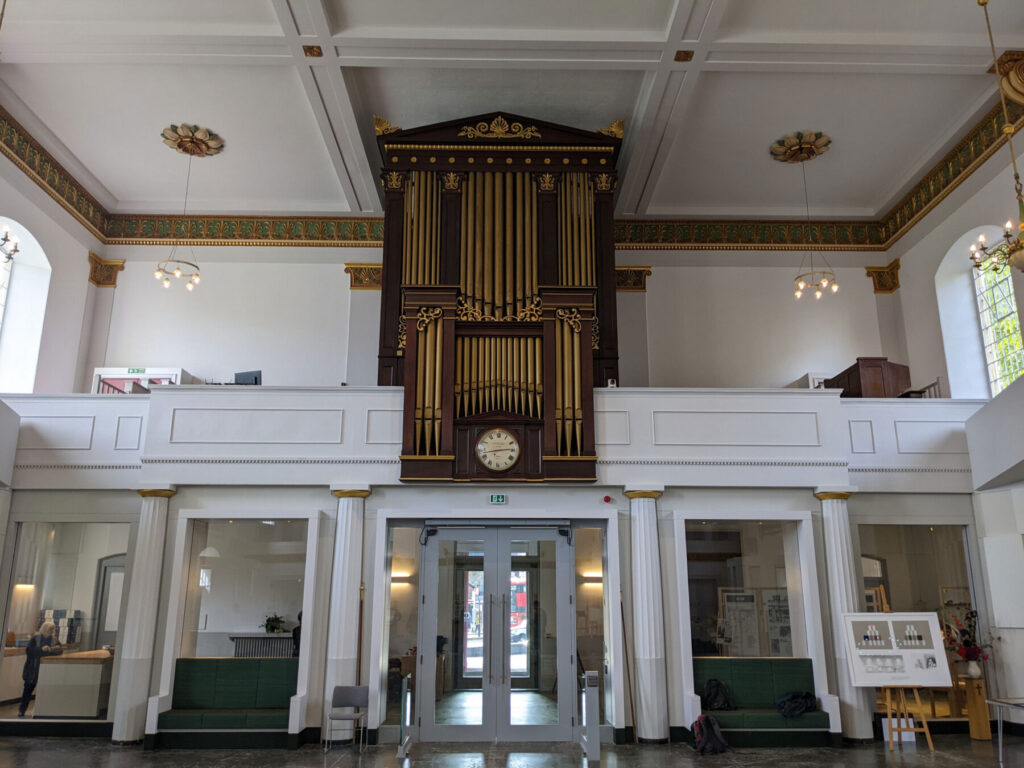 Facing the rear of the church after renovation

The aim of the modern refurbishment has been twofold – to make much more use of the undercroft spaces, and to improve the appearance of the main church hall.

It took a dozen years from initial concept to delivery, in part due to the fundraising effort to pay for the £5.5 million project, but also some objections to the changes from external heritage groups who wanted to preserve the 1950s appearance.

What Eric Parry Architects have done is to pare back the colour scheme to just a handful of pale whites and greys while still retaining Ford’s 1950s decorative Greek-inspired cornices and finials.

Some new angled boxes break up the otherwise flat empty wall space around the edges and also double up as storage space for the chairs when not needed. One of the biggest interventions has been the introduction of a glass wall at the rear of the church and the removal of some of the old partitions. This not only now allows a clear view from the outside into the hall, it also allowed them to create a reception area that’s segregated from the main hall so both can be used at the same time.

The huge mural in the centre by Hans Feibusch used to be flanked by two lesser paintings, but removing them now allows the mural to stand out more dramatically. The mural sits in a space that used to be a stained glass window until the bomb destroyed it, and Feibusch, an artist of Jewish heritage who fled Germany was invited to put a mural there. It had decayed over the decades though as the backing wasn’t that good for mounting into a window arch and needed restoration. Feibusch’s grandson sold some of his paintings to help fund the work.

One of the things they worked to improve is something you can’t see but can hear, and that is the acoustics, as they were less than ideal for a large space. The ceiling panels are now filled with 5cm of acoustic padding to reduce echoes, and they even ensured that the chairs in the hall are covered entirely in fabric to add further sound dampening.

What’s particularly impressive is how closing the glass doors to the outer reception area manages to collapse the outside noise to barely noticeable levels.

The improvement will be a boon for the church’s finances, as they can now hire the space out for concerts and events. Indeed, the Southbank Symphonia have now taken up space in the undercroft for rehearsals.

The church’s aspiration is that roughly a third of the time the church will be used for religious purposes, a third for free for use by community groups, and a third for commercial purposes to pay the bills.

Part of the commercial use will be hiring out the main hall, but they’ve also upgraded the undercroft and converted a bit of a warren of rooms into a series of much more inviting meeting rooms and spaces, with a much better basement reception area.

One space, right underneath the main portico stairs was being used for storage back in 2011, but has now been cleared and restored. Currently used for an art gallery space, it can be hired out for atmospheric dinners and receptions. 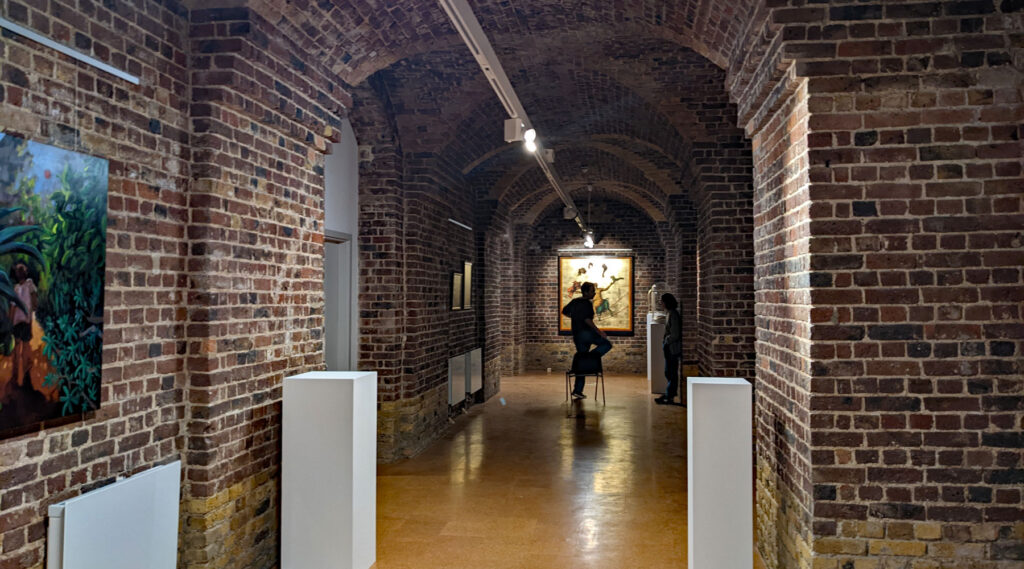 The office spaces have been whitewashed, and they’ve managed to hide most of the service cabling and supplies in the new partition walls so that the brickwork is left largely exposed. A surprising amount of light penetrates into the basement space through the sunken windows, and all the doors have glass panels to get natural daylight into the corridors as well.

Something that’s been added to one side of the main entrance is a lift, making the undercroft fully accessible for the first time, which is not just morally correct, it makes the space more viable to be hired out commercially. Nothing worse than telling someone waving money at you that you don’t have step-free access to the venue they want to rent.

A few things need finishing off.

The floor still needs cleaning to reveal the original vibrant green wooden flooring, and an ambition to install air source heating was abandoned due to cost, although it could be retrofitted later if they can raise the money.

It’s taken a dozen years from concept to completion, but the church is now in much better shape to mark its 200th anniversary which takes place in November 2024. 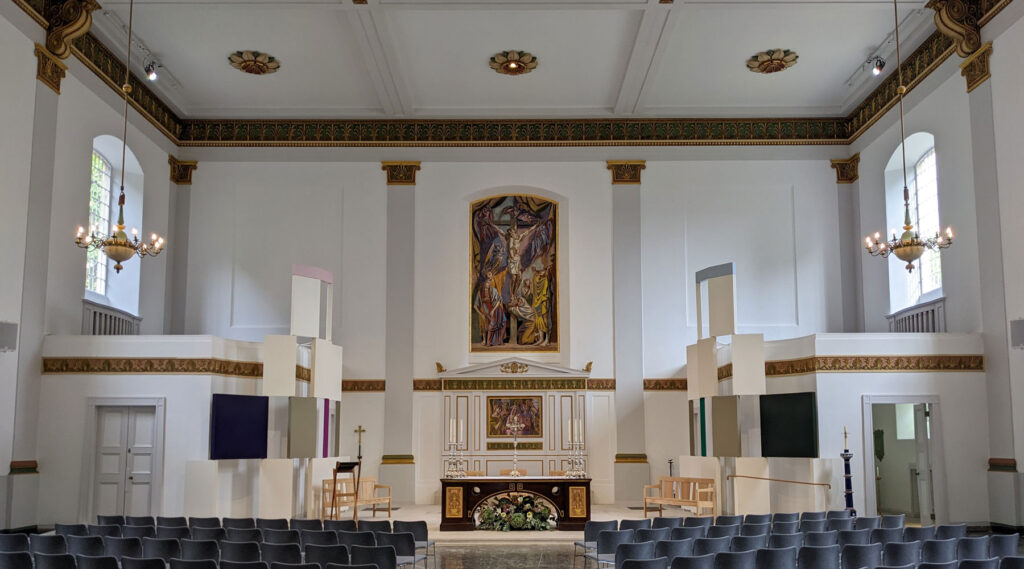 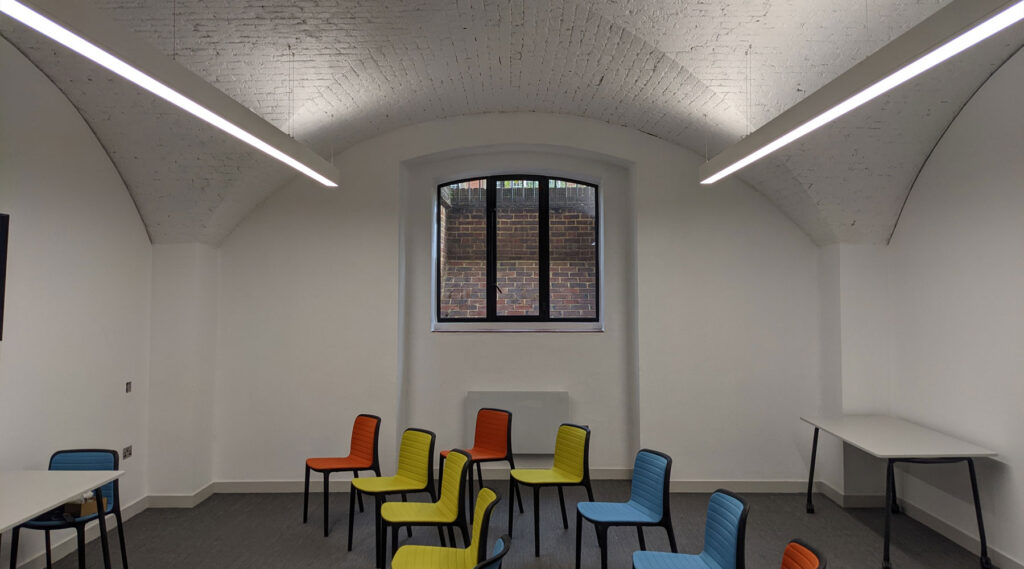 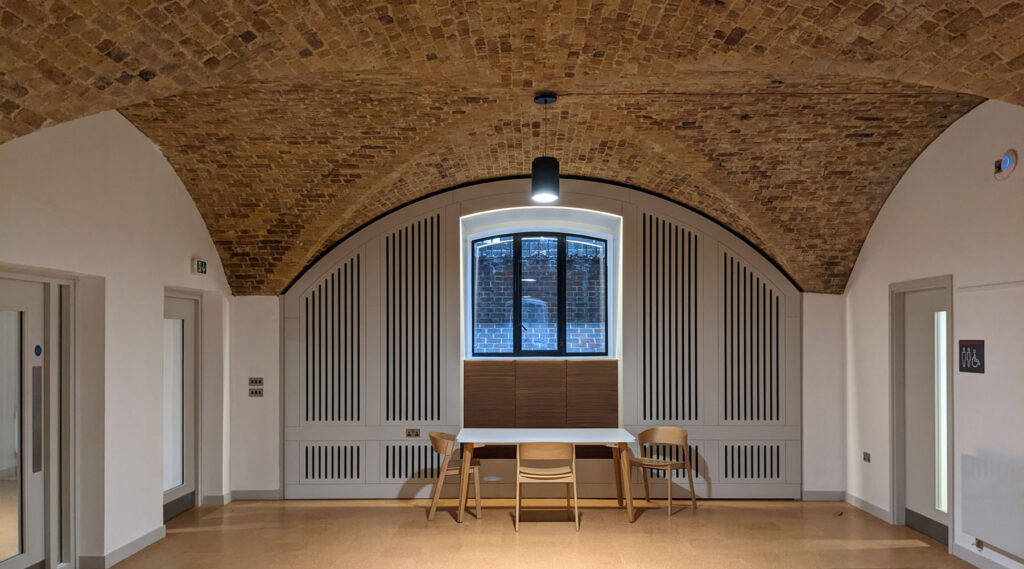 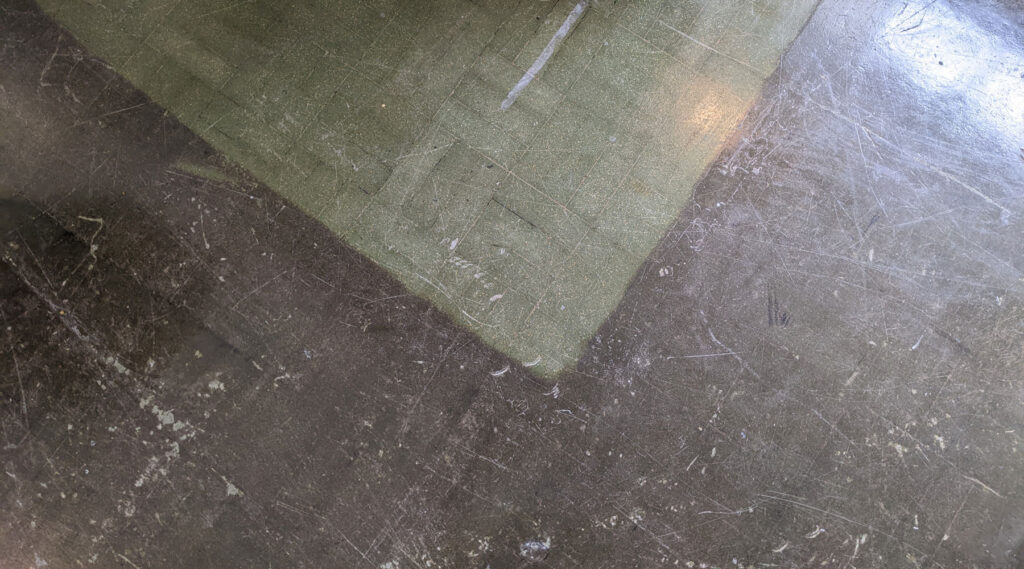 A section of the floor showing the original green that’s now hidden under layers of darker polish. 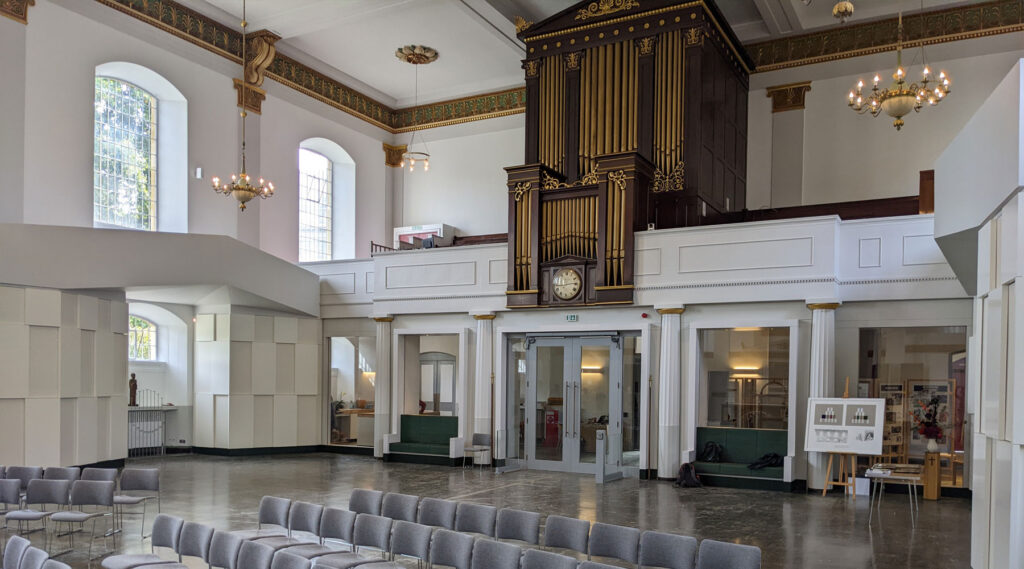 The post The refurbishment of the 200-year old St John’s Waterloo church appeared first on ianVisits.

I Just Got Back From New York—5 Real-Life Trends I Saw...

What Happened When King Charles III Addressed Both Houses Of Parliament?