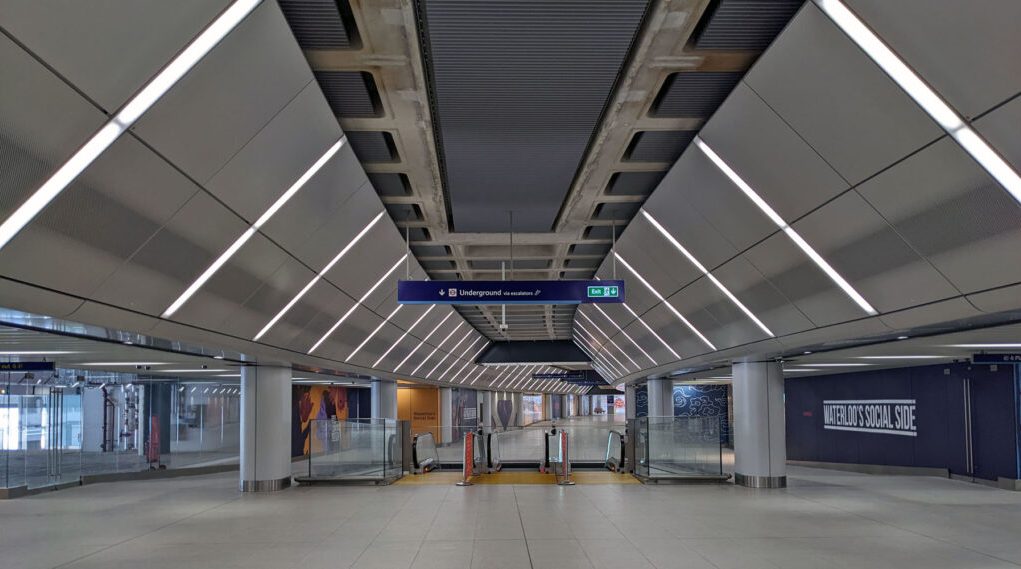 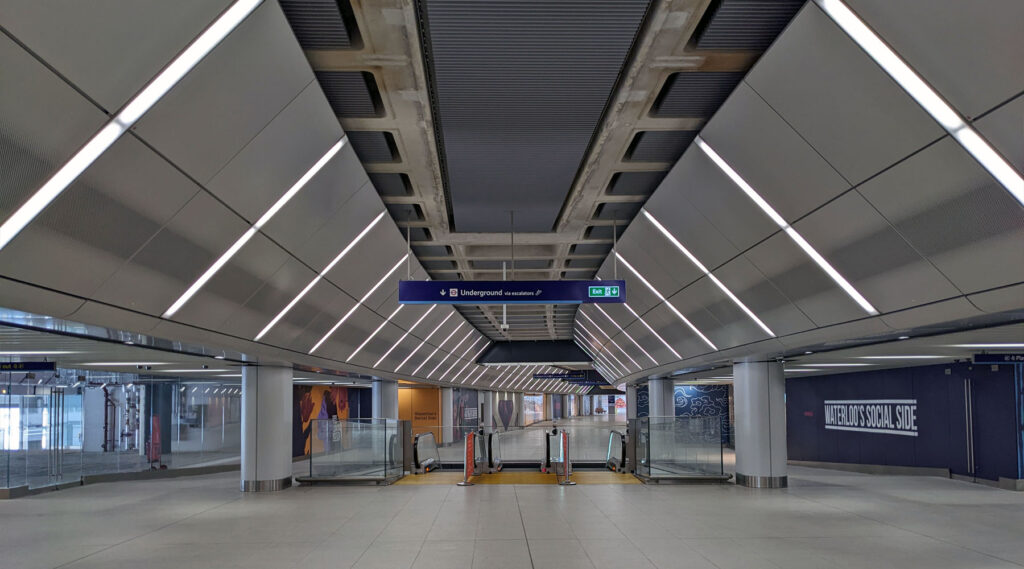 It’s a redevelopment of the former Eurostar terminal that sat underneath the platforms, and part of it opened just before the pandemic as a corridor linking the mainline platforms with the London Underground.

However, over the past few years, work has been going on behind the hoardings to convert the rest of the space into three floors of shopping, and the shopping centre has opened, but minus most of the shops. So at the moment, there’s a large and largely empty shopping centre that’s open to the public to explore, even though there’s nothing much to see down here.

And that is precisely why you really should visit it right now.

For something that’s brand new and, in places still being finished off, there’s a curious air of desolation and abandonment down here. Probably accentuated by recent developments in high streets across the country where shops have closed down thanks to the combination of online shopping and a pandemic, leaving high streets punctured by empty windows.

At the moment, The Sidings is more of a high street that has a handful of shops and a lot of empty windows though.

It’s fully open to the public, even though you feel that maybe you’re not supposed to be down here in this empty void, which only adds to the eerie yet exciting atmosphere as you wander around. A few staff are wandering around in builder’s gear finishing off corners or preparing shops to open. On the upper of the three floors, there’s a wide set of ticket barriers leading up to the platforms, and escalators down to the lower levels.

The very lowest floor is still waiting to be finished, so you finally stumble upon a barrier that shall not be passed. Well, not yet.

A number of tenants have signed up after Time Out pulled out, so instead of the expected food hall, there are a lot of coffee shops and the usual chains of sandwiches announced so far. They have 37 shops to fill, so maybe there will be a wider range later on.

Although the bar calling itself the Lost Property Office may rue the day when they spend half their time telling people that no, they’re not that sort of lost property office.

Costa was open and empty. Pret was open and had a handful of customers. WHSmith was open, and is one of their branches that is more sandwiches than books and mags, and had a very bored-looking cashier. And no carpet. An Alice in Wonderland theme-based thingymajig of some sort or other is opening soon. A large Sainsbury’s is promised, but they have decided to be closer to the station concourse than hidden down in the shopping mall.

And at the far end is the gargantuan Brewdog pub, which was written about by Diamond Geezer, and ripped off by serial ripper off’r in chief, MyLondon.

Lots of signs in the empty stores suggest the shopping centre will be “a good excuse to get the later train”, which may be optimistic if the options are coffee, beer or sandwiches.

But do visit at the moment while it’s still an undiscovered space waiting for the empty shops to be filled in and the shoppers to arrive.

It’s quite an odd experience.

There are a number of entrances to The Sidings, but the easiest to find is where the old Eurostar platforms are in Waterloo station’s main concourse and go down the stairs to the shopping centre. 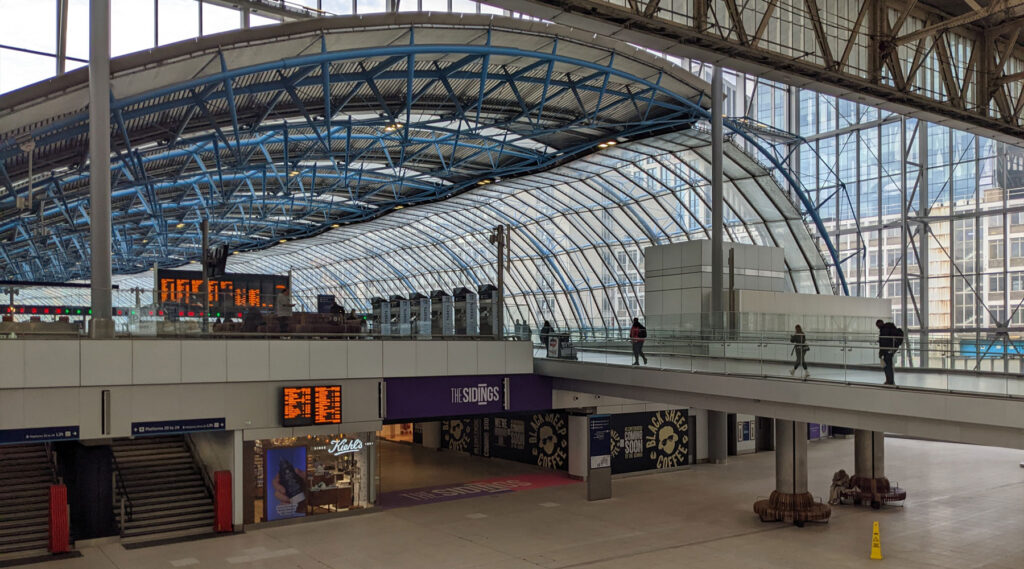 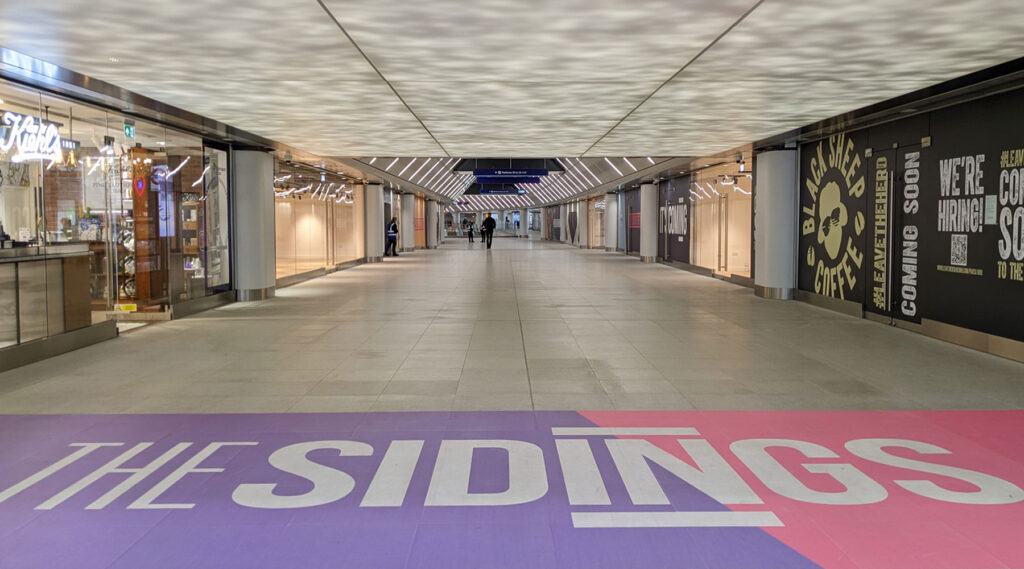 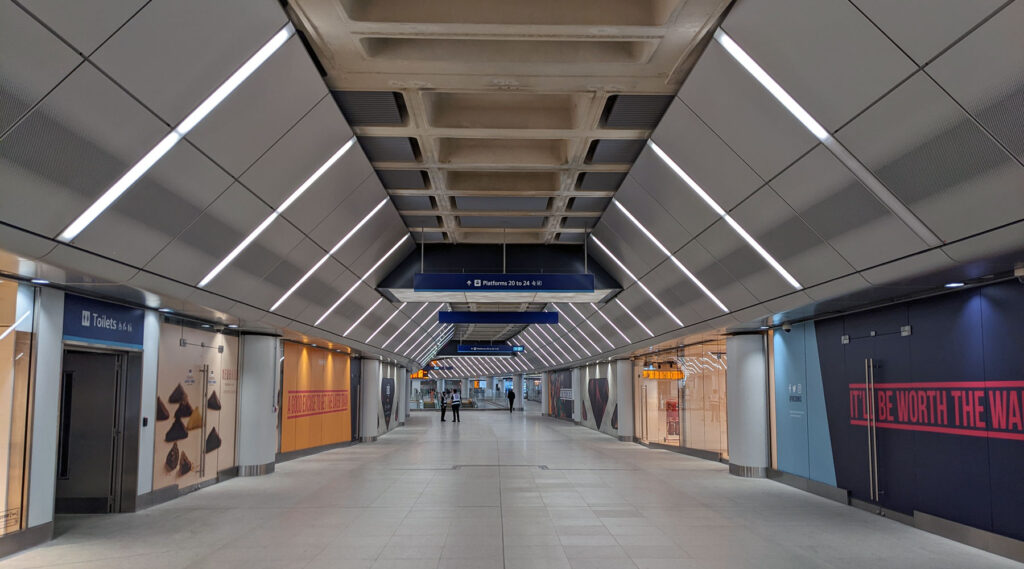 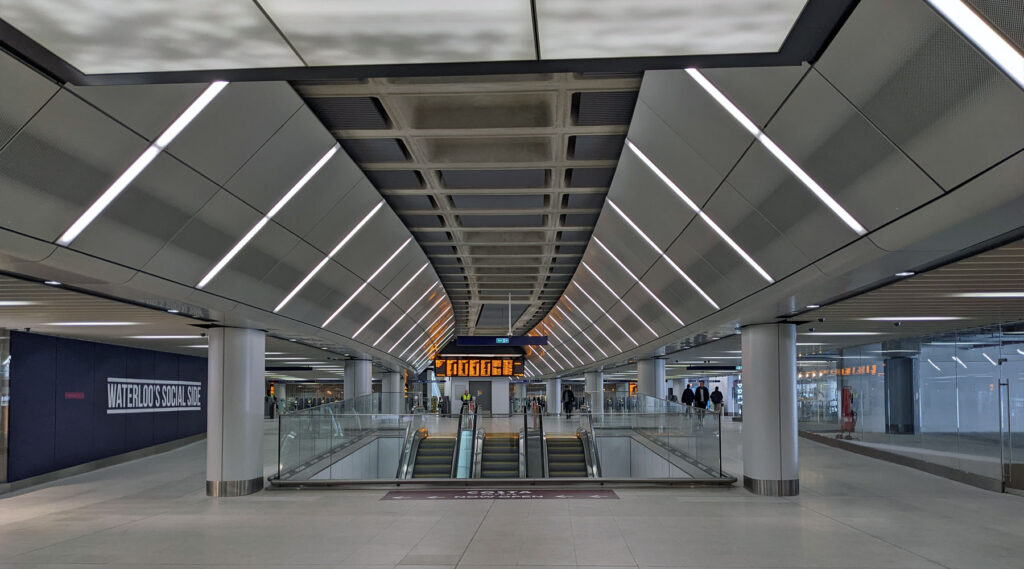 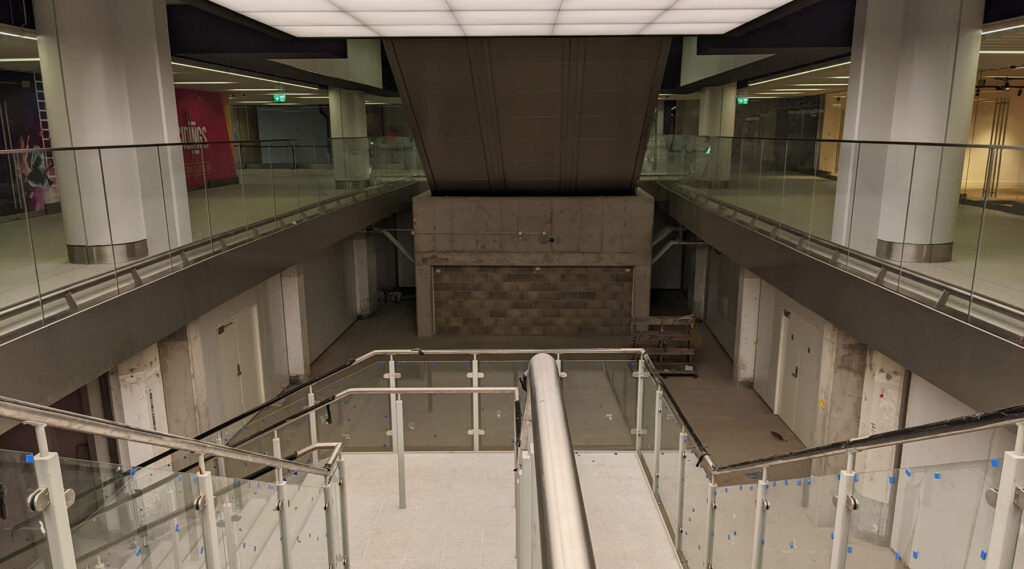 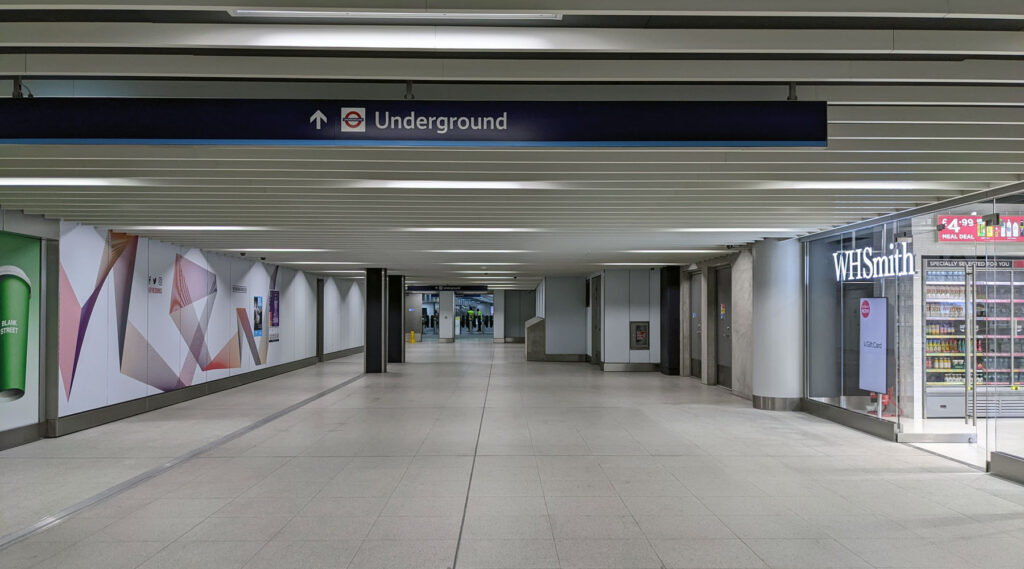 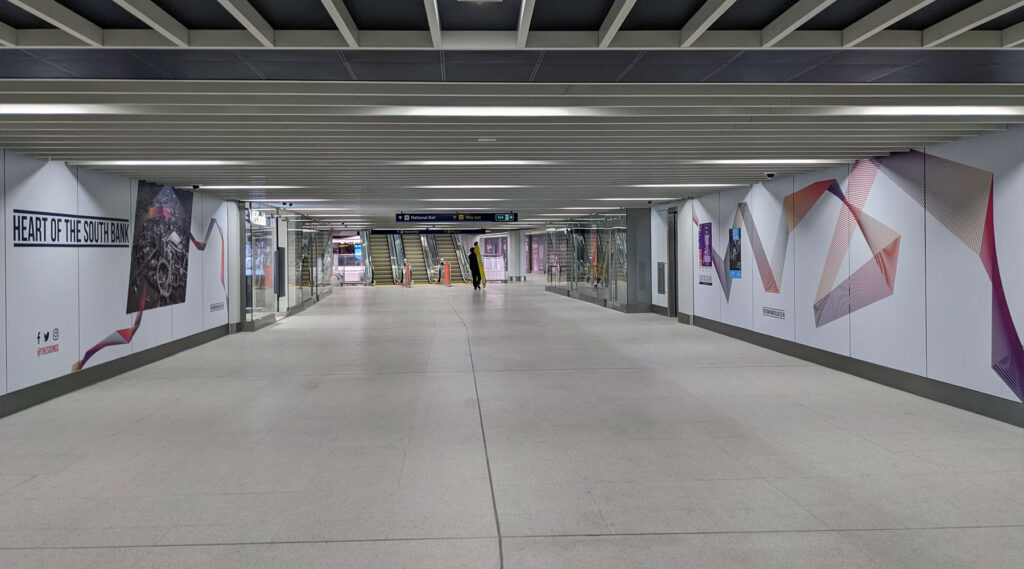 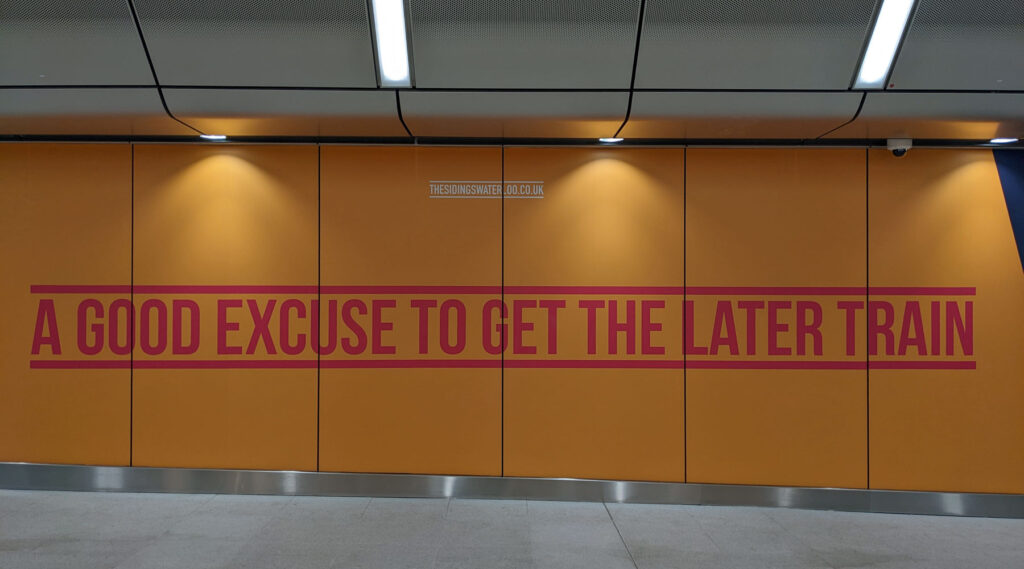