Teachbytes
Home Sports The Vikings Players Are in Charge Now 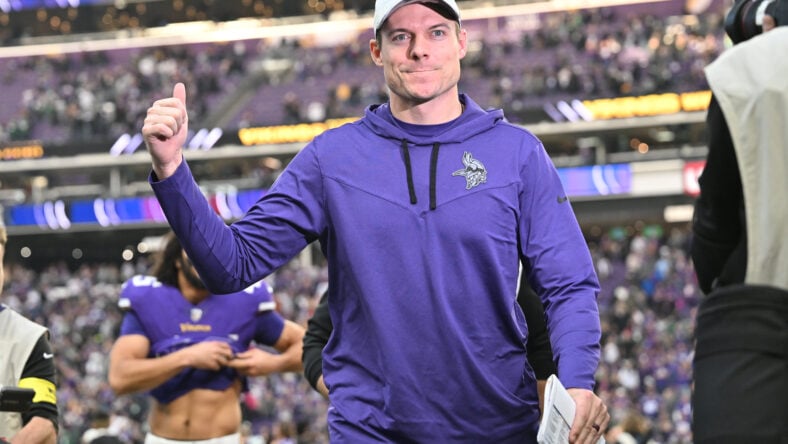 The tension rises a few days before the Vikings will play their first playoff contest in three years and the first postseason game at home in five years, a game in which Case Keenum found Stefon Diggs for a miracle ending to eliminate the Saints.

Minnesota’s team is led by first-year head coach Kevin O’Connell, a former quarterback who preached situational awareness all offseason. That paid off with an 11-0 record in one-score games.

The energy and the culture in the building completely changed in just one year with the young coach in charge. One of the many offseason changes was implementing a new defensive scheme under defensive coordinator Ed Donatell. However, the defense is a big concern leading up to the postseason. Only the Detroit Lions gave up more yards in 2022.

The Vikings Players Are in Charge Now

Opposing quarterbacks had field days against the purple team all season long, including low-end starters like Mac Jones and Mike White. Giants quarterback Daniel Jones is a much better player than the two, especially in 2022.

He already went up against the Vikings on Christmas Eve and recorded his second-best passing yardage output of the season with 334 in addition to 34 rushing yards. The Vikings have to make sure to put together some good defensive games in the postseason.

Minnesota’s defensive players are aware of the struggles and the importance of the playoff game. Donatell talked to the media on Thursday leading up to the game and emphasized that the players are taking a leadership role.

One of the Vikings strengths is the plethora of experienced players on defense. Eric Kendricks and Danielle Hunter entered the league in 2015, just like 2022 free-agent signings Za’Darius Smith and Jordan Hicks. Three years before that, Vikings safety Harrison Smith was drafted by former GM Rick Spielman.

Cornerback Patrick Peterson was a 2011 first-round pick. Both defensive tackles Harrison Phillips and Dalvin Tomlinson signed their second career contracts with the Vikings. Few NFL teams are as experienced on defense as the Vikings. The negative effect is that some players are no longer in their physical primes and have lost a step.

Donatell has been in the league for a long time and knows how vital veteran leadership is. Players might get nervous the days before the game, and the veterans need to step up. Peterson is an eight-time Pro Bowler and the 32-year-old who has seen everything the league offers.

Vikings fans did not like many games of the Vikings defense in 2022, so his remark that folks would like how the defensive unit will play is interesting. Players taking accountability and trying to be more involved in the preparation of the game is an encouraging sign of things to come.

The Vikings are 6-0 when they held their opponents to fewer than 24 points, a number that should be achievable for every defense. Only two teams allowed more points than the Vikings, and only the Lions and the Bears allowed more yards per play.

One thing the Vikings do well is creating turnovers. The 25 turnovers rank the Vikings eighth in the league. Whatever the team has to change to get better results is precisely what they should do. Including the players more might be one step toward improvement.

Janik Eckardt is a football fan who likes numbers and stats. The Vikings became his favorite team despite their quarterback at the time, Christian Ponder. He is a walking soccer encyclopedia, loves watching sitcoms, and Classic rock is his music genre of choice. Follow him on Twitter if you like the Vikings: @JanikEckardt

The post The Vikings Players Are in Charge Now appeared first on Vikings Territory.

GOP one seat away from securing House majority