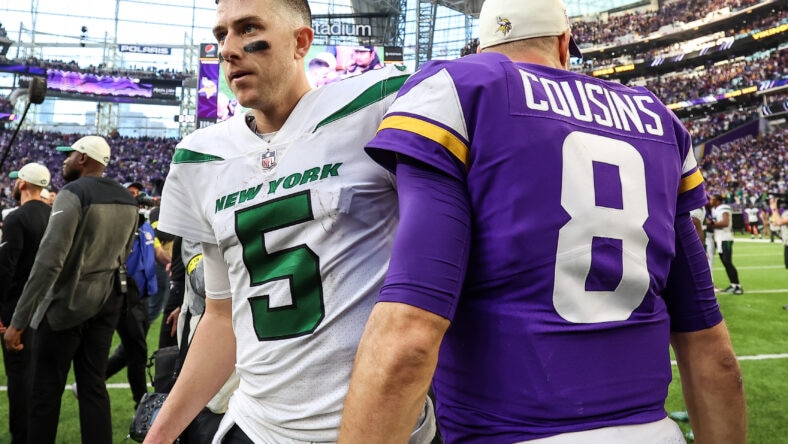 The Minnesota Vikings are 10-2 this season, but it doesn’t really feel like it. Don’t get me wrong, within the confines of North Star State and extending throughout portions of the upper midwest, the purple faithful are rejoicing. But beyond that, the respect is not on par with other teams with worse records throughout the league.

Laying in the weeds racking up wins while other, more notable teams, are taking “L’s” accompanied with excuses should be totally fine with the Vikings. If they keep up the pace, they’ll guarantee at least one home game in the playoffs and maybe more.

But even beyond flying under the radar in “flyover country,” Vikings fans and players alike should be finding some level of solace in what the team has already accomplished along the way. Scratching and clawing their way to a 10-2 record, the Vikings are finding themselves becoming more battle-tested for what’s to come just around the corner in the playoffs.

For one, after today’s 27-22 win over the Jets, the Vikings are 9-0 in one-score games. Sure, for the sake of all of our blood pressures, it would be nice to coast to a victory or two down the stretch, but at the same time, finding ways to win these close games will prepare this team for adversity down the stretch and in the playoffs.

They’ve faced dominating, physical defensive fronts like that of the Washington Commanders. And although Kirk Cousins was sacked 2 times and the team allowed 12 TFLs on the day, they found a way to settle in late in the game, put on their big boy pants, and protect the pocket when it mattered most.

Similarly, they faced maybe the fastest defensive unit in the entire league on Sunday in the Jets. While things got hairy for a bit in the 3rd quarter as the Vikings were only able to muster up 10 yards on 10 plays on their way to zero points, they found a way to crack the code for their first drive in the 4th quarter, which went 7 plays for 75 yards and a touchdown to Justin Jefferson.

They don’t give up. They don’t wave the white flag. They find a way to make it happen and remain resilient despite the ebbs and flows of a close game.

If I’m not mistaken, close football games dominated by fast and physical defenses — that sounds like playoff football to me, and the Vikings have been playing this brand of ball almost the entire season. While you don’t forget the two losses against the Eagles and Cowboys, you can wipe that slate clean and build off the victories while learning from the losses as you prepare your mindset and health heading into the playoffs.

All of these lessons learned will help this team down the stretch as they lobby for position and carry momentum into the postseason.

The post The Vikings Road to 10-2 Has Them Battle-Tested for Playoff Football appeared first on Vikings Territory.

Team Canada to take on the Swiss in quarterfinals at World...

Parliament Could Sit For Extra Days Next Week After Queen’s Death...

This Minimalist 3-Piece Outfit Is Perfect for the Holidays