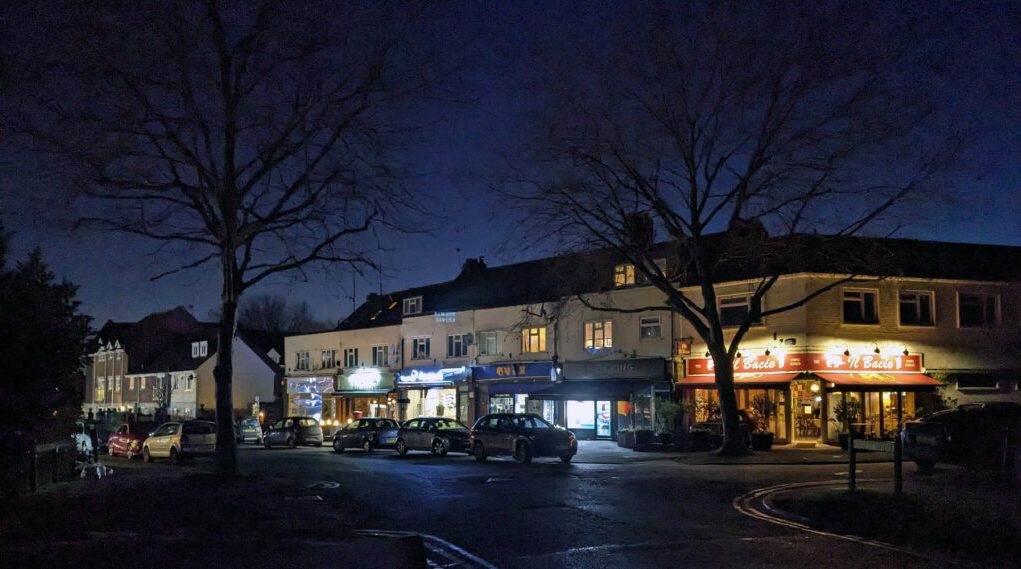 Theydon Bois, on the edge of northeast London, is remarkable for something very special — the near total absence of any street lighting. This is a photo of a row of shops, and while they glow brightly at night, notice the lack of street lights. 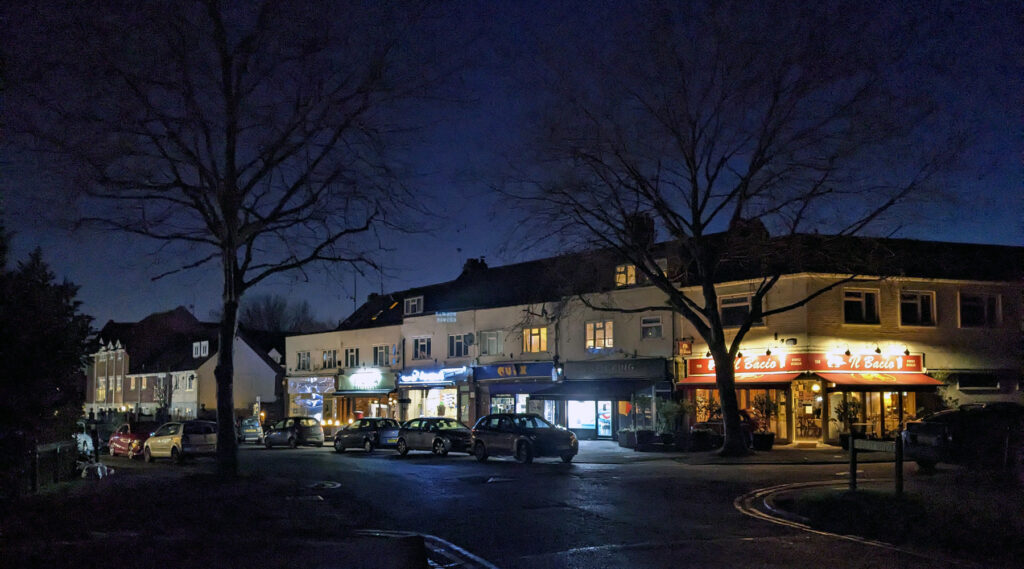 The rest of Theydon Bois is the same, without the shops of course, and hence it’s a remarkable place to visit after dark, as it’s one of the best places to go star gazing.

On a clear night of course.

Quite why Theydon Bois is so dark and lacking in street lights seems a bit difficult to pin down definitively, although according to an article published in 2017, when the UK started rolling out a national electricity network as it reached Theydon Bois, the locals rejected the plans to add street lights as the cost came from their local rates.

Over the years, although the cost of street lighting is now funded by wider council taxes, local petitions to add street lights have been lost by the pro-lighting lobby as the majority of locals prefer the uniquely dark patch of the urban landscape. 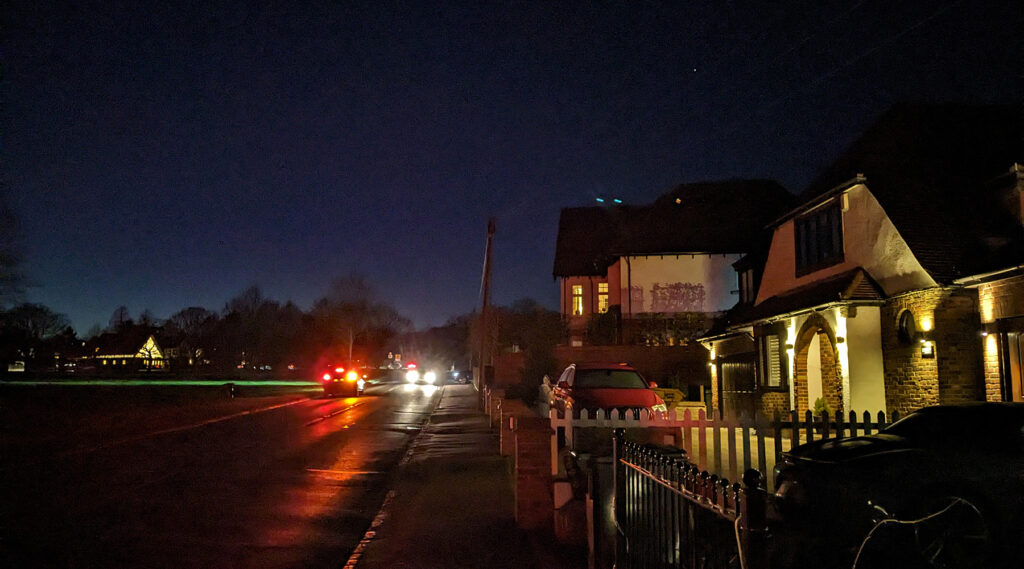 A visit to Theydon Bois is to depart a fairly normal looking tube station and walk down a normal street with street lights as you might expect, but turn a corner, and you immediately sense something is different. There’s a glowing pub and a restaurant to keep things lit, but it’s already noticeably darker, but not so much that you could almost fail to notice the lack of light pollution in the air.

It’s when you get into the village proper that you really start to notice the darkness, and it’s profoundly noticeable on the side streets. Not narrow side streets that might be expected to lack street lights, but full proper roads lined with houses all without the orange glow from a line of lamps above.

This is the moment you start to go ohhhh, and really pay attention to the darkness. Stars above your head usually blasted out of existence by street lamps are now visible as bright glowing dots in the skies. 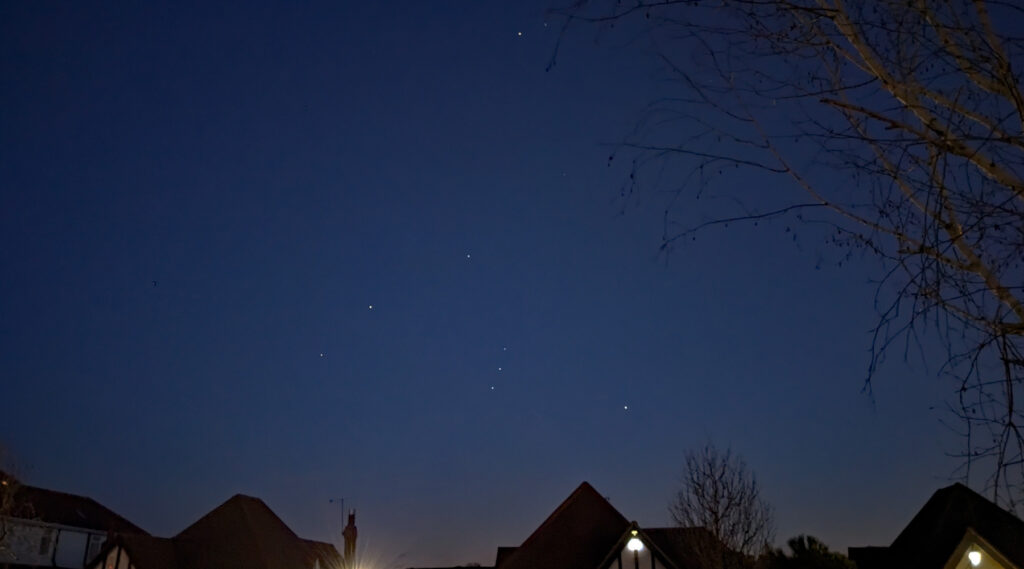 It’s not total darkness though, even away from the main road, as here, there is something else that dates back to the times before widespread street lighting — and that’s lighting on houses.

It was once expected that homes would assist in lighting streets by leaving a lantern outside or lighting up their front rooms on the ground floor. For example, in 1417, the Lord Mayor of London, Henry Barton passed a rule that houses had to hang lights outside homes during the winter months.

While not a formal rule, here in Theydon Bois, the social benefit of houses having their own lighting is not just decorative, but also gives just about enough light to see the pavements. Some houses had harsh nasty spot lamps, others were more security oriented with lamps that flooded the area as you walk past.

The best were the houses where people have been a bit more decorative and used the architecture of the house to create a very pleasing effect. 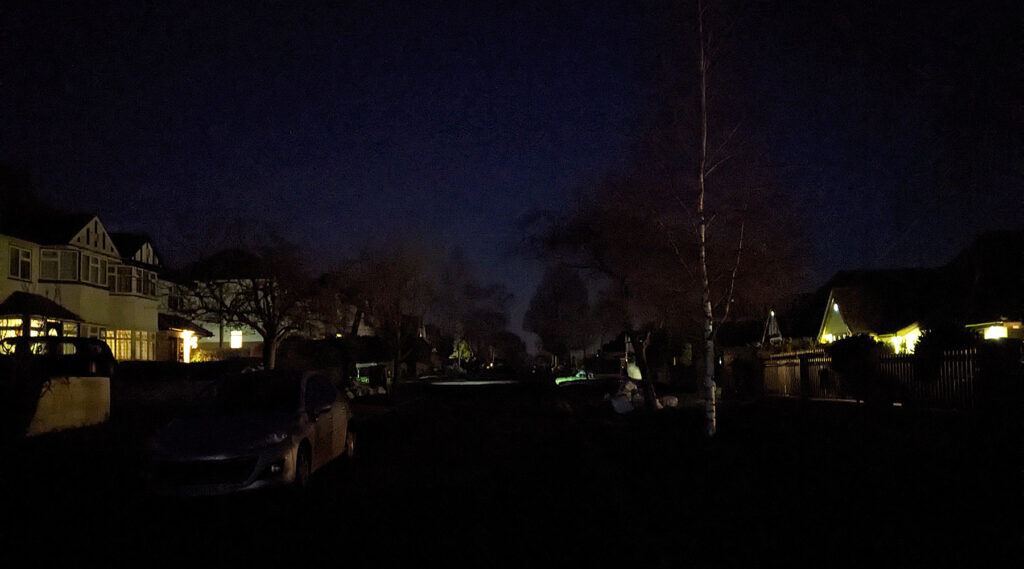 Where most of London has a flood of orange light bleeding away the colour and detail from the urban landscape, Theydon Bois is filled with droplets of architectural lighting delight as you wander around. The Tesco Express is municipally lit in garish cold lights, while The Bull pub exudes a warm rich glow that’s very inviting, especially on a cold night when the stars are bright. 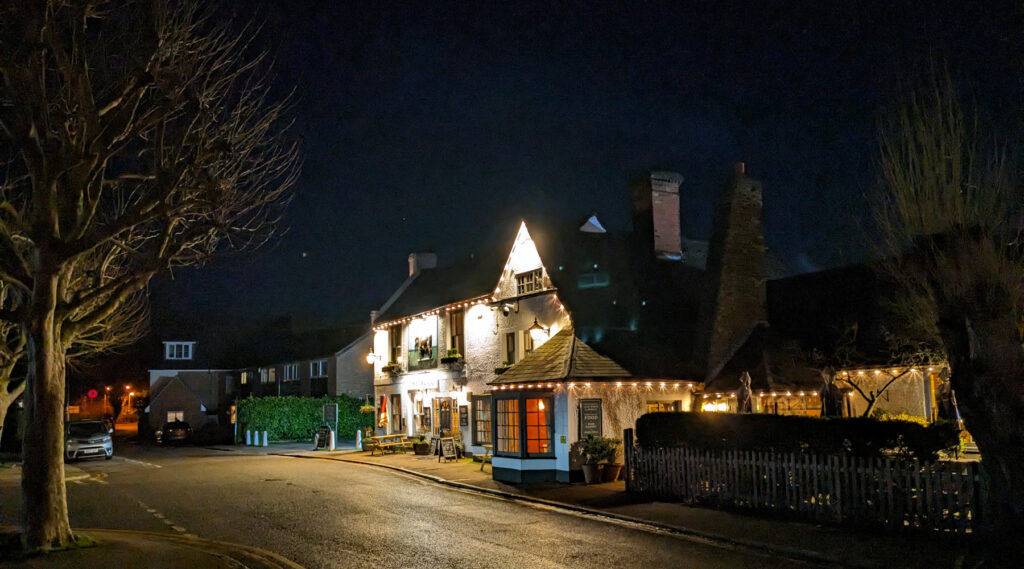 Thanks to the lack of street lights getting in the way, a local astronomy group is able to hold regular star gazing events, taking advantage of the darkness.

Wandering around the village it felt sureal, that exciting unusual experience that can be had when out for a walk when there’s a power cut. But here, it’s normal. People streaming out of the tube station didn’t seem to be bothered or taking extra care in the darkness.

Obviously, some armchair experts who don’t live there will worry about crime, but if that were a problem, don’t you think the locals will have noticed?

So Theydon Bois remains a village trapped in a century old appearance as street lamps remain banished and each evening, a comforting darkness falls soothing the eyes in a world that’s usually flooded with light.

Keep an eye out for a cloudless night and pop along to pay a visit, it’s a magical experience.

Now, if you’ll excuse me, I am off out to go and cut down some street lights where I live. 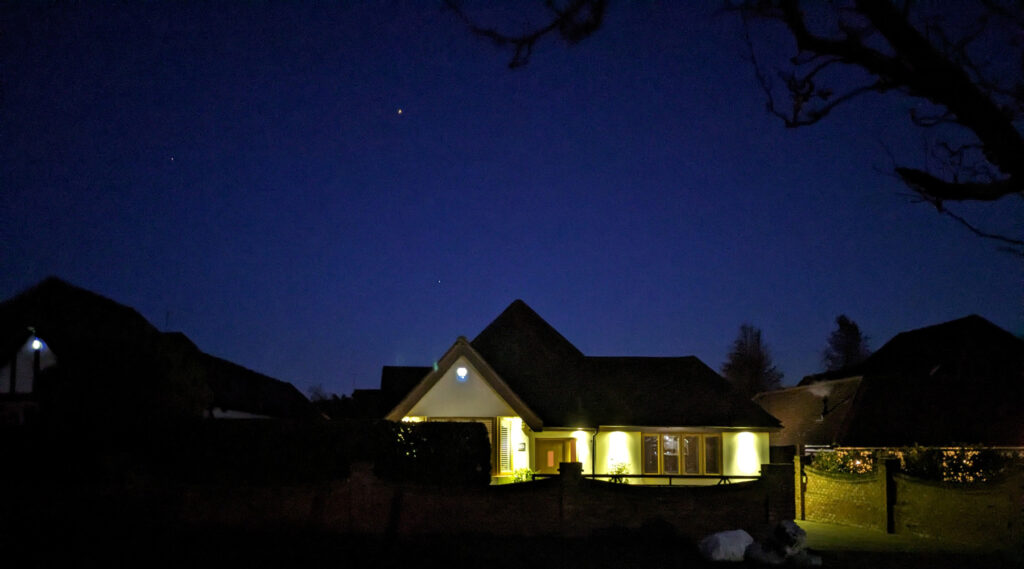 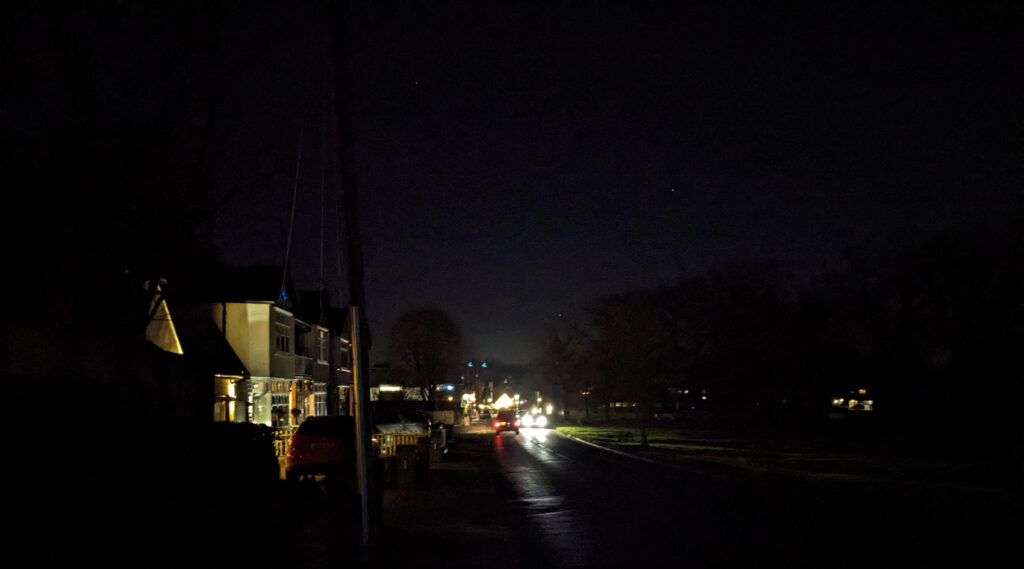 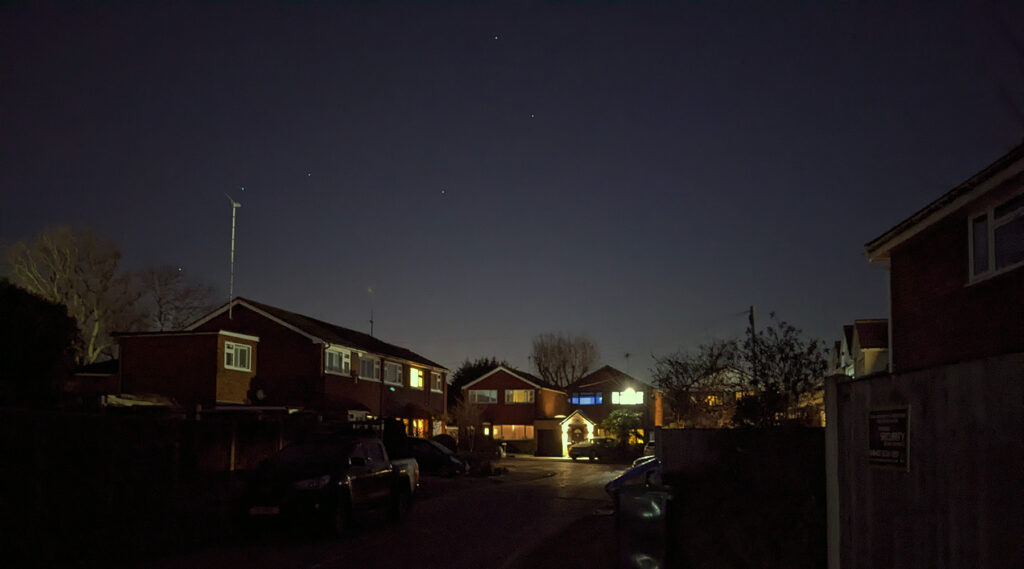 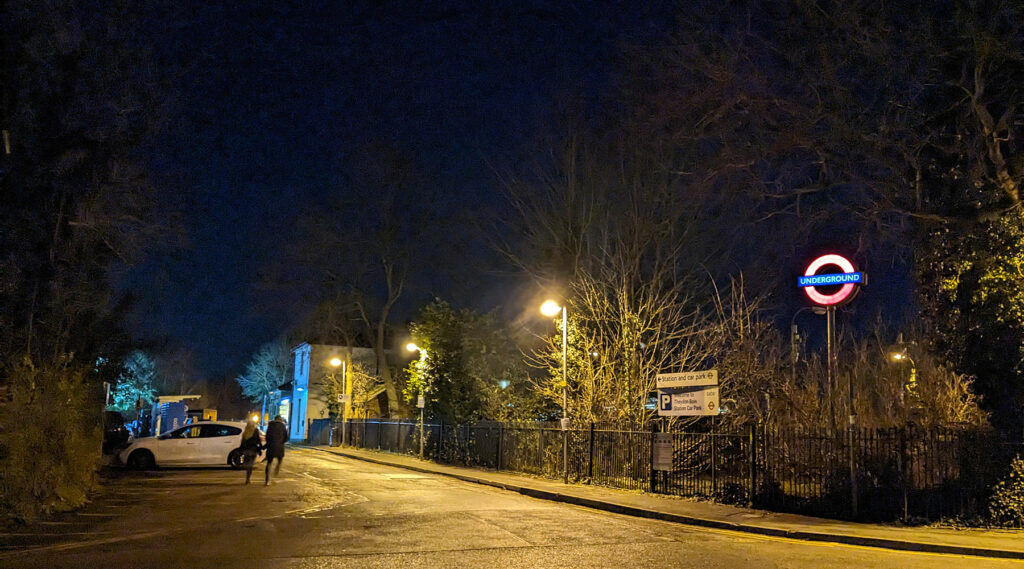 The one part of Theydon Bois that has street lamps

The post Theydon Bois – the town with no street lights appeared first on ianVisits.

Clarksville Parks and Recreation’s Christmas on the Cumberland returns to McGregor...